Visual testing is a technique to record tests that utilize browser-based interaction with the UI of the software or application under test. Test Studio, in tune with what’s wanted in the industry’s most rigorous testing efforts, is now equipped with a fully redesigned visual test recorder. How does this change what you already know about automation and most importantly—how will it help you do a better job as a tester?

Hello, fellow testers! How are you doing?

I am excited to present to you another blog post as part of the That’s Neat series. As some of you may already know, this series is dedicated to untangling exciting Test Studio features and how to best use them in your automation endeavors.

Visual or also known as codeless testing tools offer higher level abstractions for creating automated tests without relying on heavy and comprehensive automation frameworks. The codeless testing approach opens a whole new world in front of test and QA engineers—especially the ones that are early in their careers and not too familiar with writing test scripts.

Besides supporting end-to-end tests to cover a high variety of UI automation scenarios, some testing tools come with interfaces that allow more experienced engineers to tweak test steps or write custom tests from scratch if need be. And believe me, such flexibility is more often appreciated than not, especially when the app under test presents the tester with challenges that require advanced automation skills.

Why a New Visual Test Recorder?

Without further ado let's get right into it. With the last official Release of 2020, we at Test Studio further strenghtened one of the easiest record test and playback interfaces on the market. The recorder hosts some of Test Studio’s most popular and widely used features and has always been a key element of speeding automation, improving test quality, and reducing maintenance based on an entirely codeless testing experience. Yet, as it is with any technology, new generations come with new resolutions. And that is how we started making plans on how to make the Test Studio recorder best in class.

Besides the updated UX and the completely new UI, we equipped it with optimized performance by fully integrating it into the test automation workflow. Without taking up too much screen space, the new toolbar enables easy utilization of all of Test Studio’s useful, and mostly loved productivity-boosting features.

The toolbar to record tests that you love because it is so easy to use, now is even more enjoyable. It’s been transformed into a compact, yet fully functional toolbar featuring all the most useful and most needed functions.

You can easily pause and resume, enable the highlighting features, and even take advantage of advanced actions using the buttons in the toolbar to record tests. For those of you who want a seamless transition using the most useful record tests features we’ve got you covered—you can use the keyboard shortcuts. 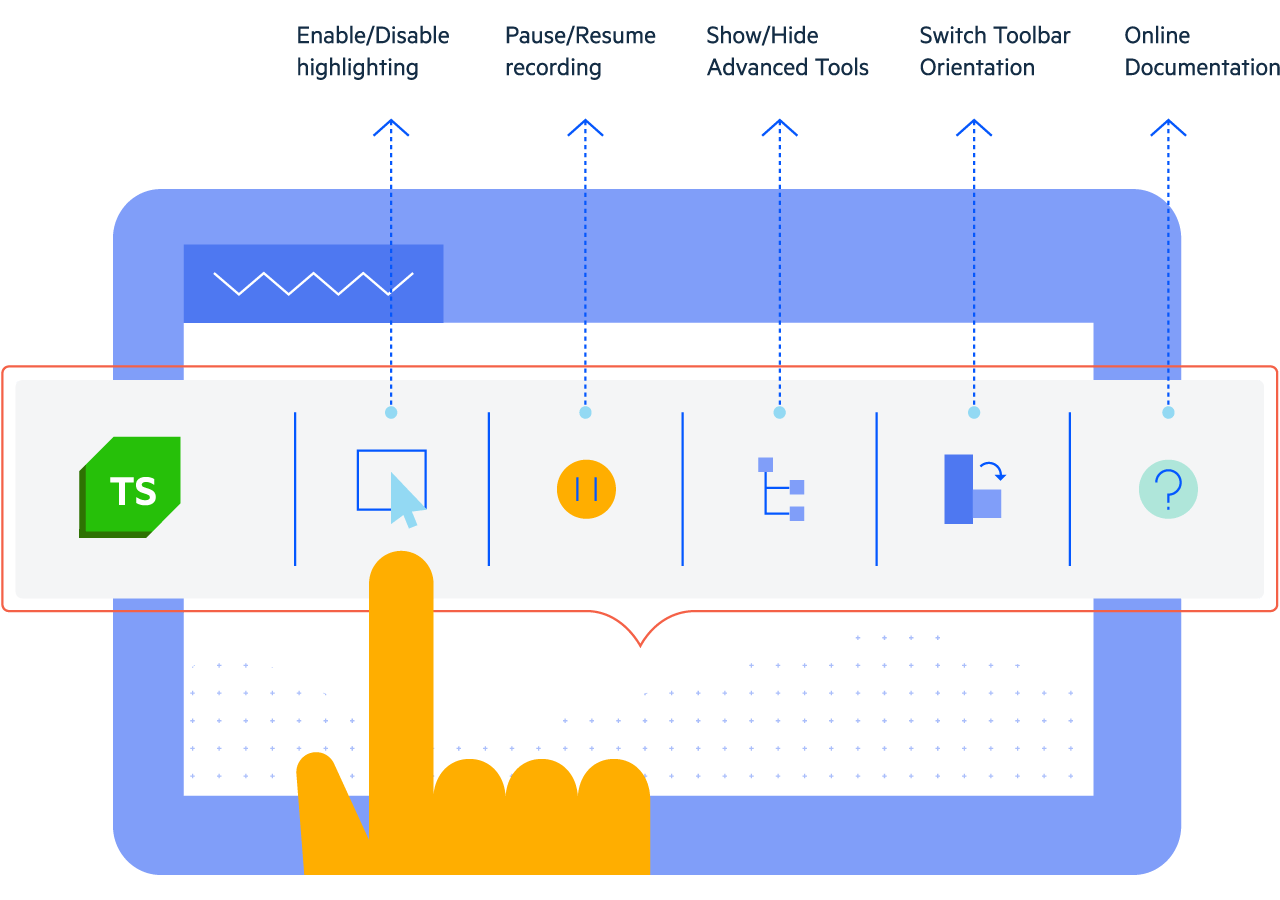 With the new UI our main goal is to improve visibility by leaving more screen space to focus on the important automation tasks, as for example to take full advantage of Test Studio’s OCR-powered text and image verification.

Because we know that the performance is a key factor in test automation we’ve implemented speed and performance optimizations resulting into much faster highlighter features and uninterrupted user experience.

Here is an example of how fast and easily you can build verifications against a cell in a Kendo UI for Angular Grid.

The test recorder panel got a total facelift and has transformed into the new Advanced Recording Tools. You can open it from the toolbar only if you need it while recording tests and editing advanced actions.

The redesigned toolbar comes with a logically organized menu in tabs, focusing on the most needed actions. It operates as a separate window that is detached from the browser for greater flexibility. It could be moved through the screen and resized in a way that fits your current automation scenario. This panel is enriched with new useful features so that it now provides easy access to the Step Builder as well as allows adding Common Steps or performing Browser Control actions.

One thing that we left untouched is Test Studio’s element find logic. And not just because it is the industry’s first object find approach, leveraging a combination between attribute-and image-based element identification. But mostly because this DOM/image interaction technique helps improve test stability and reduce the traditionally heavy test maintenance associated with visual testing tools.

Now you understand why we didn’t change that—and who would anyway?

You may wonder though, how the recorder accelerates testing based on this hybrid approach. The idea behind it is that it is capturing both the element’s find expression and its image. If the FindExpression fails, the execution will fall back to the predefined image and continue without interrupting the execution with the result of a more robust and stable test suite. I am sure you can imagine what that means for your most critical nightly pre-release builds.

We always strive to provide our customers with excellent test automation experiences and make sure new, user requested, and industry acclaimed features are shipped with each release of Test Studio.

After all, we are also QAs with a lot of bittersweet experience with the challenges of testing you are also struggling with. If you are new to Test Studio, give it a try. Don’t forget to share how you find Test Studio’s record test experience. Your feedback is appreciated and will help us deliver a better products. Because that is what we, testers, love and do best.