Test automation often puts QA and test engineers through a tough and time-consuming testing journey with product success or quality at stake. To make it a lot easier for test and QA engineers to adopt automated testing and take full advantage of its benefits, regardless of their expertise, we’ve further strengthened Test Studio with productivity hacks and improved automation workflows.

Where We Are in Testing

The dynamics of a modern development cycle have introduced test automation as an integral part of CI/CD and a major steppingstone on the way to continuous improvement. Automated testing doesn't have a stellar reputation though, imposing barriers on QA and test engineers rather than being the walk in the park promised by consultants and technology advocates. Setting up the automation ecosystem and making it work for everyone on the team is where teams and managers fail and turn off to long-term automation efforts.

Test Studio's third official release of 2020 ships with major product updates with a focus on improved UI through a fully reimagined Test Recorder, performance optimizations, updated recording experience and new translators for the most popular and widely used Telerik UI for Blazor components.

In the R3 2020 release, the Test Studio Recorder evolves into a tool that supports the QA and test engineers’ journey by allowing a full transition from manual to automated testing in the browser with cross-browser support and an unmatched, easy-to-use, and feature-rich Record & Playback experience.

The new user-friendly and intuitive recorder UI allows you to create codeless tests faster and with fewer hurdles, eliminating the complexity of coding and without sacrificing the test suite's stability and reliability. The UX improvements aim to boost productivity and reduce test flakiness while keeping maintenance to a minimum. What's more—test recording is now much faster thanks to optimized highlighter features and overall higher speed/performance. 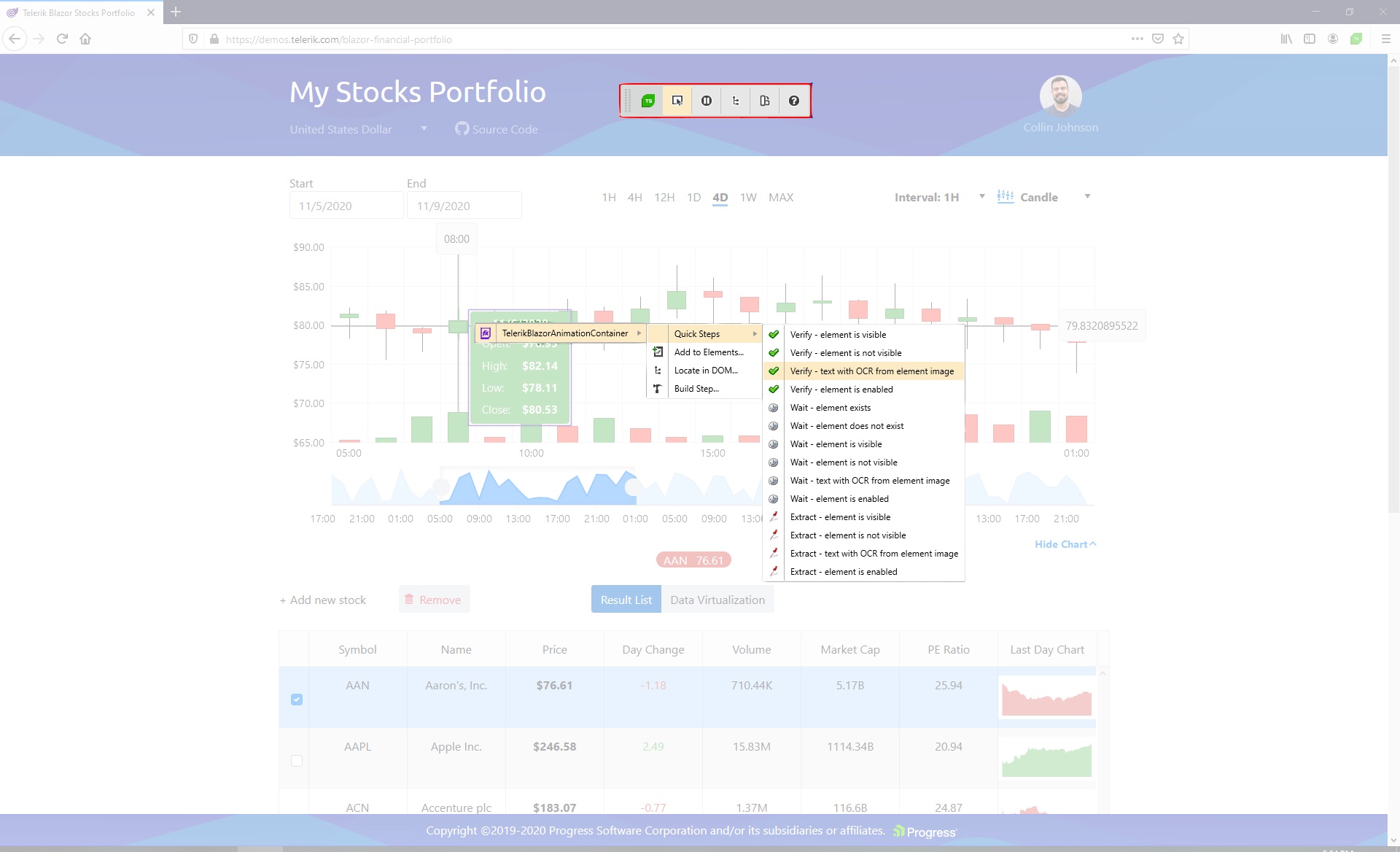 The new toolbar offers a logically organized menu in tabs and optimized highlighter functions, focusing on the most needed and most widely used actions. It provides the level of flexibility users have been looking for while staying true to its comprehensive nature of offering just what the user needs for easy and efficient codeless test automation.

The toolbar is detouched from the browser, can be moved freely through the screen and placed vertically or horizontally, wherever the testing scenario best allows for.

The Recorder UI can be used as a standalone tool to build tests upon mouse interaction, including the capability of being able to build steps with a mouse click. The codeless Recorder features are supported by Advanced Recording Tools, allowing to add common steps, control browser activities and go deeper into the Stepbuilder features for flexibility and additional horsepower supporting the creation of stable tests to cover any types of automation needs. 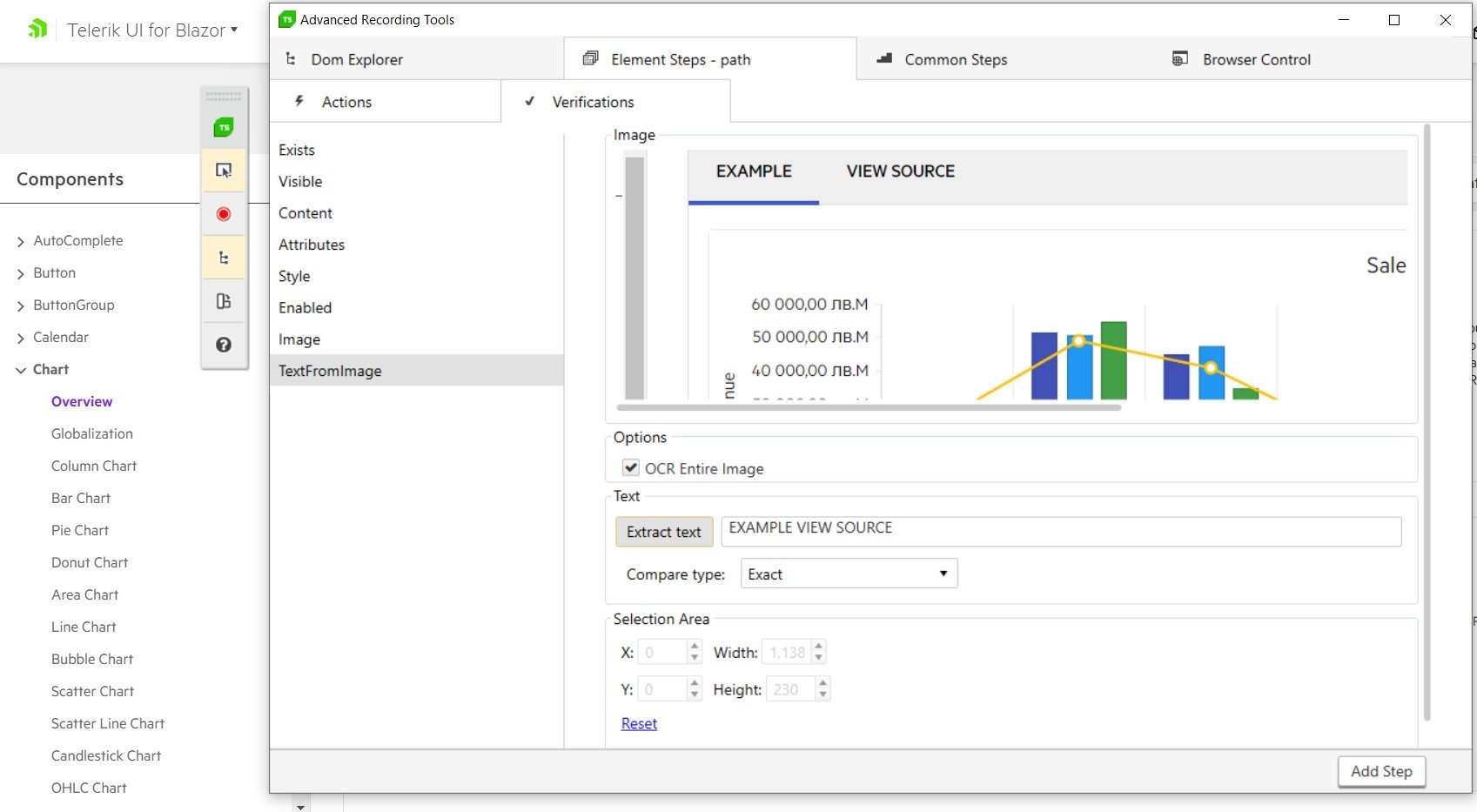 The new test recording experience greatly contributes to the codeless motion, which is on the rise to become the next big thing in automation. The natural blend of codeless and code-based automation capabilities in Test Studio allows the user to use coded steps, whenever necessary during automation, and ensures full coverage of testing scenarios and needs while fostering collaboration in mixed, multi-skills coded plus codeless testing environments.

Anyone who’s ever written a web application knows how important it is to have tools which work with you, not against you. Blazor and related tools make development much easier because of the great flexibility they bring. This is what inspired us to create the Telerik UI for Blazor suite.

To justify the long-term investment in Blazor as a technology though, teams need to make sure it helps them deliver the app quality demanded by users. While unit and stability testing of Blazor apps have been a top priority in software development before now, UI testing is gaining momentum as one of the ways for businesses to alleviate that pressure.

By adding new translators, Test Studio offers extended support for Telerik UI for Blazor components and allows for the automation of various component-related scenarios—fast, efficient and without additional effort.

The translator for the Telerik UI for Blazor Grid has been enhanced further to support grouping, sorting and expanding/collapsing the group Grid action. 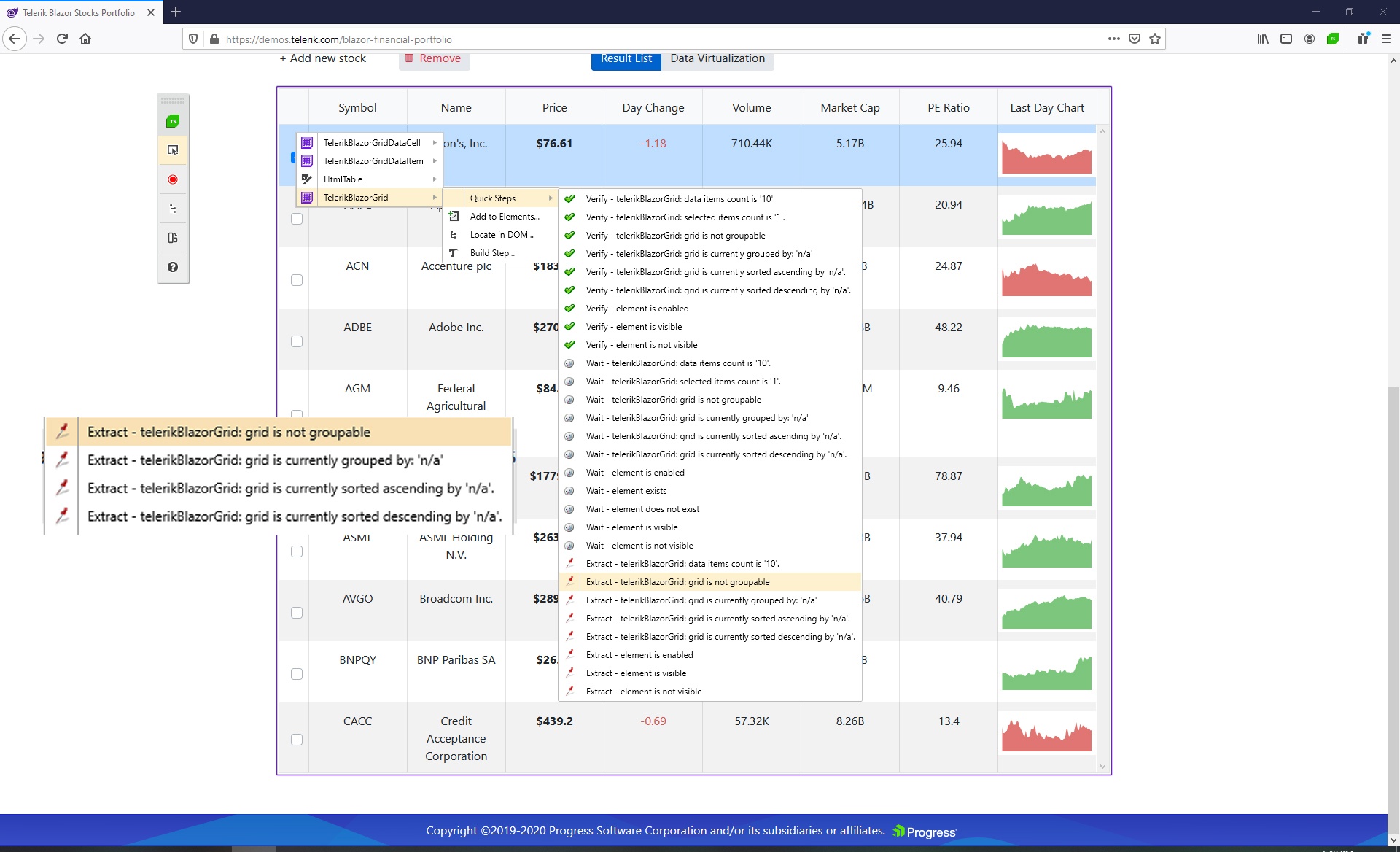 Additional translators have been added for Blazor TextBox and ComboBox to allow verification of selected content by text and index.

Blazor Window minimizing/resizing is now also supported out of the box along with Tabstrip, Animation Container, Drawer and ListView.

Test Studio’s approach to the automation of Telerik UI for Blazor components is based on built-in ready-to-use native translators that open the element and expose the specific and custom properties for action automation and verification. This genuinely native technology brings the user one step closer to the truly codeless testing approach in UI automation and should boost productivity in component-based app development enormously.

With R3 2020 a new Test Studio UI theme becomes available for both the Test Studio standalone IDE and the Visual Studio Plugin.

This feature allows users who prefer to work in dark-themed environments to take advantage of Test Studio's features in the preferred dark mode. Users that work in Visual Studio will especially enjoy the new theme as Test Studio now integrates not only seamlessly (via the Visual Studio Plugin), but also optically into the widely used dark mode of Visual Studio. 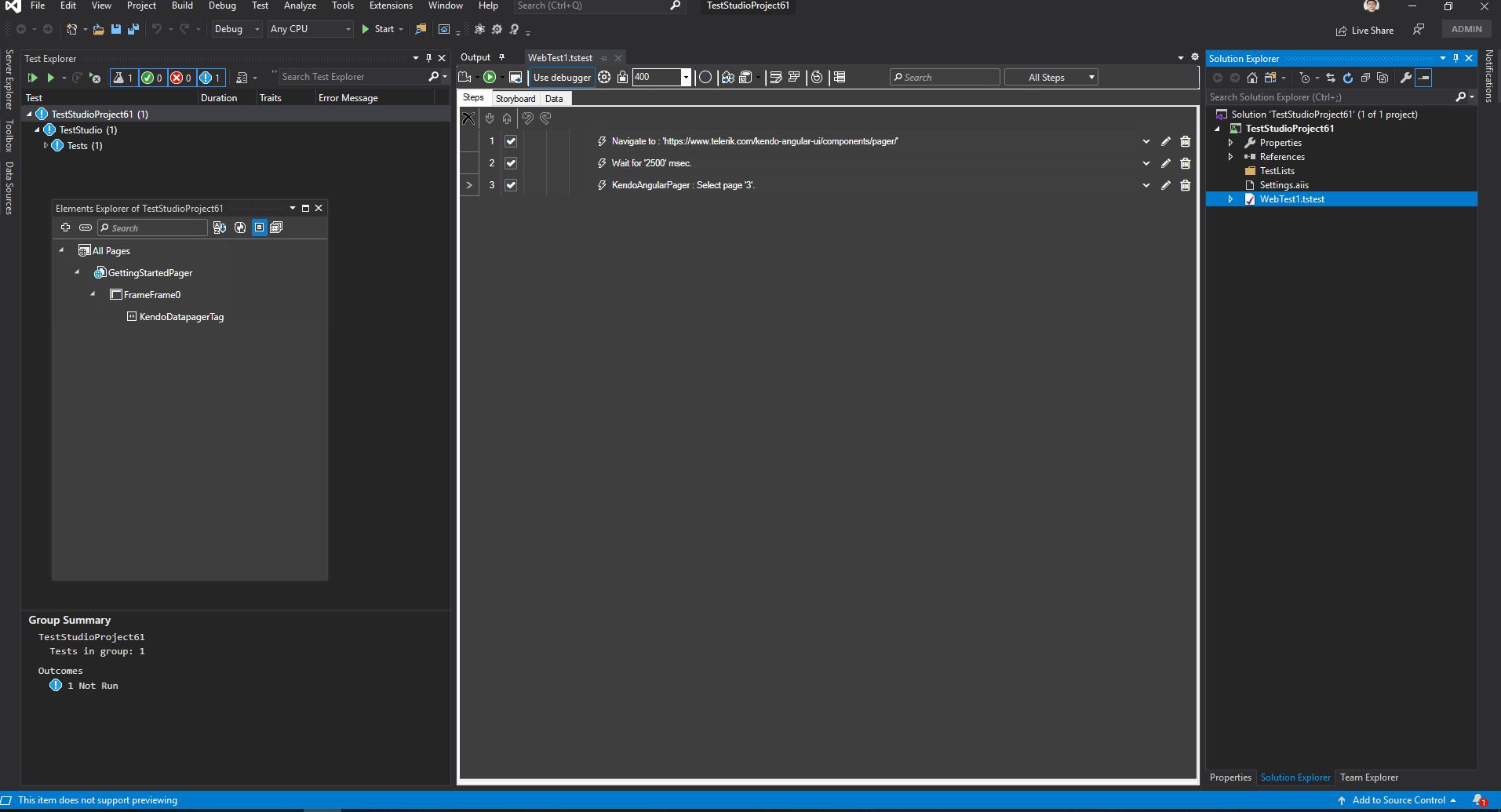 Try Everything in the Latest Release

Why Should Regression Testing Be the Top Go-To Practice in Your Test Automation Strategy?

Automated Tests for Chart Elements With OCR and Coded Steps—an Uphill Climb or a Lift Ride?