Learn what's new in the latest release of our DevCraft development tool suite, as we answer your questions from our release webinar.

Earlier this week, we hosted a webinar that highlighted everything new in the R3 2016 release of Telerik DevCraft. My co-hosts (Todd Motto, Ed Charbeneau and Sam Basu) and I had a wonderful time showing you the latest features in this release and answering your questions. I’d like to thank everyone who was able to attend. Taking time out of your busy schedule isn’t easy so we really appreciate it. As promised, a recording of the webinar has been posted to our YouTube channel.

A recording of the webinar is available on YouTube if you missed the webinar or just want to watch it again:

We also took the liberty of publishing the video of each product segment separately:

We’re trying to save you time so you can only watch the segments which interest you (without having to watch the entire webinar).

Historically, we’ve given a prize to the attendee who asks the best question during the webinar. This time is no different. The biggest problem we have is trying to find prizes that are cool enough for developers!

We decided to do something a little different for the R3 2016 release webinar of Telerik DevCraft. We invited attendees to ask questions via Twitter using the #AskTelerik hashtag: 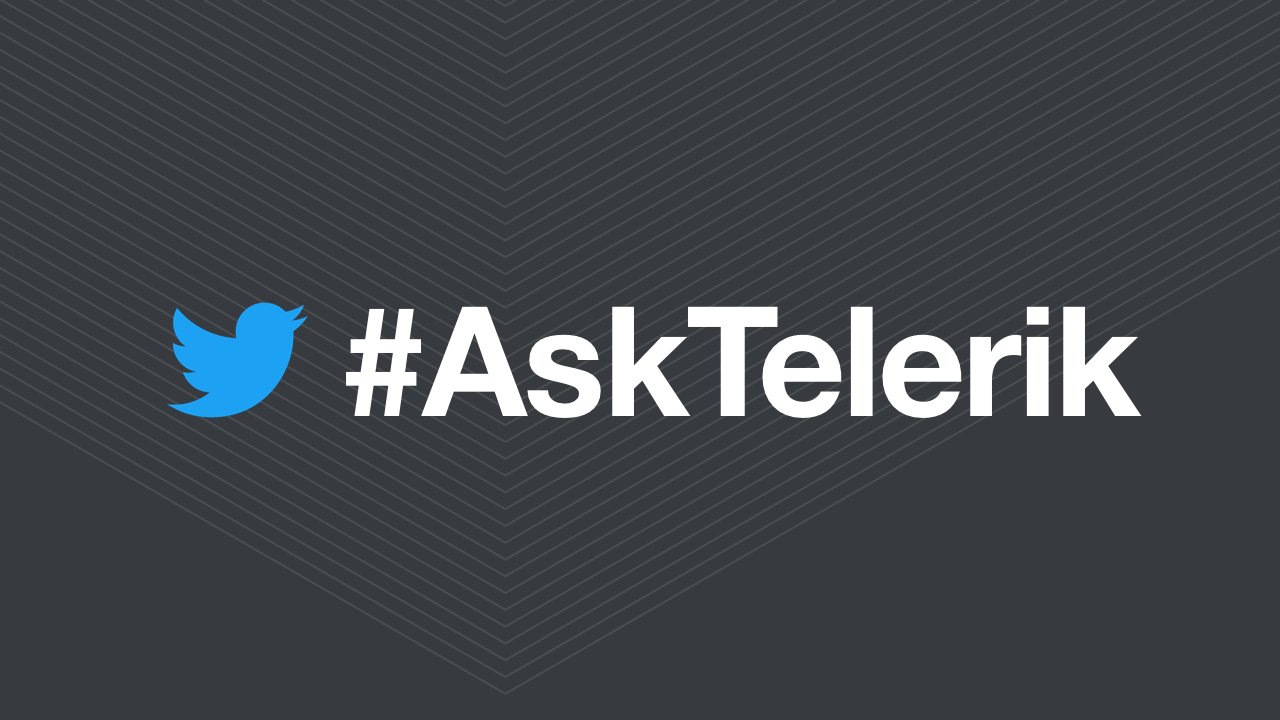 The volume of questions we received was insane. A lot of great questions were asked. For example:

Please check out the Twitter hashtag, #AskTelerik hashtag on Twitter f you want to see the rest of the questions along with our answers.

We also had many excellent questions come in through the INXPO webinar. Here’s a few of them:

The sparkline is impressive. Are there any options for auto drill-in?
Not out-of-the-box. However, you could utilize the API to achieve this.

Any improvements done on events for the TabStrip control?
Not for this release. If you have any feedback, please let us know! You can send us a suggestion through our feedback portal or submit an issue to the Kendo UI Core repository on GitHub.

Is there an example of implementing an endpoint that’s targetted by the saveUrl configuration parameter for the Upload control?
I’d recommend the article, Sending HTML Form Data in ASP.NET Web API: File Upload and Multipart MIME. It includes code source on how to do this.

I use the Spreadsheet processing extensively. What additional support and enhancements have been added?
Spreadsheets are all about data entry, so a number of enhancements have been made to the Spreadsheet. The most notable is the support for custom editors providing the ability to add any Kendo UI widget to a cell. Also included is the ability to select date/time values from a picker and the ability to select values from a list. Additionally, support has been added for using defined names in formulas, which allow for the naming of a cell range, function or constant.

Have you added anything in Telerik UI for ASP.NET Core that makes it easier to utilize the screen’s width on the high resolution monitors, thus eliminating the excess space for the right and left margins?
This seems related to Bootstrap or just CSS styles in general. You should try our whitepaper on Responsive Web Design as it explains how to eliminate margins and gutters in Bootstrap.

The Kendo UI upload control makes uploading of multiple files at a time very easy. But if you want to remove for example the second of 4 uploaded files that’s not possible. You could remove all 4 or none. Would be great if removing single files from a group of combined uploaded files is possible.
You’ll have access to the files array. You can mutate your state where needed inside the component class (for Angular 2).

Is all the documentation for angular 2 in TypeScript or is there plain JavaScript examples as well?
Mostly TypeScript, which I’d advise rolling with over ES6/ES5.

What is your recommendation when it comes to configuring your controls – use JQuery or Razor? Which is more performant and why?
It’s a matter of preference. Performance should be identical as the rendering is 100% the same. It depends on how much value you place on IntelliSense and comfort with JavaScript.

What about server side validation to ensure that users don’t just rename the files?
Typically the file would be associated with a unique hash/key so renaming files wouldn’t be an issue; they’ll only be able to rename them if you supply that functionality also.

It was impossible to set the focus in any of old RadPasswordBox text fields before. Have you fixed this issue in the new RadPasswordBox?
I assume you mean Telerik UI for ASP.NET AJAX. You should be able to set the focus with just a tiny bit of JavaScript. I’m unaware of any outstanding issues regarding this. Please contact support if you still have a problem after updating to the current version. They will help you very quickly.

I’m a novice. What is the editor/dev environment used in the Angular 2 demo?
Atom and Visual Studio Code are both good choices.

Are you considering to make Kendo UI full client side standalone framework?
Angular 2 is the framework, our Kendo UI for Angular 2 components are an extension and sit on top of the framework and are natively written with pure Angular 2 code. You’ll also be able to render them on the server with Angular Universal support, which is coming.

Does the Upload control have a size limit property?
Yes! Please see our documentation regarding validation. That stated, size limits are determined at the application and server level. By default, ASP.NET limits the size of the maximum upload to 4MB. Additionally, IIS 7 and later limits the request size to 30MB.

Would we be able to save these charts and graphs as image files rather than just being displayed in a webpage?
Yes, we have an export API worth checking out.

Where can we go to look at the different updates to the ASP.NET AJAX spreadsheet control?
Data entry was a big focus for this release. Many of the input control improvements made it into the spreadsheet. Also, please see our demos page for the Spreadsheet control.

Is Telerik UI for Xamarin included in DevCraft Complete?
No. It’s available in DevCraft Ultimate.

What is a ‘plonker’?
In proper British English, a plonker is a very fun term for ‘idiot’. However, Plunker is the tool you’re referring to I expect: http://plnkr.co.

Does the CheckBoxList in Telerik UI for ASP.NET AJAX support paging?
I don’t believe paging is a feature of the list controls. You could possibly achieve this with tabs or the RadWizard. If this is an important feature for you please leave us feedback at feedback.telerik.com.

We use C#.NET web forms only. We have deployed DevCraft R2 already. Will there be anything in R3 that we need for Web forms? We do not use MVC or AngularJS.
There are improvements in R3 for Webforms. There are a few new controls we will demo these. Two new theme builder themes. And new charts.

Thank you to those who attended the webinar and who asked questions after. As always, if you have a suggestion feel free to leave it in the comments here or on our feedback portal.