Advanced desktop testing features for a comprehensive Windows automation experience, extended technology coverage and AI-infused test stability is what the latest Test Studio release has in store for you.

In R2 2022, the Beta version of Test Studio desktop testing was introduced to help testing teams standardize their testing practices by being able to cover testing of Windows applications along with web test automation.

The Desktop Testing Beta provided the most important bits and pieces for functional desktop test automation, including the core test recording and execution functionality plus Element Repository and Test Lists. The Beta feature set allowed testers to start exploring desktop testing in Test Studio and record their first automated tests for desktop.

The R3 2022 release is here with the first official version of the desktop test automation feature set in Test Studio. Among the newly added functionality, you will find advanced automation capabilities for a holistic desktop testing approach and end-to-end experience.

Test Studio R3 2022 helps small- and large-scale dev and automation shops accelerate application delivery and cover all their web and desktop testing needs across a wide range of technologies and frameworks. Let’s look closer at what’s been released. 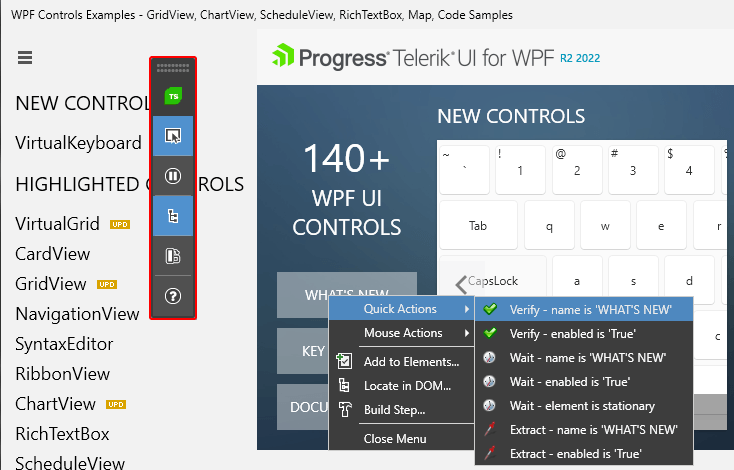 The Test Studio Test Recorder is known for its intuitive easy-to-use interface, which testers now can take advantage of to automate desktop applications. Besides the quick action and verification steps available for test recording, you can now access the Advanced Recording Tools with a lot of your favorite Test Studio features at your fingertips to cover any desktop test scenario.

One of Test Studio’s most loved features for web testing—the Advanced Recording Tools—is now available for desktop testing, including the DOM Explorer and the Common Steps. The DOM Explorer allows you to inspect elements in the DOM Tree and build steps for these elements. You can also enhance your desktop tests using all available Common Steps, such as Test as Step, API Test as Step, Coded Step, Delay, Custom Annotation, Manual Steps, etc. 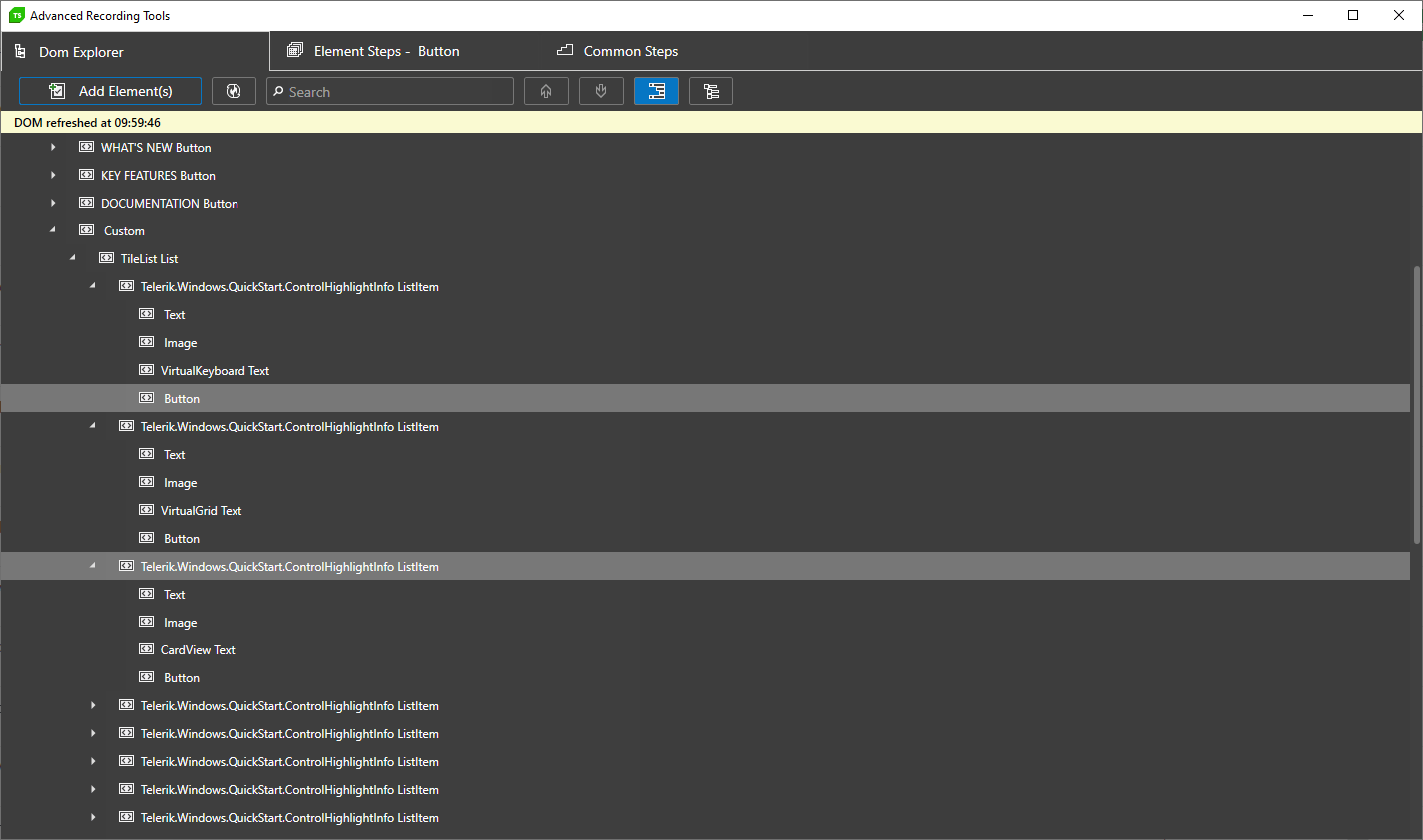 The Test Studio Test Recorder along with the Advanced Recording Tools make sure you have everything you need to design, build, enhance and maintain your desktop tests end-to-end, making them just as strong and stable as your web tests are.

Another feature testers need on daily basis is the Step Builder. One way of creating desktop tests is recording them through mouse-click interactions. Any self-respecting test engineer would need to go into the test and build additional quality gates to make sure the test verifies what it needs to the way it needs to.

You can do that by building steps for your desktop tests directly from the Step Builder. Steps can be added to pre-recorded tests to enhance the automation workflow you’ve recorded, e.g., add Execution Delay or build in all sorts of additional verifications.

This feature is very useful when you’ve recorded your test but then need to make it more stable and sustainable over time by means of additional action or verifications steps. On top of that, the Step Builder can be accessed “offline” with no app or with an active app running.

When used in an “offline” mode, outside of a recording session, the Step Builder allows you to add Quick Actions and Mouse Actions for elements that are stored in the Element Explorer. Previously, these were available only via the test recording toolbar while you were recording tests.

Test Studio plays extremely well with Visual Studio thanks to our built-in Visual Studio plugin. One of Test Studio’s features that more experienced testers enjoy using is its ability to edit recorded tests in code or enhance them with coded steps, using C#. 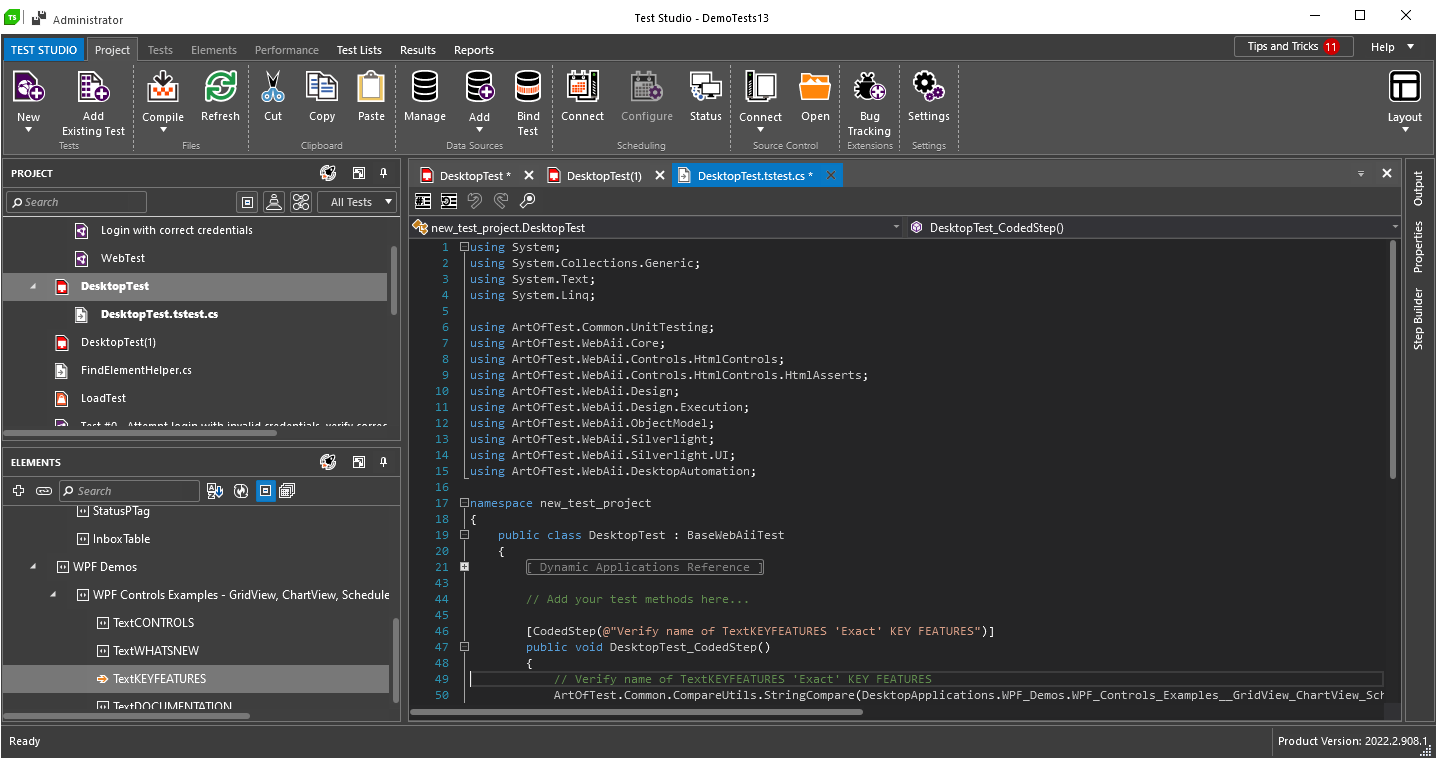 While this can be mastered to perfection for web testing, it is coming for you to try it out for Windows apps, both in the standalone application and within Visual Studio through our plugin. Test engineers will be able to record desktop tests directly in Visual Studio and utilize Test Studio’s advanced coding capabilities to solve basic or complex test scenarios.

Configure an App for Automation by Application User Model ID

Another feature that will greatly enhance the experience of test engineers with desktop testing in Test Studio is the option to configure Application User Model ID as an alternative to using an installation path to an app.

This feature provides tremendous flexibilities to users dealing with Universal Windows Apps (UWP), which is a whole new testing world to explore. By configuring a Windows app for automation by Application User Model ID, testers can set up Test Studio to access such applications a lot easier and faster, saving tons of time and enjoying a straightforward approach, without redundancies and automation hurdles.

One of the most noteworthy scenarios, where configuring apps for automation by using Application User Model ID is required, is testing of .NET MAUI-built applications. .NET MAUI is a framework for building native, cross-platform desktop and mobile apps from a single C# codebase across Android, iOS, Mac and Windows.

Recently, we at Progress launched the first of its kind Telerik UI for .NET MAUI component library with Day 0 .NET MAUI support and the biggest collection of components for you to start building applications using the .NET MAUI framework.

Test Studio supports .NET MAUI testing as long as the application under test is built for the Windows platform. The way .NET MAUI applications install and run requires the use of Application User Model ID for Test Studio to be able to access them for automation.

Before and After Test Studio R3 2022 Release

Many of our users already use Test Studio to automate their WPF-built applications, which falls into the desktop testing category. WPF testing in Test Studio has matured over the years to support a myriad of legacy applications our customers rely on.

The new desktop testing features though are part of a solution that we developed from the ground up as an evolution of what we’ve learned so far about desktop. It is based on the Microsoft UI Automation framework (UIA), which makes it possible for Test Studio to automate any Windows app (Win32 and .NET) which implements the UIA.

Besides the Microsoft stack, Test Studio covers test automation of hybrid applications, built with Electron (e.g., Spotify) and also Delphi. Test Studio will continue to improve with the goal of gradually offering the same strong and mature desktop test automation feature set you are used to from web testing.

The mechanism makes sure that elements are visible and correctly rendered on a page before running a test. This enhancement reduces test maintenance tremendously by avoiding random failures in both headless and headed-UI test execution on slow machines.

Supported by the industry’s first patented hybrid element find logic, Test Studio eliminates the level of test maintenance required for most web and desktop applications, while ensuring quality at speed. Test Studio offers exclusive out-of-the-box integration with Telerik and Kendo UI suites through built-in translators, now with full coverage of Telerik UI components for desktop, including WPF and the newly supported WinForms and WinUI—both standalone and via .NET MAUI. 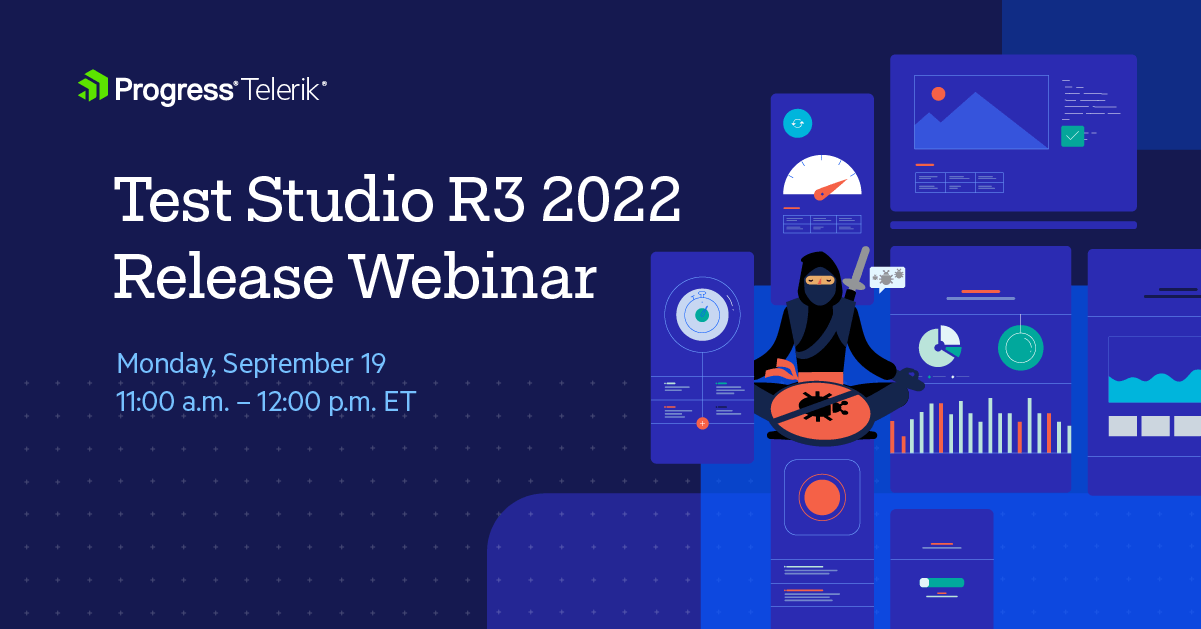 Join Us on Twitch Today

Live from Devreach’22 @ Progress360: Join the live community session from the Progress360 Streaming Studio on September 14 from 10 a.m. – 11:30 a.m. ET to hear the release highlights and celebrate the DevReach spirit with us at our Livestream Release Party.

And the Best Part About the Release Webinars?

The live webinars and Twitch sessions are a great opportunity for you to ask questions before and during the webinars. We’ll be waiting to hear from you on Twitter—just use the #heyTelerik and #heyKendoUI hashtags. Another great option is the live chat during our release session on CodeItLive, our Twitch channel.