The Future of Mobile App Testing and Telerik Platform

Telerik Mobile Testing is an automated functional/UI testing framework that allows developers and Quality Engineers to create tests in JavaScript using a set of easy-to-use APIs. Because testing is a key component of every successful software development project, including Mobile Testing as a default part of Telerik Platform was a no-brainer back in January 2014.

Whereas Telerik Mobile Testing was a great fit on day one, times have changed already. Recently you told us you see more value in another testing product Telerik offers, and maybe we should consider prioritizing support of that tool for mobile. Which got us thinking… 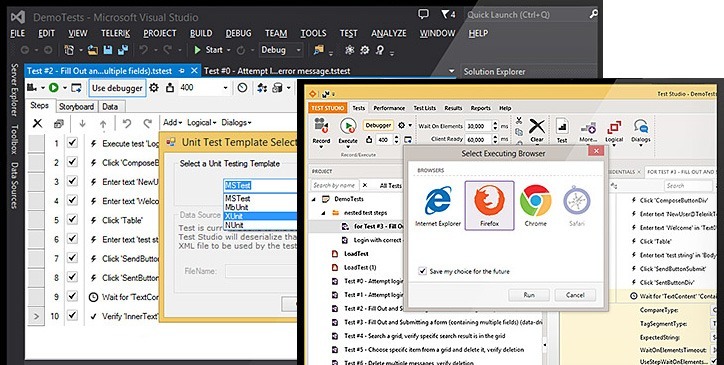 This “other product” was of course Test Studio solution, a powerful end-to-end testing/QA tool for web and desktop applications. Far more than just functional tests, Test Studio suite provides performance tests and load testing, as well. Let there be no mistake that when it comes to testing, Test Studio solution is tough to beat. This is especially true for our tester and QA customers. Telerik Mobile Testing could never match Test Studio solution for you. But what about mobile?

Recently, we announced the availability of Test Studio Mobile, everything you know and love about Test Studio solution, but now for testing mobile apps. Providing features like mobile load testing, native iOS testing, record/playback of mobile gestures, and integration with your CI workflow (coming in October for Android, early 2016 for iOS) Test Studio Mobile is already an amazing product.

As of mid-September, we will be removing Telerik Mobile Testing as an option in Telerik Platform. We wanted you to be aware of this ASAP so you can plan accordingly. And this is good news for Telerik Platform customers, as, going forward, you ​will see some amazing improvements to the testing story within Telerik Platform (and Telerik as a whole):


Product changes are always difficult, but we feel strongly that this is the best choice for our company and more importantly for you as mobile app developers and testers. We look forward to collaborating with you on the future of the Telerik Platform Test Studio Mobile!
Test Studio, Test Studio Mobile