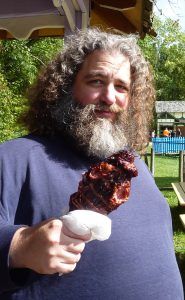 Guy started his career as gasp a COBOL programmer. But don't hold that against him, it just gives him perspective. He has spent much of his time programming in the most popular of the semi-colon delimited languages including C++, Java, and C#. Over the last couple of years he has been working with Ruby and JavaScript. One of these days he'll get around to learning Python.

In addition to programming computers, Guy had a background in electronics and enjoys building circuits, burning himself with a soldering iron, and programming small hardware devices such as the Arduino and the Raspberry Pi. No one has actually paid him to do this sort of work... yet.

Currently, Guy works for Pillar Technology in Columbus, Ohio where they pay him to do what he loves. He is also the chief organizer for the Columbus JavaScript User Group and is active in the local development community in Columbus.

In his personal life, Guy is a hard-boiled geek interested in role-playing games, science fiction, and technology. He also has a slightly less geeky interest in history and linguistics. In his spare time he volunteers as Cubmaster for his kids' Cub Scout Pack and studies Spanish.

Guy lives in Ohio with his wife, his three sons, and an entire wall of games. He attends church every Sunday—and actually pays attention—but he's not a prude about it.