Greetings, fellow testers. I'm excited to be joining the Telerik family, and I'll be sharing tips and tricks, ideas and suggestions with you here. I plan on providing a good bit of intro information for our new users as well as more in-depth articles for those of you who have already invested a good bit of time in Test Studio.

UI Automation is what brings most of us to Test Studio in the first place, but I want to start here by pointing out a component that's easily overlooked - Test Studio's support of manual testing. As Jim often says, there are plenty of tests that should not be automated. Checking element alignment on the page, for example, or that the right icon is being displayed — these sort of tests are much more quickly and easily done by the human eye.

Perhaps more imporantly for new users: Using Test Studio to organize and execute your existing manual tests is a great way to get started, giving quick visibility into the work you're already doing.

Most of us have used spreadsheets to keep track of tests, and we know the pain of keeping them updated, tracking which tests have passed and when, and reporting on them. Spreadsheets are great, but this just isn't a task for which they were built — especially when used by multiple people.

Enter Test Studio's manual testing management. Import your tests into Test Studio and forget about spreadsheets; test case editing, management and tracking become a snap. Your team can see which tests have been done and which haven't, and can easily note success or failures along the way. 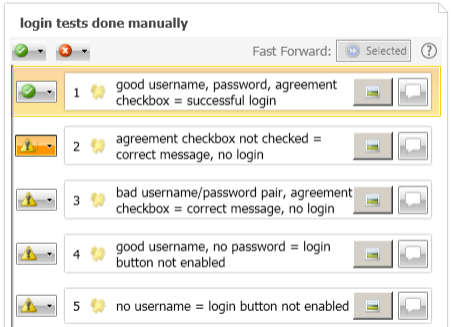 Now, as you're going through your tests, instead of wondering which cases passed or failed recently or which team members have up-to-date spreadsheets, you can be thinking more about which tests to automate first. Manual testing is often an overlooked feature of Test Studio. Give it a try and let me know how it works for you.