We all have seen situations where tests fail due to some random reasons – synchronization issues, temporary machine slowness, an unexpected dialog or error that has nothing to do with our application under test, etc. All these situations usually produce false-negative results. First of all these failures interrupt our nightly run and then we lose time to identify that the failure is not due to application bug or script issue. In most of these cases if you just re-run the failed test case it will pass. But doing this manually would consume time and your overall automation suite result remains failing.

We have solved this problem with the automatic re-run of failed tests inside a test list feature. Once the option is enabled, all the tests that fail during a test list run will be automatically re-run showing that into the generated result.

If all reruns pass, the overall test list status is “Pass”. Just to be sure that no issue would be missed, there is an indication that there were initially failing tests though.


*Available for Test Studio Ultimate and Web and Desktop

Analyzing a test failure reason sometimes can very time consuming even when the failing issue is easy to spot when you see it. Both running the scenario manually of re-running the automated test can take time especially if we have a long test with many steps. So, even if the issue is easily discoverable you may need to wait for it for some time which is boring and not productive.

For these cases we added the screen recording feature. When enabled it will record, depending on what you prefer – all the execution or only failing tests. Once the result is ready you can open the video and see what led to the failure and what really happened.
For more information how to use the feature you can take a look at that video.


*Available for Test Studio Ultimate and Web and Desktop

We’ve heard from many automation engineers that keeping the user session on a machine is a challenge. When you want to validate real actions or desktop commands on your application’s UI, you need to have an active UI session on the machine. And this active session usually gets disconnected due to some machine/domain settings or other rules.

We added an option to the Execution client to keep the active session so that all UI tests run unattended and seamlessly. You just need to open Test Studio Test Runner and enable the option. 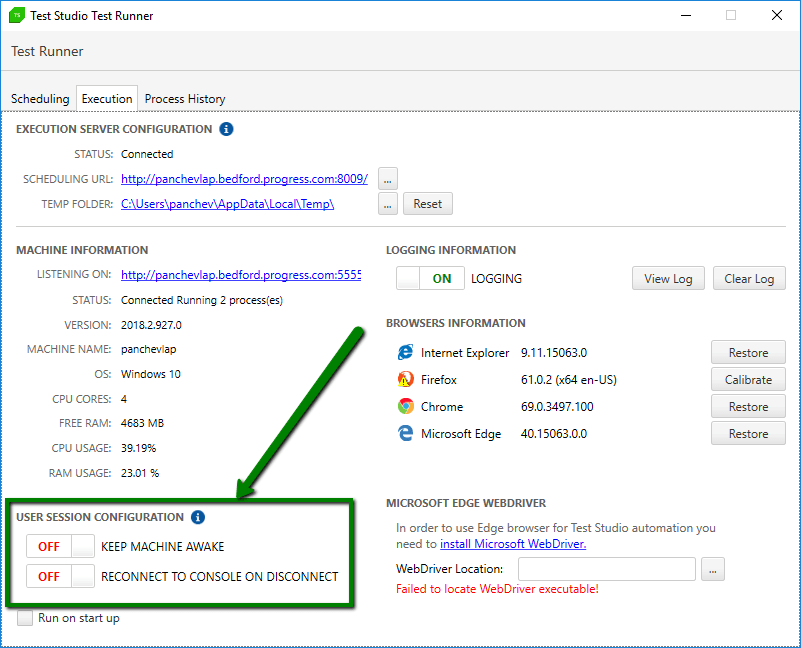 There is a new verification step that checks if and what JS errors are there on your website. If there are any expected errors, you can exclude them from the verification, so it does not fail because of them.

Browsers are constantly evolving. They come with a couple of official releases per year and few more updates. Some of these updates are changing the UI structure of the whole browser. This is impacting how Test Studio handles the dialog and notification windows. Hence after such breaking changes introduced by the browsers, Test Studio should be updated accordingly.

The good news is that for such cases we don’t need to put a whole release out and the user doesn’t need to upgrade to newer version of the Test Studio application anymore. From Test Studio R3 2018 onwards anyone with the latest major release, upon browser breaking change, will be able to download a very lightweight patch directly inside Test Studio’s UI. This patch is a minor one that does not upgrade the whole application, nor your projects. It holds no risk for your project, tests and Test Studio stability.