Telerik® Kendo UI® Q1 2016 is all about enhancing productivity and optimizing time-to-market when building any type of app UIs with HTML and JavaScript. Given that a key objective for businesses of any size is to reduce development costs and go to market as fast as possible without sacrificing features and functionality, we focused on this very aspect in our product with the first major Kendo UI release in 2016.

In Q1 2016 you will find new app templates and productivity enhancements in Kendo UI, a breadth of new Spreadsheet features and the widget itself going from Beta to RTM. There's also new grid filtering capabilities, ASP.NET 5 and MVC6 RC1 support and much more. Furthermore, we are unveiling our existing and continuing work to support the next versions of Angular 2, as we've already been pioneers with our Angular 2 Alpha support that we announced in Q3'15.

Read on to learn about everything new in the first Kendo UI release in 2016.

The new Spreadsheet widget, introduced as Beta in Q3’15 and instrumental for a variety of business applications, turns official with Q1 2016, adding a slew of new features to its arsenal. Some of the most notable are as follows: 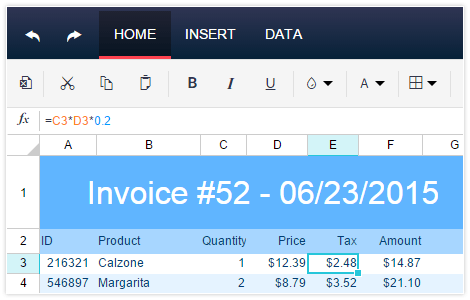 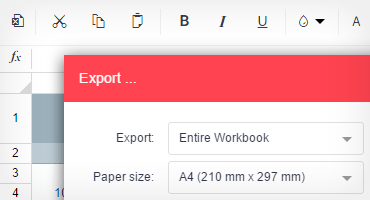 This feature set makes the spreadsheet widget ready for prime time, and gives you the essential functionality needed to integrate spreadsheet UI and behaviors in line-of-business applications.

You can see the demos yourself here.

In this release we are shipping a dashboard-like app template for Kendo UI, which helps you cut time by starting from a readily-available boilerplate for building dashboard interfaces. No need to code dataviz UIs from scratch, but rather start from this available app template and customize it in line with your needs. 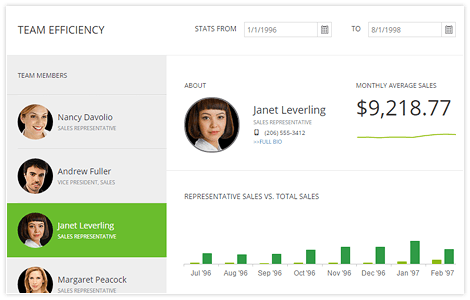 Moreover, the entire set of Kendo UI App Templates available now is also integrated as Visual Studio Project Templates (including Angular template with grid + details). In this way developers using the Microsoft IDE can choose and customize these templates directly using the Visual Studio UI they are familiar with, thus saving development time and increasing productivity. 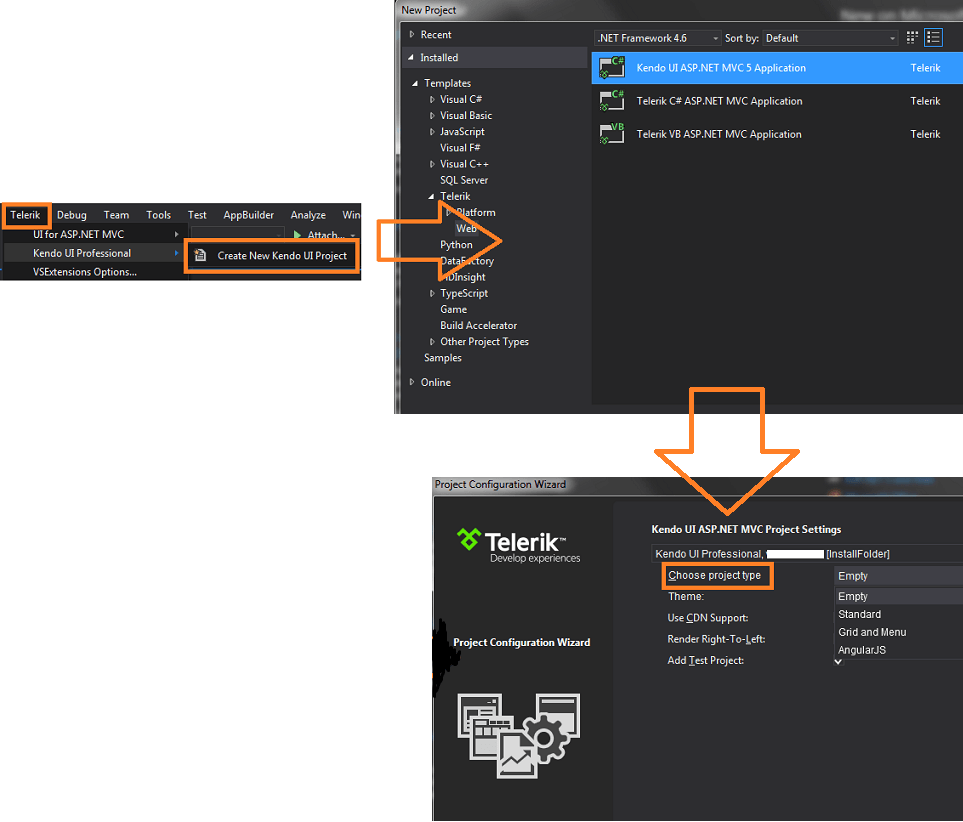 Kendo UI was among the first to support the Alpha of the next major version (v2) of the AngularJS framework. We are already working to support the Angular 2 Beta, announced by Google in the second half of December 2015. This will require some time as we've chosen to approach this in a radically new way, thus ensuring Kendo UI delivers Angular 2 support inherently, and make the Kendo UI widgets true Angular 2 components. Stay tuned for updates on our progress in the coming months, and in the meantime check this page and this blog post for more info.

On the other hand, we implemented our popular Northwind Dashboard sample app in Angular 1.x, which is the current officially supported Angular framework version. You can see the app here. 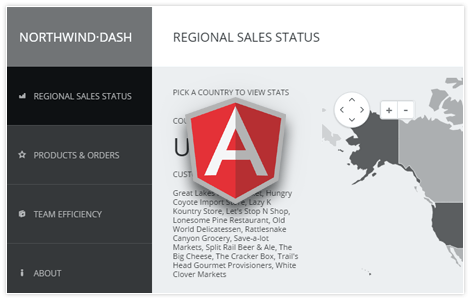 With Q1 we are shipping Excel-like filtering capabilities (with search and checkboxes) as part of the grid column menu. These filtering options are quite intuitive to people who are familiar with MS Excel UI and would like to utilize their skills using web grids. 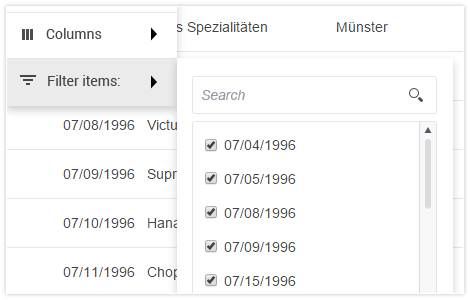 Additionally, the grid filtering capabilities are enhanced with options to filter by Null/NotNull or IsEmpty/IsNotEmpty values, thus making the filtering patterns you can apply even more flexible.

Moreover, the top requested and long anticipated feature to be able to disable dates in calendar/date pickers is now in place, thus making workaround implementations redundant and saving coding. 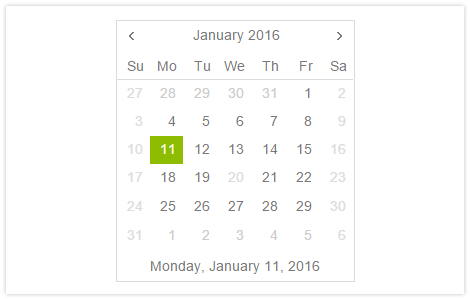 Staying true to our continuous commitment to improve the Kendo UI documentation, we allocated some time for extending the content and beautifying our online documentation in terms of UX and navigation. This process will advance in incremental steps, and you can already find the results of the first wave of our improvements right here.

To date we are the first major component vendor to support the latest RC1 version of ASP.NET vNext with our Telerik UI for ASP.NET MVC product, going beyond Windows and enabling cross-platform web development on Mac and Linux. Check out this blog and this page for details. 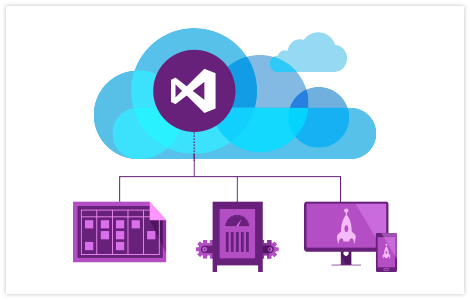 Looking forward, we'll work in parallel with MS and plan to announce official support for the RTM version of .NET 5 shortly after it comes out in the first quarter of 2016. We’ll also introduce a set of Tag Helpers, which are the recommended semantic way to define simple UI elements in MVC6.

The Spreadsheet MVC server wrapper now supports import/export of filters utilizing the Telerik Document Processing Library. In this way you can save or load filters previously applied on the spreadsheet data by your end users.

This is by no means a complete listing of everything new available in Kendo UI's Q1 release. For detailed record about what's shipped in Q1, please refer to the official release log.

I would also like to draw your attention to the fact that Microsoft stopped support for IE browsers prior to IE11 as of January 12th 2016 (see announcement), while still supporting the Enterprise Mode of IE11 going forward indefinitely.

Note that we'll continue to support earlier versions of IE (IE8+) to give you time to migrate to IE11 or Microsoft Edge, and will conform the MS policy to support IE11 (including Enterprise Mode) and MS Edge in the future. If you have any comments or other point of view to share on this issue, please voice it in the comments below.

Two Kendo UI Webinars presenting the product and what's new in Q1 (for existing and new users) will be held in February and March, respectively. Watch for the official announcement with the exact date and registration information in the coming weeks.

Ready to dive in and get your hands dirty? Follow the links to the demos, documentation and release notes for Kendo UI | UI for ASP.NET MVC | UI for JSP | UI for PHP.
Trial Downloads > Kendo UI | MVC | JSP | PHP.

As a client-driven company, our main objective is to deliver products and tools that optimize the time for building apps and solutions from start to finish. We listen carefully to your feedback to identify areas in which we can improve and enhance our current offerings. I’ll be glad to hear your input and thoughts about this release in the comments section below, and feel free to post your suggestions for new functionality directly to our official feedback portal.