Kendo UI and The Road to Angular 2.0

Telerik® Kendo UI® has long supported Angular—it's been an awesome combination. We're seeing a lot of momentum behind Angular 2, so we thought we'd share some background and data around why we're excited to embrace it.

An important role that the Developer Relations teams plays at Telerik is to provide feedback to the product management and engineering leads on the direction of a product. Our job is to stay plugged into the community, and help provide insight on which platforms and frameworks are rising, and which are falling. As a creator of developer UI components and tools, we normally don't create ecosystems. We support much larger ones such as ASP.NET, Java, iOS, Android, hybrid, etc.

We need to make sure that we're building for the platforms and frameworks that developers use today and in the future. It can be tempting to simply let the cacophony of social media set our assumptions about what systems are being utilized versus which ones just have the best logo.

There is no product where this is more challenging than with Kendo UI.

Telerik has been building UI components for the web for over a decade. Kendo UI is the manifestation of many years of hard work and tough lessons. Building UI components is incredibly difficult, and we depend on the hard knocks we've taken in a decade of doing this to help us build the next generation of components.

Kendo UI provides a full set of application features for web developers. Routing, views, models, data sources, UI components. It's all in there. However, most developers don't use Kendo UI that way. Most developers are only using the UI portion. This means that Kendo UI must be able to integrate with the frameworks that JavaScript developers are using. We can't just barge in and say, "If you want to use our grid, you need to rip apart your application and build it from the ground up on Kendo UI." That's very much the same as telling someone who is shopping for a door that they need to buy an entirely new house.

As such, we are always trying to predict which frameworks will be popular next. This is laughably hard. It's also dangerous, because the world of JavaScript frameworks is a cold and cruel place.

JavaScript developers have the distinct pleasure/pain of having to learn an entirely new application framework virtually every year. Not only that, but we as a community tend to viciously bash frameworks we once considered gold standards. Today's darling is tomorrow's pariah, and nobody wants to make a bad decision and then have to be reminded of that mistake for years to come.

So, what's a product team to do? How does the Kendo UI team determine which framework to support? Well, at the heart of any good product lies numerous feedback and support channels for customers. This feedback (along with other data points) helps to drive the direction of the product. Kendo UI is no exception. We use feedback from our customers to help determine our direction as well.

Recently, the Angular team shipped its v2.0 beta and everyone is feeling pretty excited about its upcoming release. What does this mean for a product like Kendo UI? Well, in the spirit of transparency, I'd like to share some of the data we've observed relating to our integration of Angular with Kendo UI. We've never shared this kind of information before. But, we thought it might provide some insight into the expectations of our customers for Angular today and in the near future.

The Long Road to Angular 2.0

Our story begins back in 2011 during the early days of Kendo UI.

We first introduced Kendo UI to the world back in August 2011. At that time, we positioned it as a HTML5, jQuery-based framework for building modern HTML apps. It provided a number of controls out-of-the-box as well as things like templates, data binding, localization, and more. It was a tremendously exciting time for us.

Shortly after the launch of Kendo UI, in November 2011, we began to have discussions both internally and with customers about how to integrate Kendo UI with other libraries in the JavaScript ecosystem. At that time, the Angular team had just shipped v0.10.5 and were building up to a v1.0 launch in 2012. On the Kendo UI team, we wanted to provide integration with Backbone.js because we saw it as the library that everybody was using. So, in early 2012, we went about creating demos and documentation that showcased how to integrate Kendo UI with Backbone.

After launching this content on our website, we got a lot of feedback through our User Voice, forums, and support system. Nearly all of it focused on our integration with Backbone. Then, around mid-2012, we started getting a lot of feedback about support for Knockout. Angular v1.0.0 had just shipped and so there wasn't much feedback from customers for its integration into Kendo UI. For the rest of the year, Knockout was the hottest ticket in town.

Then, in January 2013, Angular started to show up on our radar. By this time, the Angular team had shipped v1.2.* and we started to receive lot of requests from customers to support it in Kendo UI. By mid-2013, it was evident that we needed to support it and so we set off to build a set of directives for Angular. In June 2013, we announced Angular Kendo UI and we've supported Angular ever since. 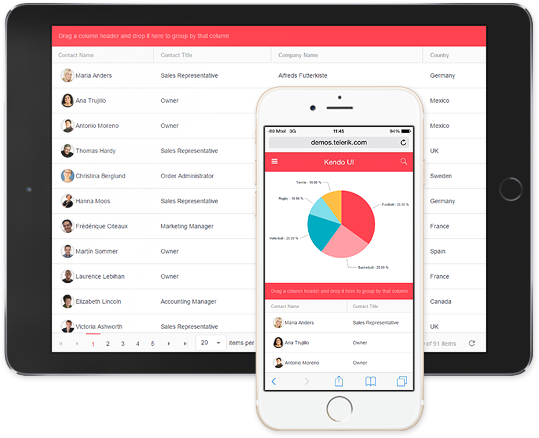 Supporting frameworks like Angular has always been our goal with Kendo UI. It's what compelled us to build in this integration over two and a half years ago. Since that time, we've seen countless customers utilise Angular with Kendo UI through our client-side libraries, mobile framework, and ASP.NET MVC server wrappers.

Earlier this year, we were excited to see momentum build around Angular 2.0. We recently added preliminary support for Angular 2.0 in the Q3 2015 release of Kendo UI. Last month, we conducted an extensive survey of Kendo UI customers. Our goal was to collect information about how our customers are using Kendo UI and what future requirements they have. From all the responses we received from our customers, Angular 2.0 support was the top requested feature for our future roadmap.

Internally, we've started to see increased interest through the customer feedback we receive about Angular. Over the past 180 days, we've responded to nearly a thousand messages from Kendo UI customers relating to Angular. Approximately 70% of those messages have occurred in the last 90 days. These messages typically address some of the technical challenges our customers face when integrating Angular with Kendo UI. However, more recently, we're starting to get a lot of questions about Angular 2.0 support. Clearly, our customers are starting to prepare for its release.

We're observing similar trends during our Kendo UI webinars as well. Recently, during the Kendo UI Q3 2015 webinar, we received well over 500 questions. A significant number—north of 50%—of these questions related to Angular 2.0 support in Kendo UI. Customers are keen to know about our roadmap for Angular 2.0 as we head into the new year.

Regardless of your JavaScript "affiliation," there is no denying that Angular was a force of immense strength in 2014 and 2015. All indications show that 2016 should be equally impressive with Angular 2.0. Going forward, we plan to pivot with Kendo UI to ensure that we provide not only support but the right support for Angular 2.0. That means having integration that feels natural to Kendo UI and not just a jolt-on afterthought. Here's to 2016 and beyond!