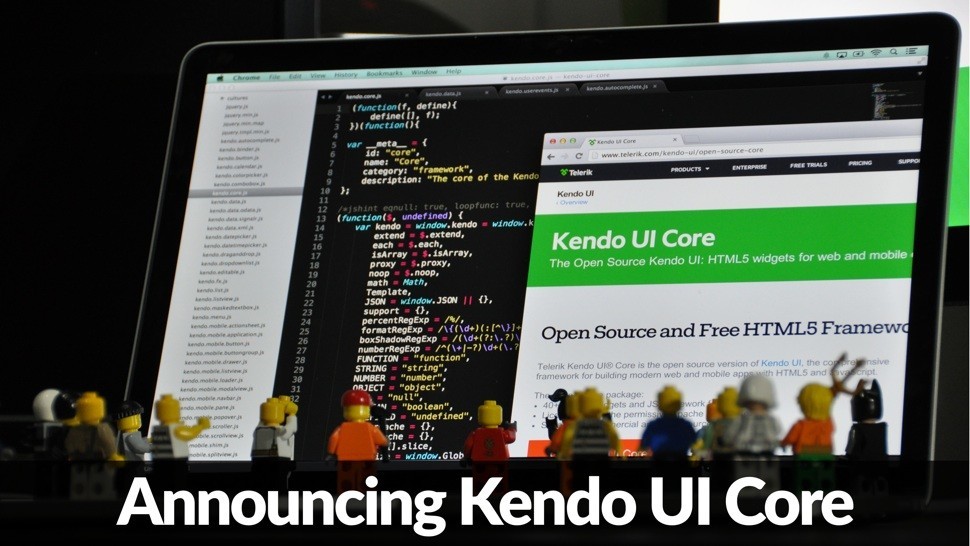 On behalf of the Kendo UI team, I am tremendously excited to announce Kendo UI Core, a free and open-source distribution of Kendo UI (released under the Apache License, version 2.0). We have published the kendo-ui-core repository to GitHub and are accepting contributions from the community. A pre-built version is also available for download. Finally, our commercial version of Kendo UI, Kendo UI Complete has been renamed to Kendo UI Professional.

A Brief History of Kendo UI

986 days ago, we announced Kendo UI to the world. Our team's original goal was to solve the core problem of "framework assembly" that frequently plagued jQuery-based development at the time. Since then, the product's focus and features have expanded to include Kendo UI Mobile, MVVM support, AngularJS bindings, adaptive widgets, and much more. We've incorporated Kendo UI into products and frameworks like the Telerik Platform, Telerik Analytics, Sitefinity, TeamPulse, Test Studio, Google Chrome, Visual Studio, NuGet, Sublime Text, ASP.NET, JSP, PHP, and many others. We've built countless demos, tackled assumptions about HTML5, written whitepapers, and iterated like crazy throughout this entire journey. Looking back, it's humbling when you review just how much has happened:

It's amazing how far we've come in such a short time. Today's announcement of Kendo UI Core starts a new chapter in our product's history.

Kendo UI Core includes 24 of the UI widgets currently in Kendo UI Web (AutoComplete, DatePicker, Tooltip, etc.), all of the widgets and features formerly available under Kendo UI Mobile, and all of the core framework features of Kendo UI (DataSource, SPA, MVVM, etc). 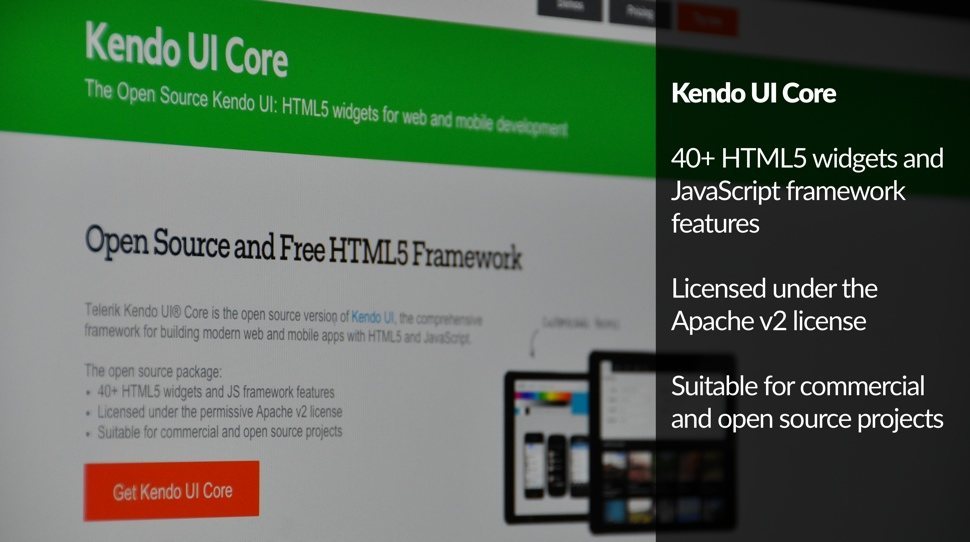 With the release of Kendo UI Core, we're peeling back the curtain and allowing our developer community to see how our library is built. Not only do you have access to most of the UI widgets and all of the framework features that make up Kendo UI today, but you can gain insight into the practices our team uses to build Kendo UI. This includes access to 1,000+ tests that we run across browsers for every single commit to the repository.

"So, does this mean you're abandoning Kendo UI?"

No, not at all. The UI widgets and framework features that make up Kendo UI Core are still essential to our overall plans for Kendo UI. Not only do we intend to continue shipping Kendo UI Core as a part of all of our other packages, we'll continue to actively develop Kendo UI Core through fixes, features and new widgets for as long as we work on Kendo UI itself. It's part of our commitment to ensure that developers will find building apps with Kendo UI easier and more friction-free than ever before.

Now, not all Kendo UI widgets are created equal. Some widgets - like the Grid, Scheduler, and Editor - are so feature-rich that they're more solutions than widgets. As such, they consume a great deal of engineering effort to build and maintain. To ensure that critical widgets like these continue to get the proper attention and focus they deserve from our engineering team, we’ve decided to offer these only with Kendo UI Professional (formerly Kendo UI Complete). For your convenience, we've published table that compares Kendo UI Core to Kendo UI Professional.

A Word about Apache License, Version 2.0

From the beginning, we've published a version of Kendo UI Web via a GPLv3 license. Many of our developers were glad to have this option for using Kendo UI, but because the GPL is an restrictive license (i.e. can only be used for non-commercial projects), its value to the overall developer community has been limited. The GPL license also prevented us from being able to accept community contributions for Kendo UI Web from interested customers.

With Kendo UI Core, we're chosen to adopt a more liberal BSD-style license; Apache License, version 2.0 and retire the GPL version of Kendo UI Web. This allows offer developers with a license that's compatible with a broader variety of project types, while ensuring that they always have access to the latest and greatest from the Kendo UI team and the developer community.

You'll find the source code for Kendo UI Core in the kendo-ui-core repository on GitHub. We chose GitHub because we've big-time fans of its awesome support and service. They facilitate open source projects very well and we can't recommend GitHub more highly.

Getting up-and-running with Kendo UI Core is pretty simple. Basically, there are two ways to get the source code for Kendo UI Core. You can either download a pre-built distribution or you can build the source yourself using Grunt. We've provided detailed build instructions in the README of the kendo-ui-core repository. The steps are pretty simple:

Alternatively, you can build only the parts you need using the Grunt custom task. This will create a custom minified file (dist/kendo.custom.min.js) which includes only the specified components. For example, the following command will build a custom bundle containing only the AutoComplete and DropDownList widgets:

If you're a fan of Bower, you can install the kendo-ui package as follows:

This command (above) installs Kendo UI Core into a kendo subfolder in the components directory of your project. Each widget file can be used independently or collectively in a minified distribution that contains all of the widgets for Kendo UI Core.

Kendo UI Core represents our goal of giving back to the front-end development community. It has been released under the permissive Apache 2.0 license, which allows developers to use the library in both commercial and non-commercial projects. What's more, we're accepting contributions to Kendo UI Core from our extensive developer community. We'd love to have you to be a part of that community. There are many ways to contribute to Kendo UI Core:

If you're looking to get involved, please read Contributing to Kendo UI Core to learn more.

Getting Support for Kendo UI Core

As an open source project, Kendo UI Core is a primarily community-supported project. As such, we encourage you to use Stack Overflow to post questions and to utilise the issues list for the kendo-ui-core repository to report bugs. More formal support options are also available via Kendo UI Professional, and our support plans.

If you're wanting to learn more about today's announcement then you're in luck! We'll be hosting a webinar on May 7, 2014 that will cover everything (and more) in this blog post. 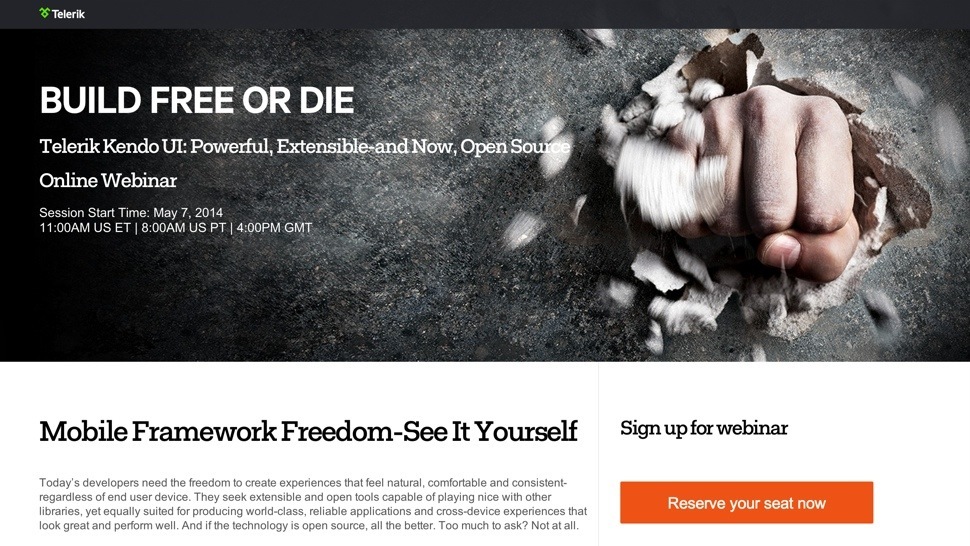 Register now for our BUILD FREE OR DIE webinar today!

With today's announcement of Kendo UI Core, we've accomplished a major milestone in the ongoing development of Kendo UI. Our goal is to increase feedback into the product to make it even better. We are really excited about the opportunities this announcement brings to the open source community and we can't wait to see the great things you'll build with it.