The Service Pack updates for the 2018 R3 release of Telerik Reporting and Telerik Report Server are live. They deliver the shiny new Crystal theme to the WPF report viewer, important design-time improvements and more.

After the Crystal theme was recently released by our friends on the Telerik UI for WPF team, we are catching up by introducing it in the Telerik Reporting product as well. As with the other UI themes, it is easy to apply it and modify it as desired. To be clear, we're currently introducing the light flavor of the Crystal them - the dark one is yet to come, as it only debuted this week with the SP release of the WPF suite. 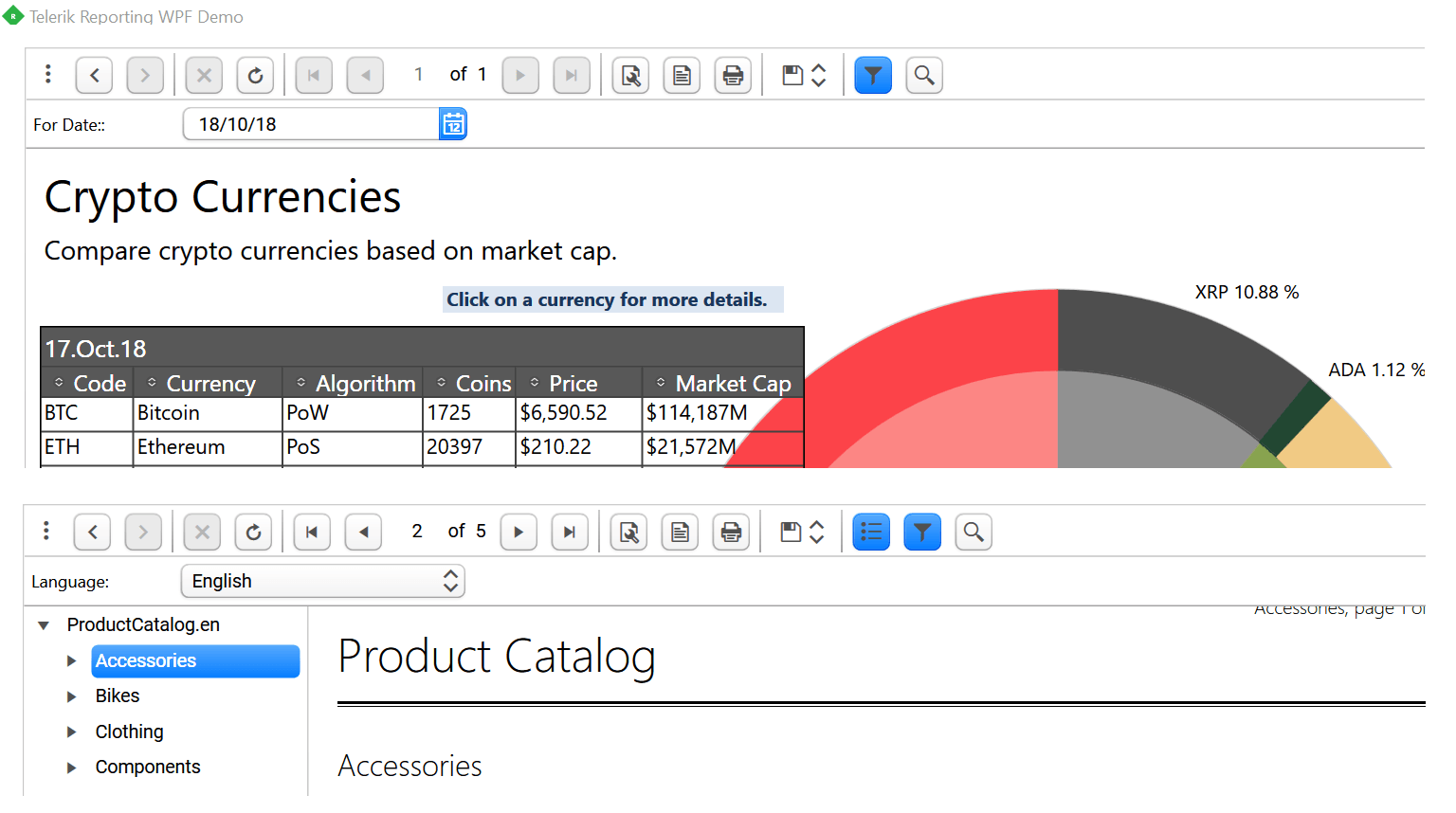 Report Designer, either standalone or integrated into Visual Studio, is the tool you use most of the time while shaping your reports. Hi-res monitors are the devices of choice for more and more developers and designers, so we focused on improving the experience with high resolution devices.

The most valuable difference is apparent when using a pixel as a unit of measure for a report item and for the design-time grid and ruler. These pixel units are correctly interpreted as device-independent pixels (DIPs) later, when the reports get generated, just like web browsers treat them, but was incorrectly represented as physical pixels on the designer surface. The effect of the incorrect design behavior can be easily demoed instead of explained with the following screenshots: 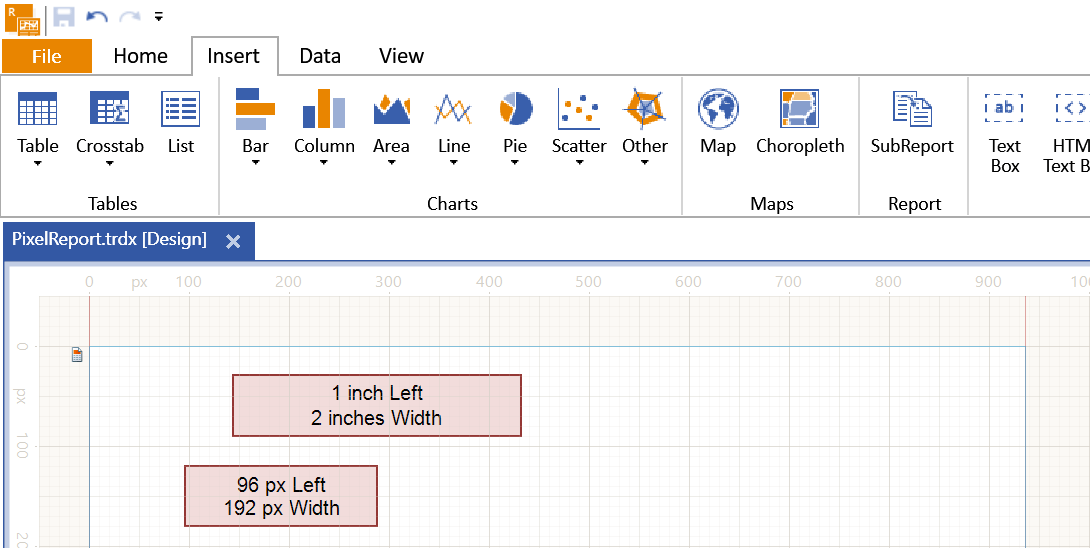 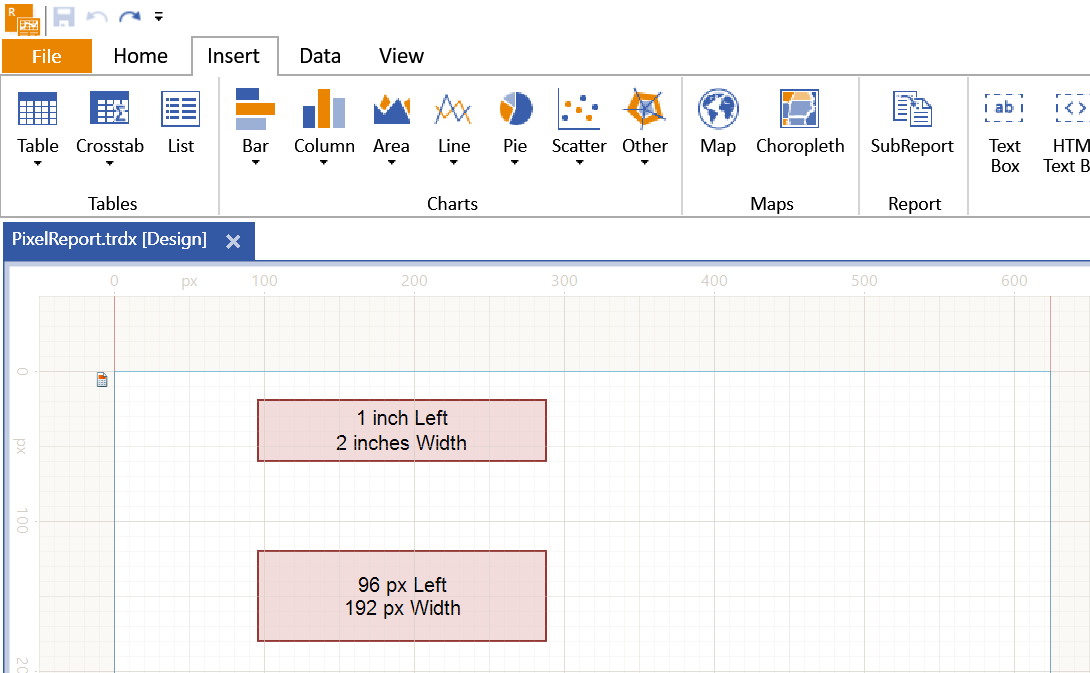 To overcome this, we had to apply significant changes to the Unit structure, and while we were there we also refined the API reference so that it is clear which conversion and factory methods work with DIPs vs. physical (or device-dependent) pixels.

Other improvements on hi-res monitors arose from this change. The Table row and column handles got appropriate sizing, as did the Graph inner handles. Item overlapping detection got more precise because of the report generation precision, which is 0.01 mm. While on the Unit improvements, we changed its serialization, so that it does not emit too many digits after the decimal point. These excessive digits were not meaningful anyway, having in mind the runtime precision mentioned above.

Another designer improvement is a more suitable user warning and experience when searching for report types in the Visual Studio Report Designer and in the new report viewers item template wizards, so that users don’t get confused: 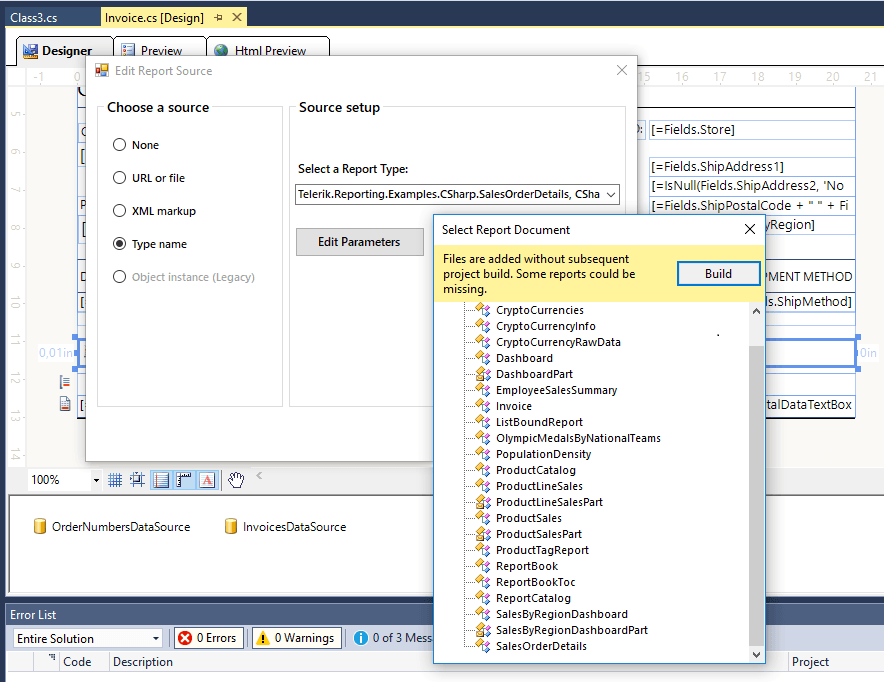 We applied an important fix in the Angular report viewer dependencies. Because of the functionality introduced in R3 2018 of direct email for the end-user, we had to depend on the whole Kendo UI suite, which led to a big download footprint when utilizing the Angular viewer. Now, (thanks Kendo UI team!), the viewer has a significantly smaller subset of Kendo UI code as a dependency it carries.

Revamped Scheduled Documents and Data Alerts were introduced in R3 2018 along with a new version of the REST APIs for managing the Report Server assets programmatically. The SP release further evolves the APIs, introducing endpoints for managing the report documents that the Scheduled Tasks & Data Alerts generate, so that, for example, you can delete older unnecessary ones.

Multiple issues got addressed as well. For the full list of all these, please visit the respective release notes for Telerik Reporting and Telerik Report Server.

We want to know what you think—you can download a free trial of Telerik Reporting or Telerik Report Server today and share your thoughts in our Feedback Portal, or right in the comments below.

You can get Reporting and Report Server with Telerik DevCraft. Make sure you’ve downloaded a trial or learn more about DevCraft bundles. DevCraft gives you access to all our toolsets, allowing you to say “no” to ugly apps for the desktop, web or mobile. 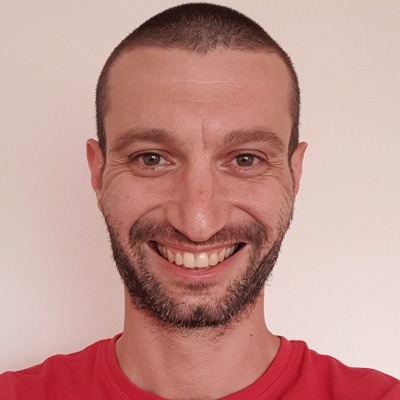 Milen Elkin is a Team Lead & Product Manager of the Telerik Reporting solutions. It’s been a while since he joined the company back in 2007. He likes the green color and when possible enjoys it in countless shapes and shades up in the Bulgarian mountains.