A Day At The SPA With kendo.Router

I've spent a few days lounging around in the SPA so far, and I'm beginning to grow acustomed to the luxuries of this life. From the HTML massage of kendo.View to the DOM replacement therapy of kendo.Layout, the SPA life has proven to be quite relaxing.

But this life can be difficult. It can lead to some #FirstWorldProblems, too. What if I want to get started with my treatments and therapy, but I have to stop in the middle and come back later? I don't want to re-start the procedure that I've already started. I would rather return to the same therapist and pick up where I left off. 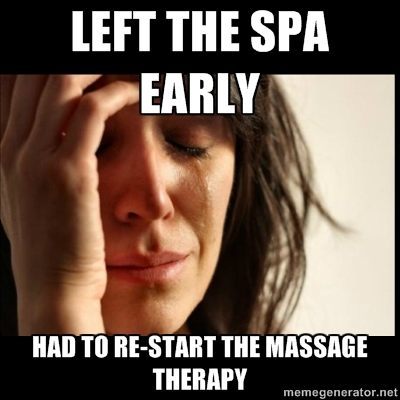 Enter the kendo.Router - your personal placeholder for application state. A router allows you to create URLs that are bookmarkable, directly linkable, and shareable on social media sites. A router is like a personal assistant at the SPA - a person that will keep track of what you've already done that day, so that you can pick up where you left off. When a routable URL is clicked, the router kicks in and tells the application to put itself back in to the state that was encoded in to the route.

You may resume my therapy, now

Getting started with a router is simple. After creating an instance of kendo.Router, call the route method to set up a route definition and handler. Lastly, the router's start() method needs to be called. This tells the router to start monitoring the URL for changes, so that it can work it's magic and fire the route handler methods as needed.

Run this code and point your browser to your page, attaching "#/myPage" the end of the URL. This hash fragment is picked up by the router and matched against the first route. The route handler is triggered, and "the /myPage route was triggered!" is logged to the browser console.

A route doesn't have to just be a hard coded string. It can also contain parameters, like a back-end server router (Ruby on Rails, ASP.NET MVC, Django, etc). To do this, name a route segment with a ":" before the variable name you want.

When you run this route, you can specify a URL hash fragment of /foo/anything you want here. All of the URL after the /foo/ will be provided to the router callback function as the id parameter of the function. If you run this on a page and point your browser to #/foo/1, for example, the message "the /foo/1 route was fired!" will show up in the browser's console window.

You can add as many variables as you want, to a route:

There are still more options and capabilites for routes. Be sure to read the documentation and the getting started guide for routers.

Setting the browsers hash fragment is done when the user of the app has reached a point in the app that should be bookmarkable or directly linkable. For example, in the Kitteh Gallereh app that we've been building for this series, viewing an image is an application state that should be bookmarkable. That means when a user clicks on a kitty image, we show it and we update the browser's URL hash with a "route" to the kitty.

If you tell the router to navigate to a route like "/images/2" it will look like this:

Note that the route really truely is a hash fragment in the URL. It's as if you had put an <a href="#images/2">kitteh</a> link in the page and the user clicked it.

Using the hash fragment like this has become standard practice for SPA routers. It allows a browser to have it's URL updated with information that is specific to the current browser sesstion, without having to make a round trip to the server.

Clicking a link that has a hash in it's "href" doesn't do a server request, after all. It only jumps to the named anchor on the current page. In the case of a router, there isn't an an explicitly named anchor in the page, though. The router is monitoring the URL for changes. When it seems the hash fragment has changed, it checks that fragment against the registered routes and runs your JavaScript code accordingly.

Hash fragments are never sent to the server, either. If you click a link like this: <a href="http://localhost:3000#/image/2">kitteh</a> your browser will only request "http://localhost:3000" from the server. It will not send the hash fragment to the server. The best part, though, is that named anchors and hash fragments also update your browser history. You can use the forward and backward buttons in your browser to move to a previous hash fragment, or back to the current one. This has been the standard way of handling URLs in browsers for many, many years now. SPA routers are only taking advantage of hash fragments and using JavaScript events and string parsing to turn an ancient technology (by web standards) in to something very useful in the new world of SPAs.

I KNOW! I haven't shown you any kittehs today! I'm sorry! Here, let me fix that: 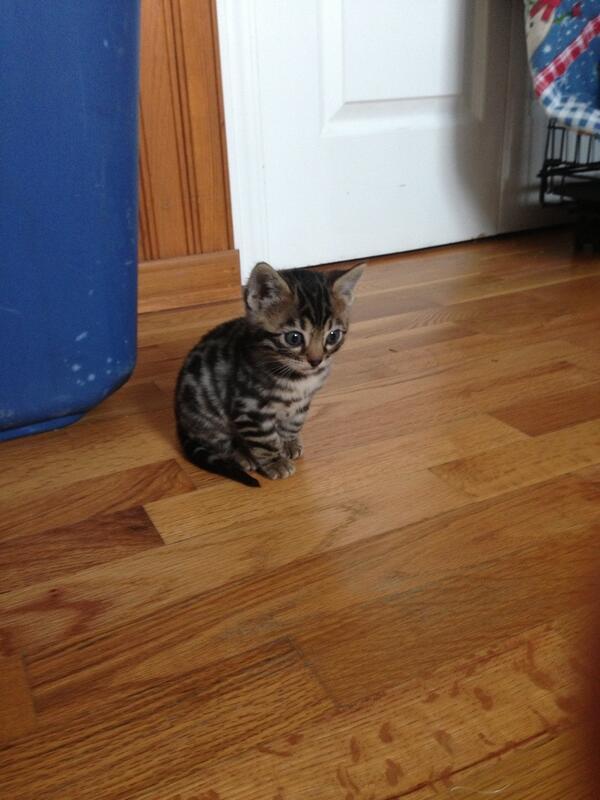 Ok, that's better. Now, where was I? Oh, right... clicking an image and updating a browser's route.

This requires a route handler to be available, to handle this route definition.

Now when you click an image, you'll see the URL update to show the hash route of the image you clicked. 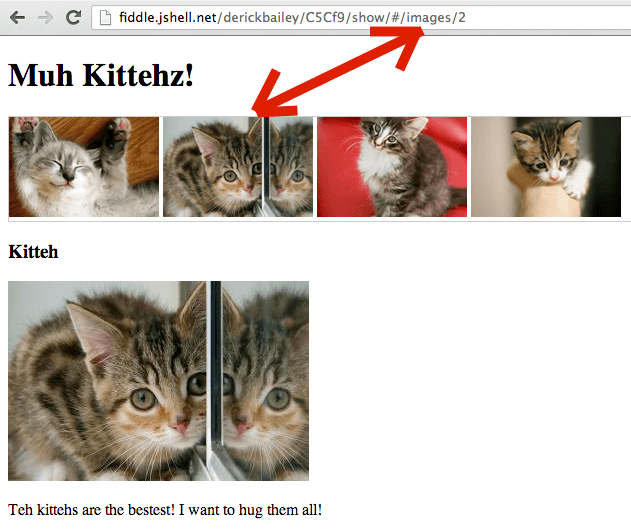 For a complete listing of the code to make the image load and display, see this JSFiddle. It's hard to make this work in an iframe embedded in to a blog post, though, because you won't see the URL updating. So instead of trying to do that, go see the Kitteh Gallereh in action.

At this link, you'll be able to see the page's url updating when you click an image. Then when you refresh the page, the same kitty image will show up, because the router read the id from the URL's hash fragment.

Setting Up Your Usual SPA Treatment

I've shown you how to get a very basic router up and running, and how to integrate it in to the Kitteh Gallereh application that we've been building in this series. But we also have to think about what to do when no route is requested vs when a route is requested. We don't want to duplicate work, and we don't want to show a blank screen. To handle this, a default route should be provided. This is done by specifying a "/" as the route and providing a callback function for it.

Once again, see this same JSFiddle and the working version of the fiddle to see this code in action.

Treat yourself to a day at the SPA!

Interested in seeing what Kendo UI can do for you and your project? Want to try out the latest and greatest in the Single Page Application structures that Kendo UI provides? Head over to the download page, and start working with Kendo UI today!

JavaScript, Kendo UI
About the Author

About the Author
Derick Bailey is a Developer Advocate for Kendo UI, a developer, speaker, trainer, screen-caster and much more. He's been slinging code since the late 80’s and doing it professionally since the mid 90's. These days, Derick spends his time primarily writing javascript with back-end languages of all types, including Ruby, NET and more. Derick blogs atDerickBailey.LosTechies.com produces screencasts atWatchMeCode.net, tweets as @derickbailey and provides support and assistance for JavaScript,  and much more around the web.