Unlike object-oriented languages that use a class-based inheritance mechanism, JavaScript’s inheritance system is prototypal. This post will show you how to achieve inheritance in JavaScript through the concept of objects being able to inherit properties from other objects.

Prototypes have a significant impact on how objects behave in JavaScript. This article will assist you in effectively grasping how prototypal inheritance works in JavaScript. Let’s get started!

Most object-oriented languages like Java or PHP use a class-based inheritance mechanism. There is no concept of classes acting as a blueprint for creating objects in JavaScript.

What Does Inheritance Mean in JavaScript?

This form of inheritance via the prototype chain is commonly referred to as delegation in JavaScript.

All functions in JavaScript are ordinary objects, which means they can have properties. They implement the [[Call]] method, but when invoked with the new operator, they become constructors (factories for making objects).

JavaScript has several built-in objects (object, function, array, string, etc.), and every function in JavaScript is an instance of the built-in function object.

Functions in JavaScript that can be used as constructors, whether built-in or user-defined, by default have a “prototype” property. This prototype property is only available on functions, not on objects.

Learn more about functions, promises, iterables and observables and how to distinguish between them. 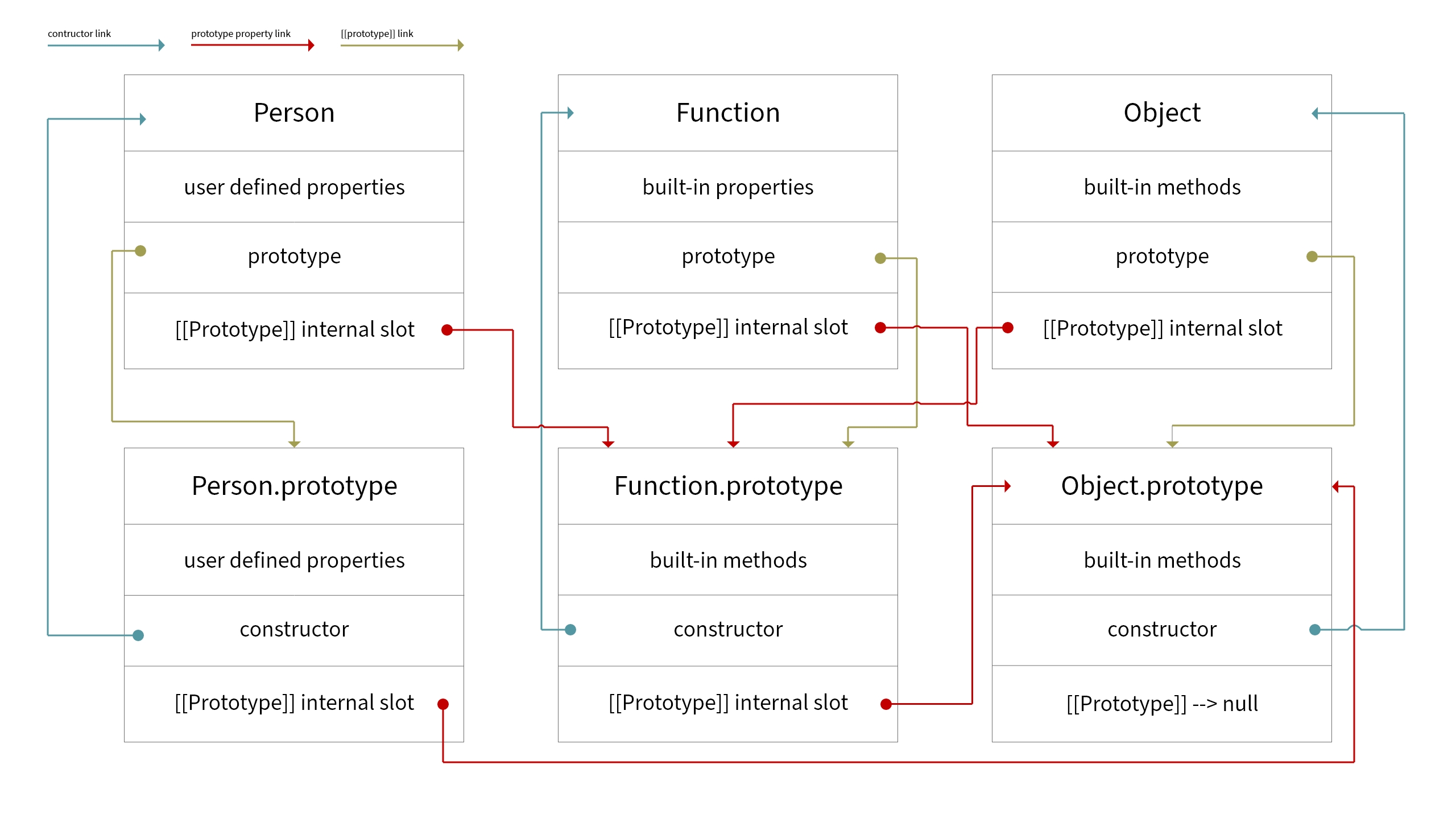 Some objects don’t directly link to Object.prototype as their prototype; instead, they have another object with a different set of default properties.

[[Prototype]] vs. .prototype vs. Prototype Object

All objects in JavaScript have an internal slot called [[Prototype]], which is a reference or link to another object. The value pointed at by the prototype internal slot of an object is generally referred to as “the prototype of that object.”

There is a difference between an object’s own [[Prototype]], a prototype property on a constructor function, and a prototype object. This is a very confusing naming choice, but I’ll break it down with the example below.

The proto property is an accessor property on Object.prototype with a getter (that exposes the value of an object’s internal [[Prototype]]) and setter (allows an object’s [[Prototype]] to be changed) function. Although it is implemented in most modern browsers, the proto property has been deprecated and is not standard for accessing the prototype chain. Current standards provide an equivalent Object.getPrototypeOf() method used to follow the prototype chain or retrieve the [[Prototype]] of an object since ECMAScript 2015.

In the snippet above, we created a simple object with the literal syntax. What if we want to create more objects with different names, jobs, etc.? There are many ways to achieve this in JavaScript, but we’ll be using a constructor function.

We can create as many instances as we want from the Person constructor by prepending new to the call.

For example, let’s say we have some methods we want our instances to inherit or have access to. We have to add the methods to the Person prototype property. A constructor’s prototype property is where we define methods and properties that we want to share across all instances.

Since we want the getName method to be the same for every instance, we are saving memory by keeping it in the prototype property of our constructor function, thereby creating a delegation relationship here for every instance created by Person to the Person.prototype object. This way, it only has to be in memory once, rather than for each instance. This would save you from having to duplicate code, be better for performance and require less memory.

Every instance of Person will have access to this getName method. Subsequently, properties or methods added to the Person prototype property can be accessed by all objects sharing the prototype.

When we try to access methods or properties on an object, JavaScript’s default built-in [[GetPrototypeOf]] internal method performs the following:

According to the JavaScript Specification, an object’s prototype chain should have finite length (that is, starting from any object, recursively applying the [[GetPrototypeOf]] internal method to its result should eventually lead to the value null).

This is how the prototype chain works, and it is what makes inheritance possible. It should also be noted that if you have an object that defines a method or a property of the same name as its parent, the [[GetPrototypeOf]] method will return the object’s property.

The class was added in the ES6 specification that was released in 2015. It is considered a syntactic sugar layered on the current prototype-based inheritance. Apart from simple syntactic changes, a few things work differently in how they behave, but we won’t cover those differences in this post.

What happens when you use the class syntax isn’t different from defining a constructor function that follows the prototype-based inheritance system, but using class makes your code much easier to read.

Going Beyond ESLint: An Overview of Static Analysis in JavaScript