At the beginning of each quarter, we here at Kendo UI release a roadmap outlining what we plan to do over the next quarter. We have had a public roadmap ever since the first release of Kendo UI; not only for our open source versions of Kendo UI, but for our commercial features as well. Now that the Q1 release is out, its time to look ahead at what's coming next.

Before we go through some of the bigger items in the Q2 roadmap, lets talk about how we decide what features actually make it into said roadmap.

What's In A Roadmap

We have a top secret analytics engine written in VB4 and running on Windows 95 that makes Wolfram Alpha look like a Speak & Spell. It scours the internet, as well as public phone listings, DNA samples, criminal records and current real estate trends to decide exactly what our customers need from the next version of Kendo UI.....

Actually, its much simpler than that and is mostly based on YOUR feedback. Aside from our UserVoice portal, we also gather data from:

It takes a lot of work and a lot of people to correlate all this data, but its the only way to build a roadmap that delivers the right features at the right time. Needless to say, the work is never done.

Now that you know about our "not so glamorous" roadmap planning process, let's get right into some of the highlights for the Kendo UI Roadmap for Q2 2014.

Enterprise Grade UI for Every Desktop and Device

HTML5 and the web platform are trendy, and usually we think of them in the context of slick public facing apps for consumers. The reality is that the modern web and mobile devices have had a tremendous impact on the enterprise.

Enterprises are often faced with incredibly complex tasks that power very complex business models. The requirements placed on the technologies that support these requirements continue to push the limits of what the web is able to do. Consequently, our roadmap theme for this upcoming second quarter is "Enterprise Grade UI for Every Desktop and Device".

The Grid is frequently a staple of enterprise applications. Grid's often contain the lion's share of an application's functionality. Grid's provide a flexible and robust interface for working directly with very complex underlying datasets. One of the highly demaned features that we just released with Q1, was the ability to freeze columns on the grid. We are expanding our Grid offering this quarter to provide an additional Pivot Grid widget.

The PivotGrid will bring this capability right into the browser with the assurances that it will work across all browsers with Kendo UI's focus on speed.

Speaking of the grid, we'll also be adding a "Google-style" AutoComplete to the Grid filtering mechanism. This will allow a selection of current filterable values instead of a free text field.

Kendo UI has a gorgeous data store abstraction called the Kendo UI DataSource. It stores client-side models of your remote data, while providing the UI widgets with change notifications as well as tracking dirty and clean state for models and a whole lot more. As it turns out, sometimes your remote endpoint is not available. This is especially true on mobile. What happens then?

We aren't convinced that an app should just stop working because it isn't connected. That's why we are adding offline support to the Kendo UI DataSource. This feature will allow the DataSource to save data locally while offline, and then synchronize changes when you get back online. Our goal is to make offline support for you as the developer much easier by handling the DataSource and synchronization for you.

Since the Kendo UI DataSource is part of Kendo UI Core, this feature will land there as well.

The Toolbar/ActionBar Widget will allow for creating toolbars in your applications similar to the toolbar that is in the Kendo UI Editor Widget. Additionally, we will provide a special mobile ActionBar that mimics the behavior of the ActionBar currently available on Android apps so that you can take advantage of this UI construct in your hybrid mobile applications.

This widget will also be part of Kendo UI Core and available with the open source package.

We released the new Kendo UI Diagram control as a new widget for the DataViz set this past quarter. The Diagram is a very complex widget, so we decided to give it a beta tag and let it bake for one more quarter to be sure that it was up to Kendo UI standards. We do this from time-to-time when we have a control that needs a little bit more engineering time than allowed in a quarter.

This next quarter we will be releasing the full Diagram widget with the official Kendo UI Quality Control stamp of approval.

The Mapping controls were a highly requested feature from Q3 of last year that officially graduated from Beta in the Q1 release this year in March. This quarter we will continue to add enhancements to the mapping widgets by adding support for Bubble Map layers, as well as showing you how you can create your own Map Tile Layers.

TreeMapping is a visualization for hierarchical data which uses nested rectangles. Each rectangle's size and color is related to the structure of the data, allowing you to more easily identify trends and patterns. You may have seen a TreeMap before and not realized that's what its official name was. That was definitely the case for me. Here is an example of one showing the 2012 U.S. presidential election results. 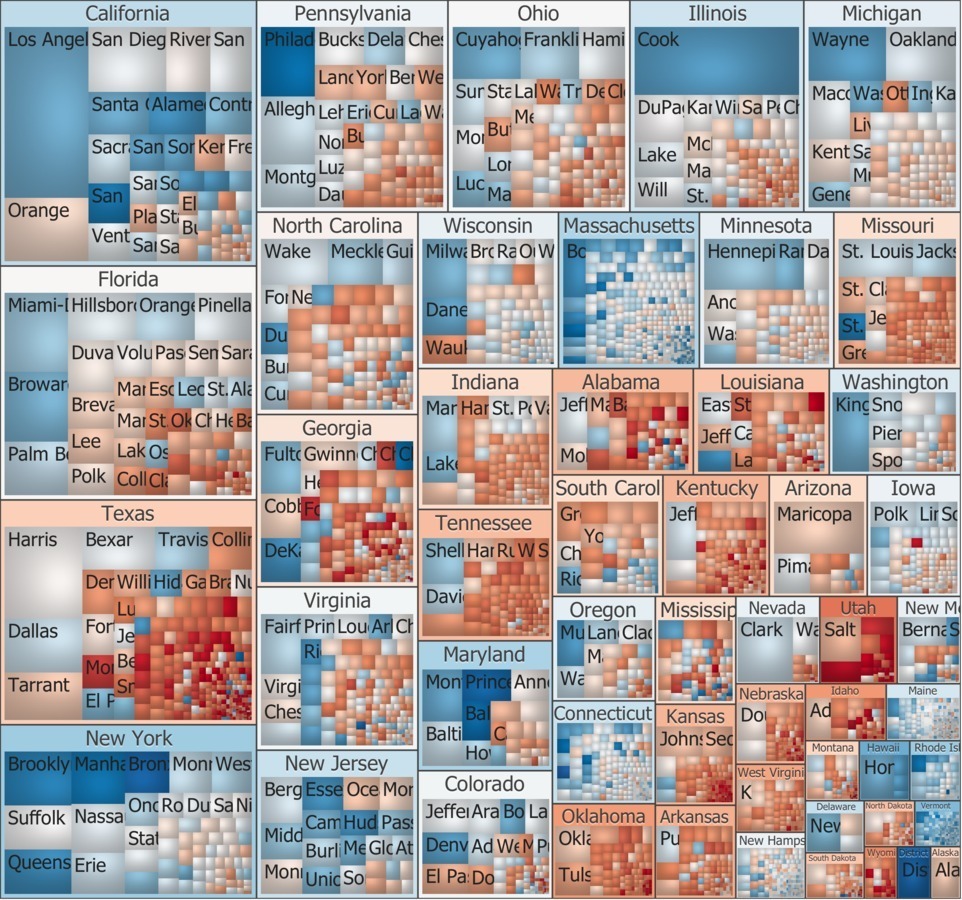 After two years of building Data Visualization widgets as part of Kendo UI, we had to figure out how to draw shapes to SVG, Canvas and even VML for older versions of Internet Explorer. In the process of building this rendering engine, we realized we had essentially developed a drawing API. We decided to make this API official and get it documented so that we could expose it to you. This API will give you direct programmatic access to the same API that the widgets use internally to draw all of the different charts to the various surfaces.

Our internal roadmap contains a great deal more than I have outlined here, and we have a long track record of releasing features that aren't even on the roadmap since they emerge as by-products of other features.

Be sure to check out our official Roadmap page for more information, including several items I didn't get to talk about here.

Lastly, but definitely not least-ly, you will want to attend our Build Free or Die Webinar coming up on May 7th. We're going to talk about the recent Kendo UI Core release AND go through some of the really exciting Q1 release features.

As usual, we've got some CRAZY prizes to give away as well.

I think I'm going to register as my wife so I can finally win one of these awesome prizes. You have no idea how it feels to have to box this stuff up every quarter and send it out! I envy all of you winners out there.

So to wrap up, I've got three tasks for you that should be completed in this exact order for best results...

About the Author
Burke Holland is a web developer living in Nashville, TN. He enjoys working with and meeting developers who are building mobile apps with jQuery / HTML5 and loves to hack on social API's. Burke works for Telerik as a Developer Advocate focusing on Kendo UI. Burke is @burkeholland on Twitter.