Step Into .NET 5 with Telerik UI for ASP.NET Core Components

.NET 5 is here, and Telerik UI for ASP.NET Core is fully compatible. Check out what's new in .NET 5 and how you can take advantage today.

With the recent official release of .NET 5, announced at .NET Conf 2020, a lot has changed in the .NET world. In this blog post, we will recap the main features in the fifth iteration of the Platform. We will also touch on some key drivers behind the new release, the long-term strategy of Microsoft, and how the Telerik UI for ASP.NET Core component suite can help you build powerful web applications with modern UI in half the time, by building on .NET 5. 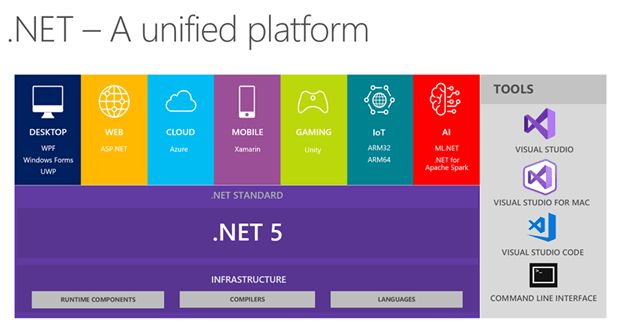 Going forward with .NET there won’t be any notion of “Framework” or “Core,” as these both will merge into one—“.NET 5.” Microsoft’s main goal was to create a system that allows developers to use C#, F#, and the same .NET APIs to create a wide range of different applications through different chip architectures on various operating systems.

They’ve also stated that the platform will be highly flexible, enabling professionals to make easy and swift changes in build configurations to modify the way they build their apps in Visual Studio, Azure DevOps, Visual Studio Code, Visual Studio for Mac, or directly at the command line. The newly released platform is expected to allow simple and fast development.

Everything that made .NET Core a champion will continue to exist:

Here’s what will be new:

.NET 5 contains some amazing performance improvements. For example, JsonSerializer performance is significantly improved in .NET 5.0. Stephen Toub covered this and other runtime and libraries enhancements in his post. There are many exciting improvements in gRPC. 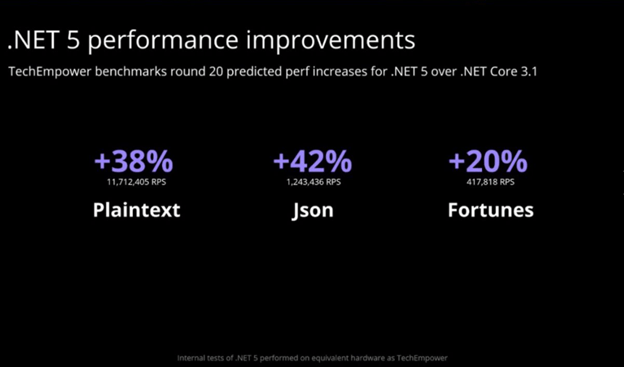 In addition to the high performance and scalability of the framework, your ASP.NET Core applications can further be boosted by the Telerik UI components performance features. An example of that is the virtualization technique used in all heavy-data components such as  Grid, DropDownLists, Scheduler, ListView, etc.

Back in the days, the .NET platform used JIT to translate Intermediate Language (IL) code into an optimized code for machines. Nowadays, Microsoft has managed to build a JIT-based managed runtime that handles high throughput well and transforms the development into a fast and easy experience.

JITs are a great solution for client and long-running cloud scenarios. They can easily produce a code, targeting specific machine configuration, including particular CPU instructions. They can also re-generate methods at runtime to compile code, and at the same time still enabling developers to produce highly-tuned versions of that code.

Working with development tools like dotnet watch tool or edit and continue, is another aspect where JIT comes in handy. They often need compiling and loading multiple times in a single process and JIT allows this without restarting.

The default workload experience in .NET 5 will be the JIT-based CoreCLR runtime. The only exceptions will be iOS and client-side Blazor, as they both require AOT native compilation.

As you already know well, Mono is the original cross-platform .NET implementation which started as an open-source .NET Framework and then transitioned to targeting mobile devices with the increased popularity of iOS and Android devices. Mono is also used as a part of the runtime for Xamarin.

CoreCLR is the runtime that is used as a part of .NET Core, and its main focus is supporting cloud applications. Currently, it’s also used for Windows desktop, IoT, and machine learning applications

Digging deeper into those runtimes, they both have a lot in common, but they also differ in some features and capabilities. With the officially released .NET 5, developers will now be able to choose the runtime experience they prefer. Both CoreCLR and Mono will be drop-in replacements for one another.

ASP.NET Core also developed greatly in its 5.0 version.  Daniel Roth covered all of them in his announcement blog post. Check the highlights below:

A bunch of enhancements shine in the freshly released Entity Framework 5.0. Features like many-to-many relationship and table-per-type inheritance mappings, event counters, and many more. The full coverage and the list of highlights can be found in the announcement blog post.

Microsoft tends to provide long term support for their even releases and below is the table for the past releases. More on the support policy can be found here: https://dotnet.microsoft.com/platform/support/policy/dotnet-core

As for the future, Microsoft's intentions are to ship a major version once a year, every November:

Along the course of the year, we closely followed each of the .NET 5 Previews and RC releases. We strived to ensure compatibility with each and every one of them, in order to ensure that when the Day comes, we can safely announce official support. Just a few days after the .NET 5 announcement at .NET Conf 2020, we are now shipping our R3 2020 SP2. This is our first official release in which we support the fifth major version of the Platform. To be honest, the great developers and the perfect quality of the code that they produced over the years in Telerik UI for ASP.NET Core, made it possible to be fully compatible with just a few changes and small tweaks.

Besides the official support announcement, we managed to produce a great number of fixes and improvements. This effort is a step towards making the suite even more stable and giving you the confidence to build a formidable end-product with our components.

Stability has always been a cornerstone for our products, and we are committed to continue putting in a fair amount of effort on that front. That said, we will continue to strictly follow all releases of the .NET and ensure that you don’t have to think about the compatibility when it comes to the work of the components from the Telerik UI for ASP.NET Core suite. 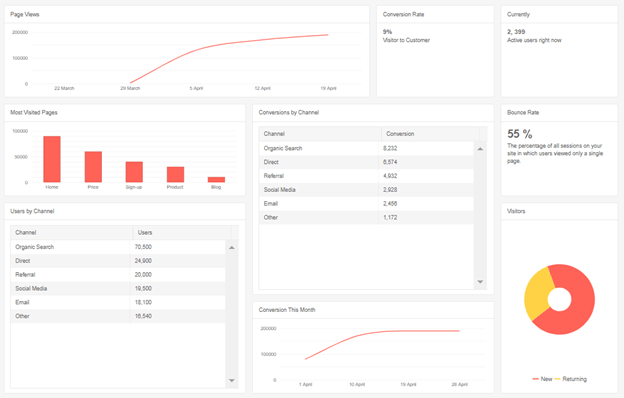 The TileLayout component—along with more than 100 other components—is part of the Telerik UI for ASP.NET Core suite

One of the most attractive and monumental features of for .NET Core and now .NET 5 is cross-platform development. We stepped on that ladder, in order to ensure smooth development with our product across different operating systems and IDEs. Besides the standard .zip and .7zip for Windows and Linux, we produced pkg files, in order to ease the experience for the Mac OS and Visual Studio for Mac users.

We worked closely with Microsoft to prepare the ground for a seamless experience with Visual Studio for Mac. Besides the manual installation of the product, we do rely on NuGet packages for the distributions on all platforms. Check this article for a quick setup guide.

We also thought about Visual Studio Code development, where we gathered around the idea of an effortless getting started experience with our Telerik UI for Core suite. We decided to transmit the idea of our current Visual Studio extensions into the VSCode extensions. While we already did that for Telerik UI for Blazor, the Telerik UI for Core extensions are currently in development, and our upcoming official release will grant this possibility. This will get you going in a few clicks, by using some of our predefined Project Templates, of course using .NET 5.

We will continue to support compatibility with Long Term Support versions, as Microsoft plans to do. We aim to cover the same strategy as Microsoft, in order to ensure that you have the possibility to choose which platform to build your next app on top of.

For the future, we will continue to closely monitor and ensure compatibility with each Preview, RC, and Official release that Microsoft releases. A full list of the supported versions can be found in the Telerik UI for ASP.NET Core documentation.

The new .NET 5 release marks the beginning of an important era for both Microsoft and developers. Their main goal was to create a platform that enables developers to use the same languages and .NET APIs to create a wide range of different applications through different chip architectures on various operating systems.

Going forward there can be only one—.NET 5. That said we plan to put even more effort into the development of our Telerik UI for ASP.NE Core suite, in order to walk side by side with you and prepare the ground for your future web development.

In order to update your existing Telerik ASP.NET Core solutions to .NET 5 and benefit from the latest and greatest, all you need to do is follow the migration guide from Microsoft. Then, grab the latest stable NuGet Telerik.UI.for.ASP.NET. Core package as demonstrated in this article—the rest is automatically handled by Telerik UI for ASP.NET Core suite.

If you are just getting started with ASP.NET Core, we encourage you to visit and download a free trial from Telerik UI for ASP.NET Core Page. 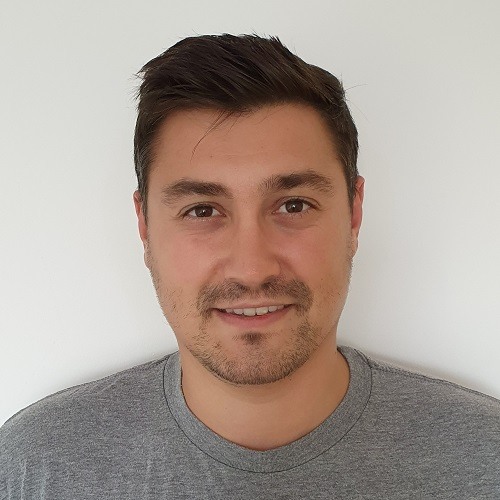 Nencho Nenchev (@nnenchef) started his career at Telerik back in 2012 as a tech support engineer in one of the Telerik ASP.NET Ajax teams. He then passed through the position of a Support Lead and is currently a Product Manager of one of the Kendo UI for jQuery, Telerik UI for ASP.NET Core, and MVC teams. Ever since he joined the company his constant focus is improving and evolving the big product family and providing best in class support to the customers. Apart from work, Nencho enjoys spending time with his family or playing different sports with friends.