RadControls for ASP.NET AJAX Q1 2010 release comes with native .NET 4 builds and JavaScript IntelliSense in VS 2008/2010


The Q1 2010 Beta release of RadControls for ASP.NET AJAX uncovered the veil about what is cooking for you for the official Q1 2010 release of the suite, namely:

- Native NET 4 builds of Telerik.Web.UI.dll and Telerik.Web.Design.dll (currently built against VS 2010/.NET 4 RC, later compiled against the RTM when it comes out)
- Javascript Intellisense support for RadControls for ASP.NET AJAX client scripts under VS 2008/VS 2010

Closely following the Microsoft's .NET framework release schedule and being one of the first who announced VS 2010 Beta2 and RC support, we are going to ship .NET 4 assemblies of our controls residing in /bin40 folder of the RadControls for ASP.NET AJAX installation. An important detail is that now the assemblies will be separated into /bin20, /bin35 and /bin40 folders (as opposed to the current /bin and /bin35 folders). The dlls are grouped in conjunction with one single criterion - the .NET framework they are built against. Thus depending on the targeted .NET framework, you will be able to choose the relevant assemblies and plug them in your project.

The screenshot below visualizes the new folder structure:

What about the JavaScript IntelliSense? Well, I believe this will be the shiny gem that each of us who use RadControls for ASP.NET AJAX and write javascript code will cherish. No need to burry yourself in the client API documentation, no more annoying js errors being generated from non-existing properties/methods or mistyped code slices! Simply register Telerik.Web.UI.Common.Core.js using RadScriptManager/MS ScriptManager under VS 2010 or MS ScriptManager under VS 2008 and enjoy the out-of-the-box JavaScript IntelliSense in the markup of your pages. 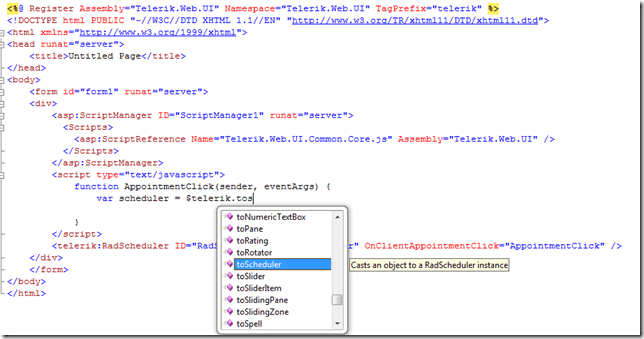 An important detail here is that the Telerik static client library exposes to<RadControlName>(object) and find<RadControlName>(id, parent) methods which gives you the ability to cast or find Telerik AJAX control's client object and then the IntelliSense will expose directly its properties, methods and events. Additionally, you will get information about the client methods signature and the type of the arguments passed to or returned from them. 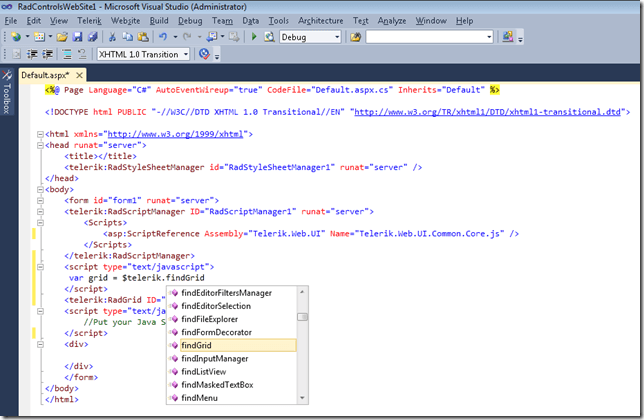 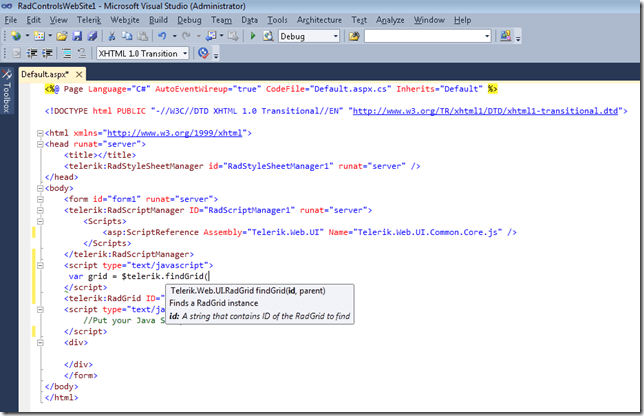 Finally, I will give you another sneak peak on a new feature that is shaping for the Q1 2010 release - VS 2010 Extension Manager deployment for Telerik Visual Studio Extensions for ASP.NET AJAX: 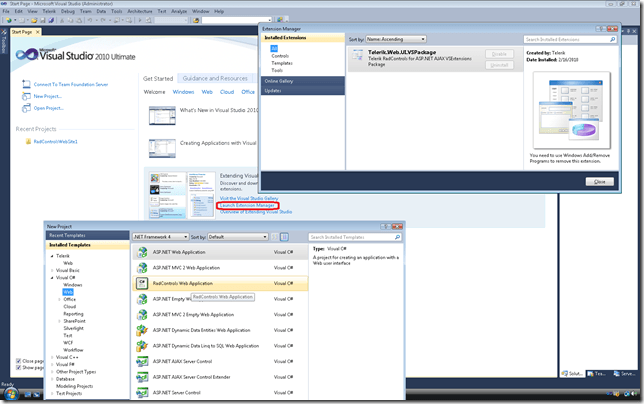 Already asking yourself when you will be able to get your hands on the Q1 2010 release? It is just around the corner and will go live by the end of the next week. The countdown already started...