The R1 2019 release webinar for Kendo UI highlighted many of the latest features that we recently added. Catch up with a summary of the webinar and its recording.

Recently, we shipped the R1 2019 release of Kendo UI. To help developers understand the impact of this release, we hosted a release webinar that walked through the latest features. This blog post is a summary of the webinar as well as answers to questions asked by attendees.

Our webinar highlighted many of the great features we’ve added to the R1 2019 release of Kendo UI: 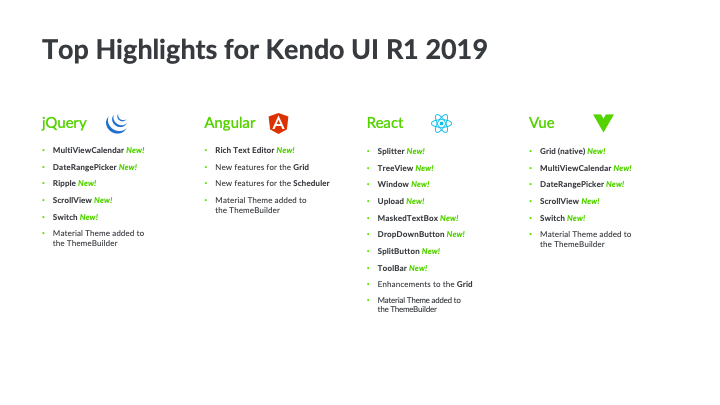 The webinar was hosted by Eric Bishard, Carl Bergenhem, Alyssa Nicoll, and myself (John Bristowe). Don’t worry if you didn’t get a chance to watch it live. We’ve posted it to our YouTube channel. In fact, you can watch it now!

During the webinar, we asked attendees to ask questions and offered the very cool drone as a prize for the best one. The winner is Bill Schubarg. Congratulations and thanks for your great question!

We answered a number of questions during the webinar as well as on Twitter through the hashtag, #HeyKendoUI. Here’s a sampling of the questions we received along with their answers:

What are the jQuery requirements for the latest version of Kendo UI and/or its upgrade path?

Yes, we do offer localization/globalization throughout all of our widgets, including the DateRangePicker! You can read more about this support on our website: Localization Overview.

Does the Grid component in Kendo UI for Vue have a pop-up editor?

Thanks to everyone who joined us for the webinar, we received a lot of great feedback. We hope you love the new features and improvements we've made to Kendo UI in the R1 2019 release. Please feel free to leave your thoughts in our Feedback Portal or in the comments below.