On this episode of Eat Sleep Code, guest Derick Bailey from Watch Me Code talks about using messaging patterns like RabbitMQ to create scale-able applications. We also learn how messaging promotes asynchronous behavior throughout an application. 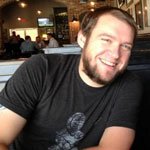 Derick Bailey is an developer, entrepreneur, author, speaker and technology leader in central Texas (north of Austin). He’s been a professional developer since the late 90’s, and has been writing code since the late 80’s. In his spare time, he gets called a spamming marketer by people on Twitter, and blurts out all of the stupid / funny things he’s ever done in his career on his email newsletter.