Improving the State of your App with Redux

Redux is a self-proclaimed "predictable state container for JavaScript apps." It has gained popularity through its association and integration with the React library. In this article, we'll look at the basics of Redux architecture and then explore how to build a "real world" application using Redux and Angular 2.

Redux is a lightweight, standalone library that can be used in any JavaScript application that provides a simple but powerful set of features. It can solve many application-specific problems and enable aspects such as:

Redux is designed to provide these features in a pluggable fashion so that the rest of the application doesn't have to change. In fact, once Redux is implemented some developers may build components without ever modifying a line of Redux-specific code.

Redux is especially suited to front-end frameworks because it provides a universal way for components to respond to state without imposing fragile hierarchies. Instead of depending on communication between parent and child controls, components can interact directly with the application's global state, referred to as the "store."

You only need to understand three fundamental concepts to start developing Redux applications.

The store is your domain. It is an object tree that represents the application state. For example, consider a health-focused app that accepts some basic information and uses well-known equations to compute:

An action is a message that your application dispatches that may potentially change the application's state. For example, the act of updating an age, changing height, or selecting gender are all potential messages that would change the state of the health store.

Here is a simple definition for an action:

And here is a simple function that will create an implementation of the action. With this approach, I can create the action anywhere in my app simply by calling changeAge:

Actions are dispatched through the store that is provided by Redux. Here is an example of dispatching the message that age has changed:

This simplifies inter-component communication. Instead of building your components to raise events, you simply dispatch messages to the store. In an Angular 2 app, for example, you could skip exposing an EventEmitter.

Why is this advantageous?

There are many approaches to front-end architecture, and you must decide what works best for you and your team. One approach is to assume components are ignorant of business logic and focus on processing inputs and emitting outputs. Although this allows you to reuse components for different purposes, it also creates coupling between components. If you refactor a component by changing where it "lives" in the tree, you must refactor several other components for the values to propagate correctly. 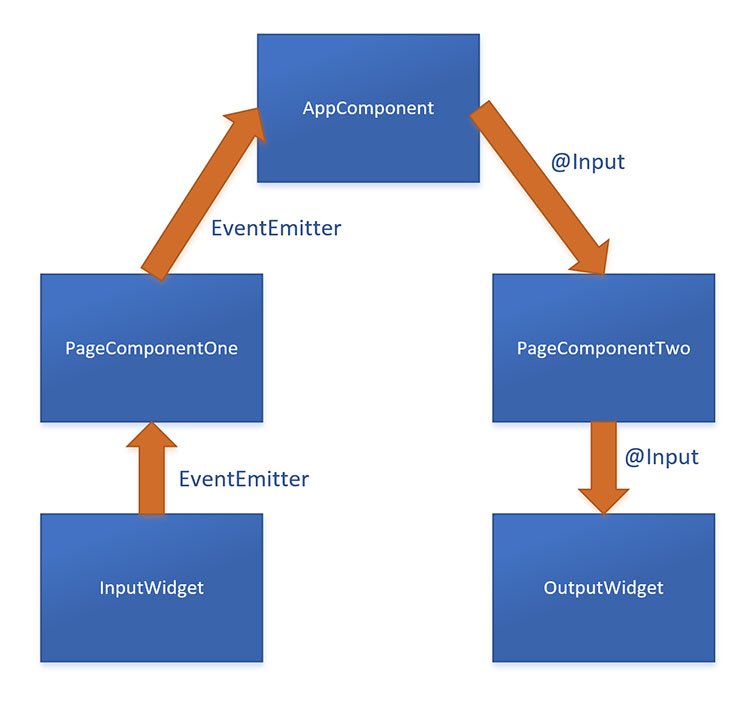 Another approach is to create specific components that are "business aware." In other words, the component to input an age value takes a dependency on the application's store and emits an age message. Instead of a generic event emitter, it dispatches an event-specific message. Now that component will function the same regardless of where it lives in the display hierarchy. Here is the conceptual flow using a Redux store: 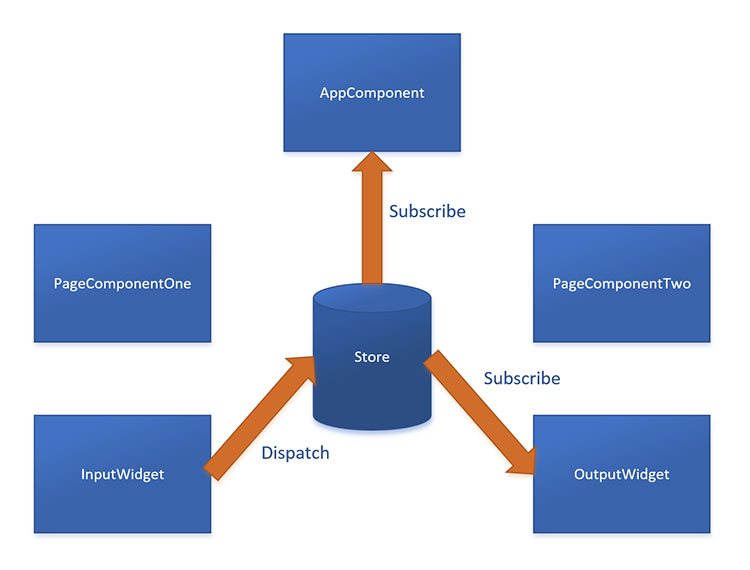 An action simply indicates something happened. The action helpers you create don't need to have a one-to-one correlation with how the store changes state. For example, in my Redux Adventure app, requesting to move in a direction returns a different action depending on whether the adventurer is likely to run into a wall:

Now that you know how to dispatch messages, the next step is to interpret how those messages impact the application state. A reducer is a method that transforms the store based on an action. There are two important rules for writing reducers.

These rules are important because the benefits of Redux all leverage its consistency and predictability. Violating this will produce unexpected results. For example, although your code will run with this reducer, it is not considered pure:

This is also not considered pure:

So how do we create a pure function? The reducer should reconstruct a brand new state object based on the current state and the action passed. Fortunately, you don't have to manually copy every property because JavaScript has some nice helpers built-in. First, we'll use Object.assign to create a new object and copy over properties. Then we'll take advantage of the object spread operator that is supported by TypeScript to copy values into a new array. Here's what the age reducer looks like now, creating a new object and updating the BMR history:

Note: Because it is so easy to accidentally create functions that mutate state or have side effects, many developers use libraries like immutable.js to ensure the store is not mutated and leverage Object.freeze for testing.

Now that you've learned about the store, actions, and reducers and have examples. How does Redux fit into a "real" application?

To illustrate Redux in a front-end application, I built an Angular 2 app using Redux and the Kendo UI Angular 2 controls. You can see instructions for building the app yourself at the repository and interact with the live demo. 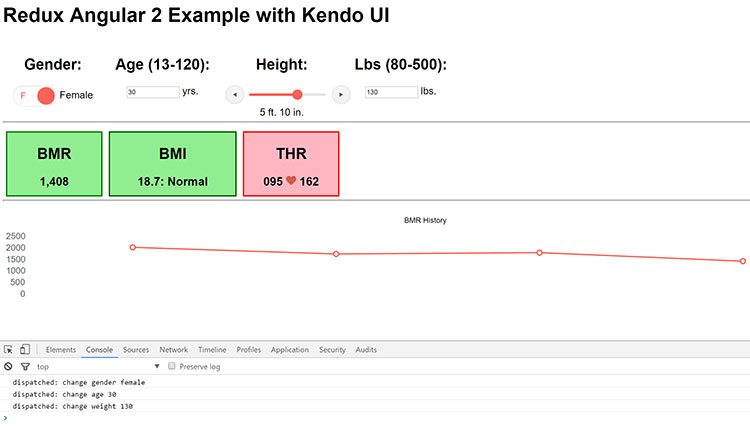 The application has four components that take input for gender, age, height, and weight, three components that display BMR, BMI, and THR, and a graph that shows BMR history (this is contrived because typically BMR wouldn't change often, but it helps illustrate how Redux works in the app).

You can see the definition for the store, actions, and reducers in the state folder. Creating the store is as simple as calling the function createStore and passing it a reducer. Ignore the "middleware" for now.

Note that everything in the state folder can be built, run and tested completely independent of any front-end framework (with the exception of the Angular 2 test bed that is used to register the tests with Karma). This allows you to build the state and logic for your app independently of the UI. You can explore the various tests for creating actions and reducers and note how the reducer tests leverage Object.freeze (this will throw an exception if the reducer tried to mutate the store state).

The HeightInputComponent uses a Kendo UI slider in conjunction with an Angular pipe to display the height and allow the user to change it.

The component very simply sets an initial height based on the store, then dispatches messages whenever the height changes and is in a valid range:

This is very easy to test:

Although the component takes a dependency on the application state, it does not have to couple to other components or emit any events. All messaging is handled through Redux via the state of the store itself.

Of course, the output controls must respond to changes to state. Take a look at the BmiDisplayComponent that uses a pipe to show the BMI level and changes the tile color based on level of risk:

The component's code simply subscribes to the store and updates the various flags whenever the state changes:

Again, this makes it very easy to add new components. The chart component was added later in development, but is completely independent of the other controls and simply subscribes to the state changes like any other control. The subscriptions are also easy to test:

When you want to add other components, it's as simple as taking a dependency on the store then publishing changes or subscribing to events.

Redux allows you to provide middleware to intercept actions. The middleware can intercept the action and dispatch the same or a different action, and has access to the store. The sample app logs state changes to the console. This is implemented without touching any of the existing components. It's as simple as defining a middleware function that logs the details of the action (you could also dump the state of the entire store if you so desired) and registering it:

There is existing middleware to do everything from logging to recording actions and even integrating with the browser to inspect state as the application is running (take a look at the Redux developer tools).

This article scratched the surface of what Redux can do. For a more in-depth tutorial of a text-based adventure game with a dungeon map, read An Adventure in Redux. Be sure to check out the formal Redux documentation for advanced concepts, tutorials, and even free videos.

You'll find Redux is a powerful toolset that can transform your approach to building apps. Modern developers complain about "framework fatigue" and so many options for building enterprise apps with JavaScript. Redux is a refreshingly simple, easy library that you can leverage regardless of whether you are using Angular 2, React, Aurelia, or just plain old vanilla JavaScript for your apps.