A couple of weeks ago we asked you to help us decide how to handle IE6 support in Kendo UI. As we set-out to build the premiere toolset for professional JavaScript and HTML5 development, we want to make sure we avoid introducing any unnecessary "hacks" in the code base. Supporting IE6 would require a lot of hacks, and the time needed to add and test those hacks would take away from valuable new feature development.

Still, before we make a decision, we want to consult you, our customers (or for now, our eager beta testers). We know that IE6 is still a reality for some people, so we want to make sure the lack of IE6 support won't affect your ability to use Kendo UI.

The results are in!

Perhaps the results aren't surprising, but they are definitely definitive: 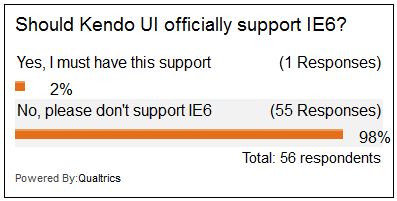 Votes to keep IE6 support: 1. Votes to drop IE6 support: everyone else. Added with the comments and opinions shared in the Kendo UI forums, and your voice is clear.

Kendo UI will not support IE6

So that's that. Kendo UI will not support IE6. All hacks in the current beta designed to deliver support for IE6 will be removed and they will not be part of the Kendo UI RTW later this year (or even part of the upcoming beta updates).

Ultimately we think this is a great move for Kendo UI. It will help the engineering teams evolve Kendo UI faster and it will keep the code base (HTML/CSS/JavaScript) a bit more compact. Thankfully, IE6 will be effectively dead soon due to a renewed push by Microsoft to kill it, combined with the strong adoption of Windows 7 that is helping end XP's life (the harbinger of IE6). Those of you still requiring IE6 support will hopefully be able to join that wave this year and start using a supported browser.

Unlike frameworks that are burdened with IE6 hacks (such as jQuery UI), Kendo UI will be bright-eyed and clean, unchained from the Corpse Browser when it ships this year.

As exciting as it is to finally have the freedom to start building tools for HTML developers without hacking IE6, at least two more versions of IE lay between utopia and today. IE7 and IE8 are definite improvements on the horror that is IE6, but they still require the occasional hack and targeted code to deliver full Kendo UI support. At least we can now use transparent PNGs with less concern!

Maybe when IE7 is 10 years old (in 2016) we can have this same conversation about killing IE7. Until then, IE7 is the new "backstop" browser. It is the new IE6.