How to Pick Your Platform: Silverlight, Metro, or HTML5 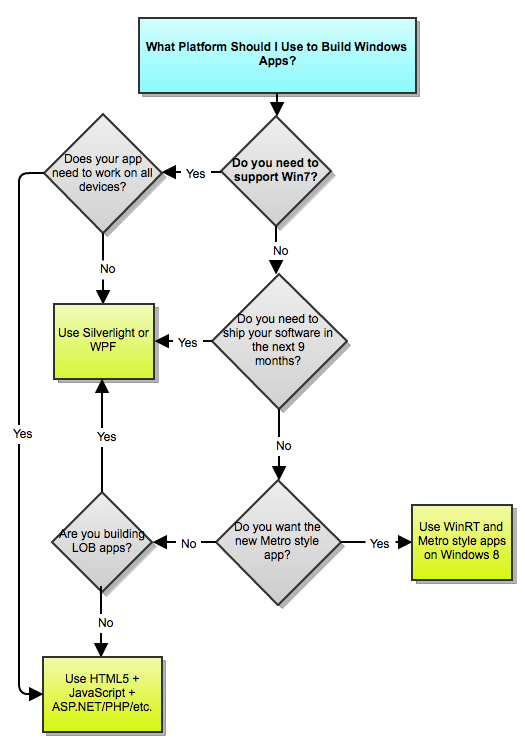 While Windows 8 is ushering in an exciting new model for Windows development called "Metro style apps" that run a new "unified" Windows Runtime (WinRT), it's not necessarily the right choice for all new Windows software development. In fact, there are a lot scenarios where it's not a good choice.


In this over-simplified decision tree, I try to provide some crude logic for how to pick between your platform options. Clearly, there are many nuances not covered in this tree, but I'll work on expanding the "logic" to make it more bullet proof in the coming weeks.

The first decision is the most important, though: Do you need to continue building apps that work in Windows 7?

If your answer to this question is "Yes," Metro style apps and WinRT should not be on your radar. These are Windows 8 only technologies, and there will be no backport layer that will let you run Metro apps on Windows 7.

That means any project that has as a requirement "Support Windows 7 clients," should only be considering WPF, Silverlight, WinForms, and "web" technologies (HTML/JavaScript + their server-side counterparts, like ASP.NET). It's that simple.

IF, however, you want to put apps on the Windows Tablets that will start shipping late next year, and IF you accept that these apps will only run in that Windows 8 Metro environment, then you should start digging-in to and learning WinRT.

For everyone else, don't lose sight of reality. And reality in a Windows 7 world (that will still work in a Windows 8 world) means Silverlight, WPF, and HTML5. (And, of course, Telerik is already armed with all of the tools you need for today's reality, and we're preparing tools for tomorrow's Metro option.)
HTML5, Kendo UI, Metro, silverlight