Easy Charting with JavaScript and HTML5 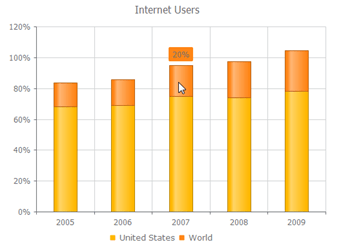 One of the coolest things that HTML5 brings to the table is technology for doing rich visualizations directly in the browser. Think about it. For years, web developers have been forced to do one of three things if they want to present a rich visual element (like a chart):

None of these options are ideal for the HTML/JavaScript developer. For doing something as simple as drawing a basic shape, web developers have been out-of-luck in the browser.

Canvas is part of the HTML5 spec. It provides developers with what amounts to a writable bitmap area on a page that can be manipulated with JavaScript. In fact, you must use JavaScript to display anything on a canvas. It is not markup based, so API calls are required to draw.

The pixel-driven nature of canvas makes it ideal for scenarios where rendering speed is key, such as games. It doesn't matter if you have 1 or 10,000 "objects" being painted to your canvas, if the resolution is the same, it's all about redrawing the same pixel area.

The downside of canvas' pixel-driven nature is that it's harder to interact with. If you do have "objects" that you want users to interact with, you have create and track those objects on your own in JavaScript. And a designer can't create a "canvas" in Illustrator. API calls have to be programmed to make canvas work.

Scalable Vector Graphics have actually been around much longer than HTML5. Browsers like Firefox, Opera, and Safari have offered varying degrees of support for SVG since 2005. Why is SVG only now getting a lot of attention?

You guessed it. Internet Explorer.

One of the only browsers not to support SVG in the last 5 years was IE. And since IE was (and is) the dominant browser during this time, SVG usage was minimal. IE9 has finally added SVG support, though, and along with improved support across all other browsers, SVG is finally ready for primetime.

Unlike canvas, SVG is vector-based (not pixel-based) and is created with markup (instead of APIs). SVG elements, when rendered, actually become part of the page DOM, which means they have properties, events, and are much easier to use for illustrations that expect user interaction. And since SVG is markup-based, designs can be easily exported to SVG format from Illustrator, loaded by the browser, and even cached like images.

The downside to living in the DOM is memory. Highly complex visualizations (thousands of objects) will strain browsers since every element in the SVG image is an object (with its own memory needs). That makes SVG great for things like data visualization or logos, leaving complex visual rendering to canvas.

Clearly, adopting canvas and SVG for rich, interactive visualizations in HTML is a no-brainer, but what happens for older browsers, especially IE (which, as we said, lacks any SVG support pre-IE9)? Fortunately, there is a very similar technology to SVG baked-in to IE5 through IE9 called Vector Markup Language (VML).

Originally created for Microsoft Office, VML has a lot of overlap with SVG. When used in conjunction with SVG, VML gives us a way to reach most actively used browsers with some type of in-browser rendering.

Now that you fully understand the "drawing" technologies of HTML5, let's look at how Kendo UI Charts make it easy for you to add rich data visualizations to any HTML site or app.

Why not canvas? Three reasons:

Getting Started with Kendo UI Charts

Using Kendo UI charts to do data visualization couldn't be simpler. All you need is some data (JSON, JavaScript array, whatever) and a few lines of JavaScript.

To setup a chart, we need to define where in the HTML we want it rendered using a simple DIV tag, like this:

And then we need to initialize the Kendo UI Chart using the simple API. For this basic example, I'll give the chart a title, define 2 series of local data (one defined in the Chart config, one an external JavaScript array), and define my axis.

Which produces the following data visualization: 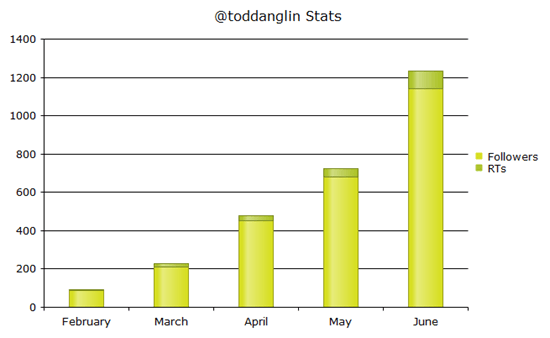 This isn't an image. (Well, this is, in the blog post, but you know what I mean.) This is SVG drawn directly in the browser with JavaScript. This works in modern browsers. This works in older versions of IE (thanks to Kendo UI Chart's auto-VML). This works on phones, tablets, and devices.In fact, you can give this chart a spin with this live JSBin.

With the rendering happening the browser, this opens the door to:

As the Kendo UI Chart evolves in the current beta, it will add many of these features, like interactive charts, giving you even more power through a simple API.

In fact, even in the current beta, you can mix chart types. For example, I can edit the previous example to make one series a column chart (vertical bars), and the other series a line chart: 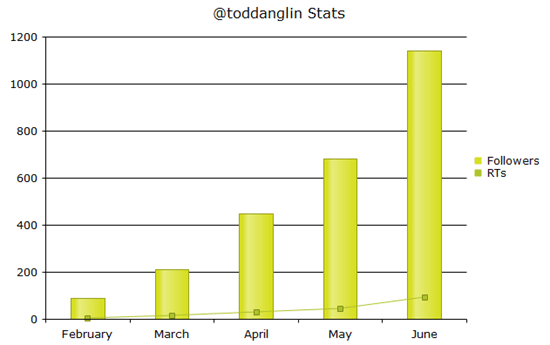 To wrap-up this brief introduction to the Kendo UI Chart, let's take advantage of our new found ability to draw charts in the browser and configure Kendo UI Chart to redraw with new data 10 times a second. Unfortunately, the current Kendo UI Chart beta doesn't yet have an API that let's us do a 1-step animated refresh of the chart, but we can easily handle this scenario by simply recreating the chart each time our data changes.

You can see the live effect by visiting this updated JSBin example, but here is the relevant snippet of JavaScript:

This code clearly has a few external dependencies (which you'll find in the complete JSBin example), but the concept is simple. Using a JavaScript timeout executing in 100ms cycles, recreate the chart with new random data. Each time this happens, the chart SVG (or VML) will rapidly redraw in the browser.

In a real-world implementation, you'd more likely redraw the chart as the result of getting new data from the server or changing user input. But this example serves to illustrate that with Kendo UI Charts drawing in the browser, you can do some cool things with data visualization that don't require the help of a server or browser plug-in.

Enjoy! And stay tuned for even more info on things you can do with HTML5, JavaScript, and Kendo UI.