RadControls for Silverlight and WPF - the StyleManager is old.

It’s not that it isn’t useful. But it was implemented long time ago when we were shipping themes for Silverlight 3 that had no support for Implicit styles. When we were building it initially we never had the time required for the excessive tests such core functionality needed. It worked for the common scenarios and served for overcoming some framework limitations but in time the frameworks matured and the StyleManager piled up bug reports and feature requests. Some of the bugs laid in its integration with the IDEs and some of the feature requests could never be implemented because of the StyleManager’s nature so there wasn’t much we could do.

We had an internal discussion on what problems the StyleManager is causing and what benefits does it provide and it went something like:

It had to comply with the following requirement:

Although we were doing our best to fix or provide workarounds and help articles for StyleManager’s limitation it was clear we had to migrate gracefully to what the frameworks now offer – theming through Implicit styles.

We never intended to cause a huge breaking change. So we still support the StyleManager and probably we won’t obsolete it anytime soon. However, currently all it can do can also be implemented with means provided by the framework itself. And when you are doing it the framework’s way you also get all the benefits of the tools, intellisense, design time and predictability of your code. Surely you haven’t met some of the problems. Perhaps you have been simply dragging controls from the toolbox in your used control, never inherited from our controls. Probably you have never installed Blend either. But the world goes on, Blend and VisualStudio now share the same codebase and like it or not some of the Blend functionality is now available to you with some of the VisualStudio distributions. We also provide VisualStudio extensions that would reference the Implicit styles resource for you when you are creating a new project without-a-single-line-of-code.

Now we are shipping the Office2013 with Implicit styles.

You will have to migrate from StyleManager to Implcit styles only if you want to use the new theme or if you used to change themes at runtime and you want to add it as a choice to your application.

Should you be starting a new project you will find out the Implicit styles will pay off in short terms.

We are sorry if we caused any inconvenience but we really believe we are on the right track here. 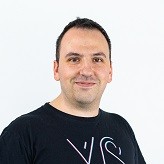 Panayot Cankov has 15 years of experience focused on UI. He has spent 9 years at Progress working on the XAML stack and the NativeScript framework. Today he is pushing forward AR/VR technologies as he is a big believer in them, along with AI/ML for being the foundation of the next generation line of business application experiences.