The Apple Watch has been a long rumored device that finally appeared in September, followed by a Watch SDK, called WatchKit, in November. The introduction of the SDK maybe raised more questions than it answered, and like everybody else, we're looking into the future for answers from Apple. One question is: how can I send data, larger than what is allowed for a push notification, from the iPhone to the Watch? Well, there are several ways to do it:

There isn’t a single recommended approach by Apple, so all these methods are legit. However, NSUserDefaults is more appropriate for user preferences, rather than real data, and files may not be a good solution for all data scenarios. Therefore, if we have to choose, we will bet on Core Data, and today I am going to show you how you can send your Telerik Chart for iOS to the Apple Watch in the form of an image and a string stored in Core Data. 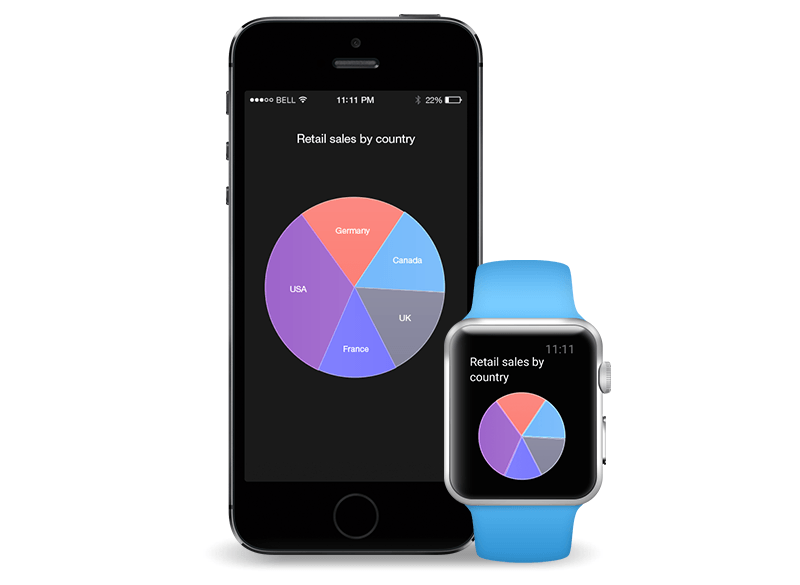 The most common scenario is to have an existing iPhone app project, using Telerik Chart for iOS, which you want to compliment with an Apple Watch app. So, this tutorial assumes that you already have such a project, and it’s called AppleWatchWithTelerikChart. Don’t worry if you didn’t check the Use Core Data checkbox back then when you created your iPhone app. We will assume that Core Data is not enabled initially, and will show you how to enable it in the existing app. Last but not least, this tutorial assumes that you are using Swift as your primary language.
The complete project structure will consist of an iPhone app, a WatchKit app and a framework that directly communicates with Core Data. We will use Xcode 6.2 Beta 4 to do all this. So, let’s get started.

Now it’s time to implement the code needed to talk to the SQLite db behind the Core Data. The core logic of this implementation is the boilerplate code that you get in the AppDelegate.swift file when you create a project clicking the Use Core Data checkbox. Basically, this core logic consists of the applicationDocumentsDirectory, managedObjectModel, persistentStoreCoordinator and managedObjectContext properties and the saveContext method.

So, let’s add these to the WatchCoreDataProxy.swift the following way:

Now that we have the iPhone app, the proxy library and the WatchKit app, it’s time to make sure that the iPhone app and the WatchKit app can actually share data. The thing that enables sharing data in whatever form between applications (Files, NSUserDefaults, CoreData) is called App Groups; both applications should be part of the same App Group. To enable the App Groups feature for both apps:

Sending and Getting the Data Using the Proxy Library

With the CoreData proxy, the App Groups enabled and the overall project structure built, let’s send the data from the iPhone through Core Data to the Apple Watch. We will send an image of our chart and a string.
This is it from the iPhone app side. Now, let’s get the data from the SQLite DB and set it to the image and label objects on the Watch.
This is one way to send data from iPhone to Apple Watch. We are looking forward to seeing if Apple will introduce another API for this data transfer between devices, but until that time comes, you can use this approach. The complete Swift project following the steps above can be found at GitHub.