Razor Components for a JavaScript-Free Frontend in 2019

Could a server application architecture that promises to provide an alternative to JavaScript be the next big thing for .NET developers in 2019? In this article we'll discuss Razor Components, a new framework that promises JavaScript free web development backed by .NET technologies like C#, .NET Standard, and SignalR.

Could a server application architecture that promises to provide an alternative to JavaScript be the next big thing for .NET developers in 2019? In this article we'll discuss Razor Components, a new framework that promises JavaScript free web development backed by .NET technologies like C#, .NET Standard, and SignalR. This new technology is on the road-map for .NET Core 3.0 and it's showing a lot of potential.

Author's note: In my opinion, the current name choice of “Razor Components” leads to confusion. To clarify what we're discussing:

On the surface the concept of Razor Components brings up more questions that it answers, so let's dig deeper into the architecture.

Razor Components has a unique architecture that allows a .NET application to run server-side while the user interface runs out of process in a remote browser. The combination of .NET Core and SignalR allows us to write web applications without JavaScript.

So what do we do with this executable and how does it translate into a magical thin-client enabled web application? To understand this we'll need to take a look at the server & client relationship.

At the time of writing, Razor Components is still called ServerSideBlazor in the related APIs.

Once the server application is ready we can make an initial web request request, this leads us to setting up the browser as a “thin-client”.

The communication between the client and server is done through SignalR as binary data. The packets of data contain just the necessary DOM changes and not the entire rendered DOM. There's NO Viewstate a la ASP.NET WebForms to worry about with Razor Components.

With the client - server relationship understood, now we can focus on the UI portion of the framework.

Since Razor Components runs server side as a .NET Standard app, logic is written using .NET technologies. This is possible due to the Blazor framework which employs the RenderTree, a DOM abstraction similar to virtual DOMs used in popular JavaScript frameworks like Angular and React. Let's look at UI side of the framework to understand how components are written.

Razor is the popular template markup syntax that was introduced in ASP.NET MVC 3.0. Razor gained popularity through its simplicity in that it requires an @ symbol to begin a code-block without an explicit closing tag. Unlike the MVC framework, where Razor is used to explicitly write HTML, Razor Components emits a RenderTree. In Razor Components every .cshtml file is as a component which can be used as an element, ex: Widget.cs becomes <Widget>. Carrying on the tradition of simplicity can be seen in the following image as much of the concept of a component can be understood from some basic annotations.

The header of a component defines special characteristics or features of a component such as: routing, layout, and dependency injection. In the image, we can see that this component has a route specified by @page "/counter". The component acts as a page when visiting the route /counter, additionally the component can be used in other components as the element <Counter>.

All markup inside the component becomes part of the RenderTree. This shares some similarity to the way .jsx is used in React. Given the example <h1>Counter</h1> the framework will create the following code behind the scenes when building the RenderTree builder.AddMarkupContent(0, "<h1>Counter</h1>\n\n");. With the RenderTree abstracted away, developers can focus on writing components with Razor and HTML.

Component logic is written as C# within a @funcitons block. Fields, properties, and events are bound using Razor syntax. Referencing an event or value from the code block within the component's markup is as simple as using @propertyName. 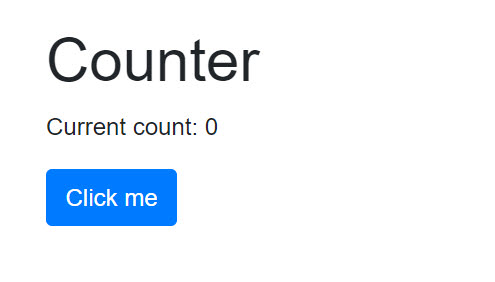 In another file we can now set the CountBy value on the component element.

The parameter CountBy can also be bound to other components on the page allowing the value to be set dynamically by the user. For example, we can place an input on the page and bind its value to the CountBy property. Now the counter's behavior can change at run-time by changing the value of the input.

The component model is easy to learn but provides a robust base to build complex UIs. Additional libraries can also be used to support the application logic and UI experience.

A Broad Range of Options: Including JavaScript

Because Razor Components leverages .NET and the browser, the architecture allows for some interesting integration points.

.NET Standard and Beyond

Since Razor Components is a .NET Core application, it works with .NET Standard libraries, this means existing NuGet packages and SDKs may be compatible. This includes most .NET Standard libraries provided they do not interact with or depend on technologies that are tightly coupled to a platform. For example, a library like MarkDig which is used to parse Markdown into HTML is compatiable because it has no dependencies beyond .NET Standard 2.0. At the time of writing, even the advanced .NET based Machine Learning SDK - ML.NET is compatible when used as a service within a Razor Components application.

The following example shows an example of how a C# abstraction can be written to interface with the browser's geo location APIs, specifically the getCurrentPosition method. From .NET, the JSRuntime.Current.InvokeAsync method is used to invoke a JavaScript module interopGeolocation.js.

Through invokeMethodAsync the JavaScript module is able to call back into .NET returning the results.

The abstraction is then used within the application as normal C# code. This interop can written as a .NET library that can be shared among many projects.

Ideally, once an interop is created for an API, it shouldn't have to be created again.

Our primary goal remains to ship support for running Blazor client-side in the browser. Work on running Blazor client-side on WebAssembly will continue in parallel with the Razor Components work, although it will remain experimental for a while longer while we work through the issues of running .NET on WebAssembly. We will however keep the component model the same regardless of whether you are running on the server or the client. You can switch your Blazor app to run on the client or the server by changing a single line of code. See the Blazor .NET Conf talk to see this in action and to learn more about our plans for Razor Components:

If you're the type of developer who likes to test things early, you can try Blazor Components today. At the time of writing, Razor Components is still being branded as Server-Side Blazor which can be found at Blazor.NET. Follow the instructions under "get started" and be sure to choose the “Blazor (Server-Side in ASP.NET Core)” project type. 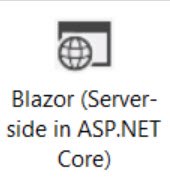 Applications load quickly since only a small amount of JavaScript is required to bootstrap the client and no .NET assemblies are transferred to the client as with WebAssembly. Even during operation network traffic is light because communication between the browser “thin-client” and the server is a small binary packet. However, because web sockets are used, the client and server must always be connected. This means that Razor Components apps cannot work in offline mode. If offline mode is a must for your application, then the WebAssembly equivalent Blazor application may be a better choice. With that said, Blazor has yet to receive an official release date or promise of support from Microsoft.

One last point of concern to some may be the question of “how will Razor Components scale.” Since Razor Components is built with SignalR, it has the advantage of Azure. Azure SignalR Service is a fully managed service infrastructure that works seamlessly with ASP.NET Core SignalR. Integrating SignalR Service requires very little code modification to add automatic capacity provisioning, scaling, or persistent connections.

Razor Components, the server-side implementation of the Blazor framework, is a new take on web development. By utilizing the web browser as a thin-client, Razor Components offers a new alternative to JavaScript frameworks. Its component model is simple enough that it maintains a short learning curve, yet is robust enough to be extremely productive. Even though Razor Components is new, its ability to use existing .NET libraries, tooling and optionally JavaScript's ecosystem as well makes it a strong candidate for frontend web development.

This post is part of the Second Annual C# Advent. Check out the advent calendar for other great posts!

BlazeDown: An Experiment with Markdown and Blazor

A Breakdown of Blazor Project Types