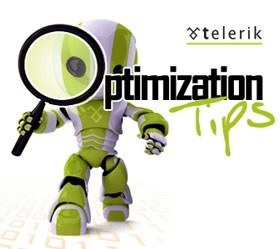 In the Q3 2008 release, Telerik introduced a new control to the RadControls for ASP.NET AJAX suite called RadInputManager. Like RadInput, it is designed to enable you to provided textboxes to your users that give real-time validation and feedback based on the entered text. The big difference with RadInputManager, though, is that you don't have to add lots of Telerik Input controls on your page to get this real-time feedback. Instead, you can quickly convert "standard" ASP.NET TextBoxes to RadInput textboxes via the RadInputManager configuration- similar to how you can use RadAjaxManager to quickly ajaxify your page without littering it with UpdatePanels.

When ASP.NET developers want to validate form inputs today, that usually represents the beginning of a time consuming task where form validation controls are add to the page for every input that needs to be validated. After the assorted RequiredField, RegularExpression, and Range validators are added, their prosperities set, and some type of UI added to display their error messages, you're left with a page cluttered with markup that is unrelated to the actual layout or function of the form. Further, any complex validations on the page are usually set such that they do not get evaluated until the form has been submitted, meaning users get feedback regarding their input errors long after the mistake has been made. Not great for usability.

With RadInputManager that all changes. Instead, validating form inputs becomes easy and painless:

No markup littering. No need to set properties over and over again on controls that are providing the same validation. And as a bonus, when you use RadInputManager, users get real-time feedback when their input does not validate, enabling them to correct it before submitting the form.

We won't go in to fully detailing the RadInputManager's properties- there are great docs available for that- but I will highlight it's capabilities as a form input validation control. Via the control's simple configuration properties, you can accomplish any of these validations:

RadInput has been part of the Telerik RadControls for quite some time and- like the RadInputManager- it provides rich, validated text input. In fact, the RadInputManager is really just simplifying and optimizing the creation of RadInput controls on your page. Rather than manually adding a RadInput every place you need input validation and then initializing all of those controls separately, RadInputManager allows you to simplify the the configuration and optimize the initialization on the client. For example, if you needed to validate 5 numeric textboxes on a form, you might do this with RadInput:

Notice the duplication of properties we have to set for each control. Also note that if we want to change the validation in the future, we have to replace the entire input control. With RadInputManager, the same configuration might look like this:

Where in the above code snippet I have "TextBox1" through 5 somewhere on my form. Now I'm only setting my validation rules once, and I even have the ability set the "IsRequired" flag (something not available with RadInput). If I need to change the validation of a TextBox in the future, it's a simple matter of defining a new "Validation Setting" in my RadInputManager and adding the TextBox to its "TargetControls" collection.

When you use RadInputManager instead of RadInput, you're optimizing your page in two ways:

To observe this, we'll create a simple test that is made-up of two pages: one page has 40 RadInput controls (10 of each flavor, Numeric, DateInput, MaskedTextBox, and TextBox) and the other 40 standard TextBox controls with RadInputManager (configured with 10 controls for each setting type, Numeric, Date, RegEx, and TextBox). We'll load both of these pages in FireFox six times (on an empty cache each time) and measure total bytes received, JavaScript bytes received, HTML bytes received, requests, and average page load time. We'll then compare the numbers to see the relative difference (not absolute, since absolute times are impacted by many factors) RadInputManager has on page performance.

As a follow-up, we'll also re-run the tests- both with RadInput and RadInputManager- with the RadManagers to see how they affect overall page performance.

Bytes Over the Wire 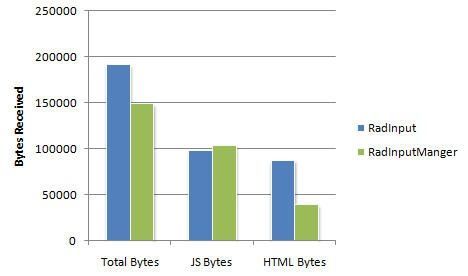 When a page is requested, all page resources (like JavaScript) will be cached and the cached versions will be used on subsequent page loads. The HTML, however, will be requested and sent every time the page loads.

So while RadInputManager does send slightly more JavaScript, those resource gets cached on the initial page request and then the lightweight HTML gets exchanged after that. With RadInput, you're passing twice as much HTML for every page request. 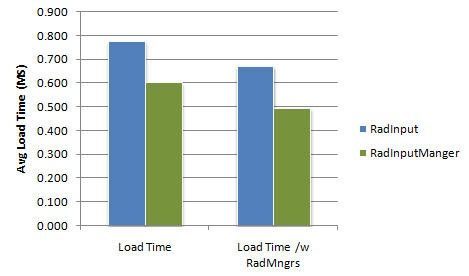 Hopefully the evidence presented in this article will help you understand the benefit of using RadInputManager in your own projects and show you yet another way Telerik is trying to deliver more than expected when it comes to helping you optimize your web applications.