Takeaways from the Concatenate Conference, a free conference for Nigerian developers with topics ranging from frameworks to design systems, performance to animation.

The Nigerian developer ecosystem has seen a lot of advancements in the past year, from organizing meetups weekly to organizing an international conference.

Concatenate Conference was created by Christian Nwamba, Brian Holt, and Sarah Drasner after a terrible experience of visa denials for Christian that stopped him from attending several other conferences he had been invited to as a speaker. The idea to hold a remote conference here in Lagos, Nigeria, came up as a result of the help of Sarah and Brian, the co-organizers. The event was targeted as a two-day, free conference for Nigerian developers, with topics ranging from frameworks to design systems, performance to animation. The inaugural conference was held on August 10-11, 2018, in Lagos.

The speakers lineup for the event was amazing. We had all top speakers from around the globe, speaking remotely about talks including serverless, data visualization, web accessibility, GraphQL and more.

The first day of the conference commenced with Simona Cotin giving a talk on how to “Build Node.js APIs Using Serverless.” She did a great job explaining the intricacies of crafting Node.js applications with serverless architecture. 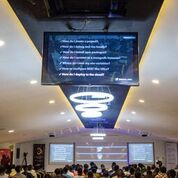 Next up we had William Imoh delivering a talk on “Static Sites on Steroids.” He did an awesome job outlining how to generate a static site using Gatsby.js.

Christian Nwamba then took the crowd on a journey with his talk on “GraphQL vs. REST”—he churned out the goodness of GraphQL to the attendees and why it’s a go-to option as compared to REST. 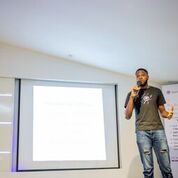 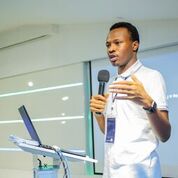 Sarah Drasner also went on to give her talk on “Serverless Functions and Vue.js.” She did a wonderful job breaking down the serverless concept and how to leverage it in Vue.js applications. 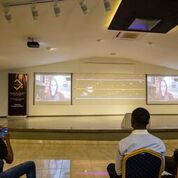 The next session had Burke Holland giving a talk on “VS Code Can Do That?!?” His session covered cool tips and tricks we had no idea about, mostly on how to leverage VS Code for a better development experience. Some tips I really loved included when he explained how we can utilize Emmet in VS Code to make writing HTML much easier, and Font Ligatures with Fira code to provide a better aesthetic to your code base.

Jem Young also had a lot to share on his talk “How Things Work.” Zach Leatherman’s session was a captivating talk on “Web Fonts are Rocket Science,” and he discussed useful ways we can leverage to render web fonts quickly without disruption. Jason Grigsby had a session about “Designing Progressive Web Apps,”Aaron Gustafson gave a talk on “Designing the Conversation,” and Shirley Wu, the last speaker for the day, surprised the entire crowd with her presentation on “Data Visualization for Web Developers.” She did a live code session and demo of an application using React and D3.js that explains the concept of data visualization.

A curated compilation of all talks from Day 1 was made by Adewale Adeoye here. 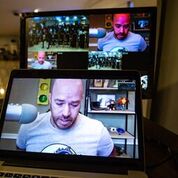 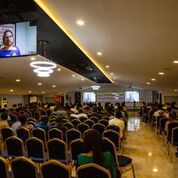 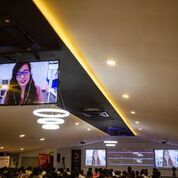 The second day started out with a quick session by Sani Yusuf. His talk, “Dear Developer, Focus on You,” was centered around how developers can achieve self-development to stay relevant in their career. The next speaker was yours truly. I shared about “Crafting Rich Documentation with Vuepress.” My talk was focused on the problems with documenting software and how you can leverage Vuepress as a solution for writing rich documentation. 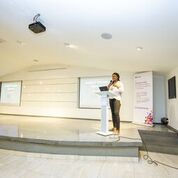 The next session was centered around “The Layers Of The Web” by Jeremy Keith. He went on to give a detailed tour of the past, present and future of working on the web—from the building blocks of HTML, CSS and JavaScript through to frameworks and libraries right up to the latest and greatest Progressive Web Apps. Then, Eli Fitch gave a talk on “Functional CSS at Scale: Clean & Composable UI on Massive Apps.” 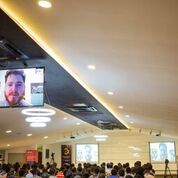 Wes Bos's session was an amazing talk on how to use “CSS Grid.” Omayeli Arenyeka gave a talk on “Finding Unavailable Data.” Christopher Schmitt’s talk was about “Image Formats & Optimization.” He explained why optimizing media for the web is good practice.

The next session was “A React Point of Vue: Common Mistakes and Pitfalls when making the Switch from React to Vue” by Divya Sasidharan. 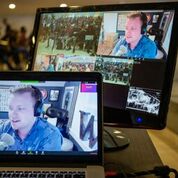 Ire Aderinokun gave a talk on “Making A11Y easy,” and Sean Larkin took the next session with a talk on "Understanding webpack Under the Hood!!” Estelle Weyl‘s session was called “Simple. Fast. Accessible.” She talked about accessibility and the importance of making the web accessible and faster by explaining the accessibility features.

Brian Holt gave a talk on “10KB or Bust: The Delicate Power of webpack and Babel.” And the last speaker for the day, Mina Markham, spoke about “Using CSS Grid Today.” Her talk featured examples of how she’s been using CSS Grid currently in production, as well as the process and challenges she faced. 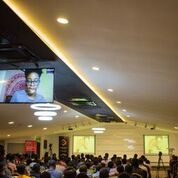 There were also breakout sessions in between talks, and it was a lot of fun and a learning experience for everyone. We had games and other exciting activities after the event. 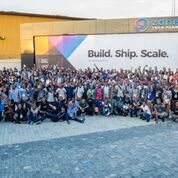 It was an amazing experience. The sessions were filled with excitement and a lot of talks and knowledge shared. One of my favorite moments was in Divya‘s talk on “A React Point of Vue,” when she gave a detailed use case of jollof rice, a Nigerian delicacy, as an illustration for her talk. Because this was a remote conference, we had a lot of engagement and participation on Twitter with #ConcatenateConf.

This conference wouldn’t have been possible without the help of the sponsors for this event like Progress. As we look forward to next year’s event, we hope to accomplish more and do better than this milestone we crossed. 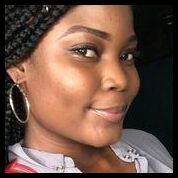 Gift Egwuenu is a software developer at Andela and a technical writer based in Lagos, Nigeria. She is passionate about the open source community and enjoys learning new technologies. Learn more about Gift at github.com/lauragift21