Yesterday we released the first of series of Service Packs, following our outstanding Q2 2010 release. The first drop is for RadControls for WinForms, and features a fair amount of bug fixes.

A noteworthy feature made it in Q2 2010 SP1 - and this is the ability to quickly switch from [now obsolete] RadPanelBar, RadTabStrip, RadComboBox, and RadListBox controls to their new counterparts: RadPageView and RadDropDownList and RadListControl. The idea is simple, and the transition process is quick, transparent and painless. Simply download and install RadControls for WinForms Q2 2010 SP1 and upgrade your application to use the latest version. Once you do this, the new version will automatically detect whether you are still using the older controls, and will add a new "Conversion Wizard" item in their smart tags. This wizard detects which of the obsolete controls you are using in your form and will list them in a listview, and depending on your choice it will covert some or all controls to their new counterparts: 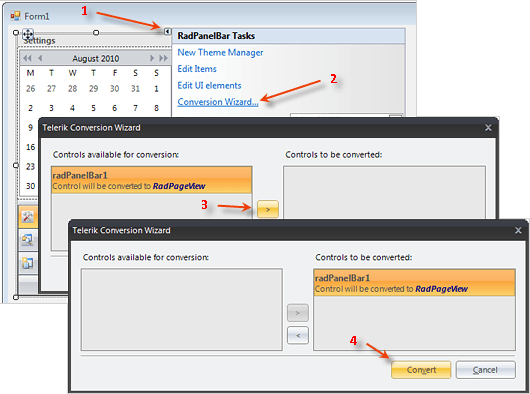 And here is a quick snapshot of the controls before the conversion (RadPanelBar in this case) and after it (RadPageView), in Office 2007 Black disguise: 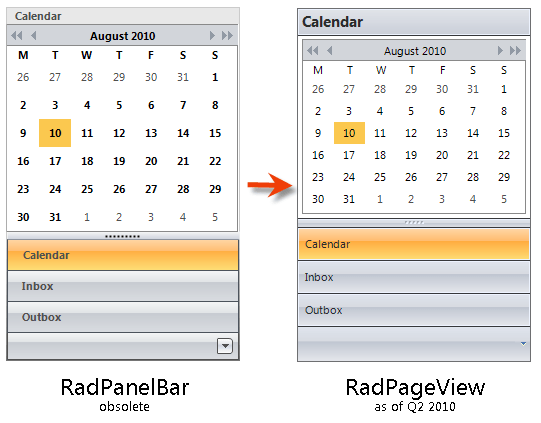 The conversion will add the needed assembly references to the bin folder automatically, will transfer most common properties from the old control to the new one, and will dispose of the old control(s). Images will need to be transferred by hand, because the new control uses resources, whereas the old one used ImageLists.

We hope the conversion wizards will help you upgrade to the latest and greatest RadControls version quickly and painlessly.