Sands of MAUI is a humble attempt to collect all the .NET MAUI awesomeness in one place. Here’s what is noteworthy for the week of October 10, 2022:

Matt Soucoup, James Montemagno and David Ortinau got together for another episode of the .NET MAUI podcast—the official podcast for all .NET MAUI aficionados. The topic of discussion was the next major version of .NET MAUI—AKA .NET MAUI for .NET 7 Release Candidate (RC) 1, and all associated news around it.

What is quite remarkable is that the tooling for .NET MAUI shipped within latest Visual Studio for both Windows and MacOS simultaneously—available in Visual Studio 2022 17.4 Preview 2. This is the first time .NET MAUI is going from a major to another major version—while there are some growing pains, the transition for .NET 6 based .NET MAUI apps to run on .NET 7 RC1 should be just the Target Framework name change.

The trio had an honest conversations about the road forward—moving libraries/NuGet packages to support the latest .NET runtimes and how to version .NET MAUI sample apps. Developers will do well tuning into the podcast for latest news and plotting ways to get on to .NET MAUI on .NET 7 RC1—the future awaits.

See how to use one of the primary tools for any app—a menu bar!

.NET MAUI Community Toolkit now includes easy Status Bar styling—developers can customize the color and style of the status bar on iOS/Android mobile apps. Status bar tweaking is implemented as a Behavior, so developers can work it through XAML/code and make things dynamic based on user actions or application status. With the latest release of the .NET MAUI Community Toolkit, developers can also display Gravatar images next to people’s info—Images can be pointed to the Toolkit’s GravatarImageSource property to pull this off with ease. The Toolkit now introduces a new FadeAnimation to provide the ability to animate the opacity of a VisualElement from its original opacity to a specified new opacity and back.

With every release, the .NET MAUI Community Toolkit adds more ammunition for .NET MAUI developers—kudos to the team and the contributing community.

Visual Studio App Center is a collection of common mobile development and cloud integration services, such as builds, CI/CD pipelines, analytics, automated UI testing and app distribution. App Center is meant for most mobile/desktop apps and has been popular among Xamarin developers, but has not had support for .NET MAUI until now—things look poised to change with a preview App Center NuGet package. Gerald Versluis had to be the first to kick the tires and produce a video on App Center for .NET MAUI apps.

Gerald started off setting the stage with some context and history around App Center. Builds for .NET MAUI are not supported in App Center yet, but analytics and crash reporting are meant to light up. Developers need to first head to the App Center portal to set up apps with named definitions and targeted platforms—this generates the unique keys for each app.

Next up is creating a .NET MAUI app, grabbing the preview App Center NuGet package and initializing the App Center SDK with requisite keys. Once the App Center hooks are set up, any defined app crashes, UI usage or custom analytics start being captured—developers have easy access to all captured data in the App Center portal.

Gerald mentioned the need for transparency with users and showcased App Center usage with some easy-to-follow demos. Hopefully, this is the start of App Center becoming the trusted provider of cloud builds, analytics and distribution tool for all .NET MAUI apps. 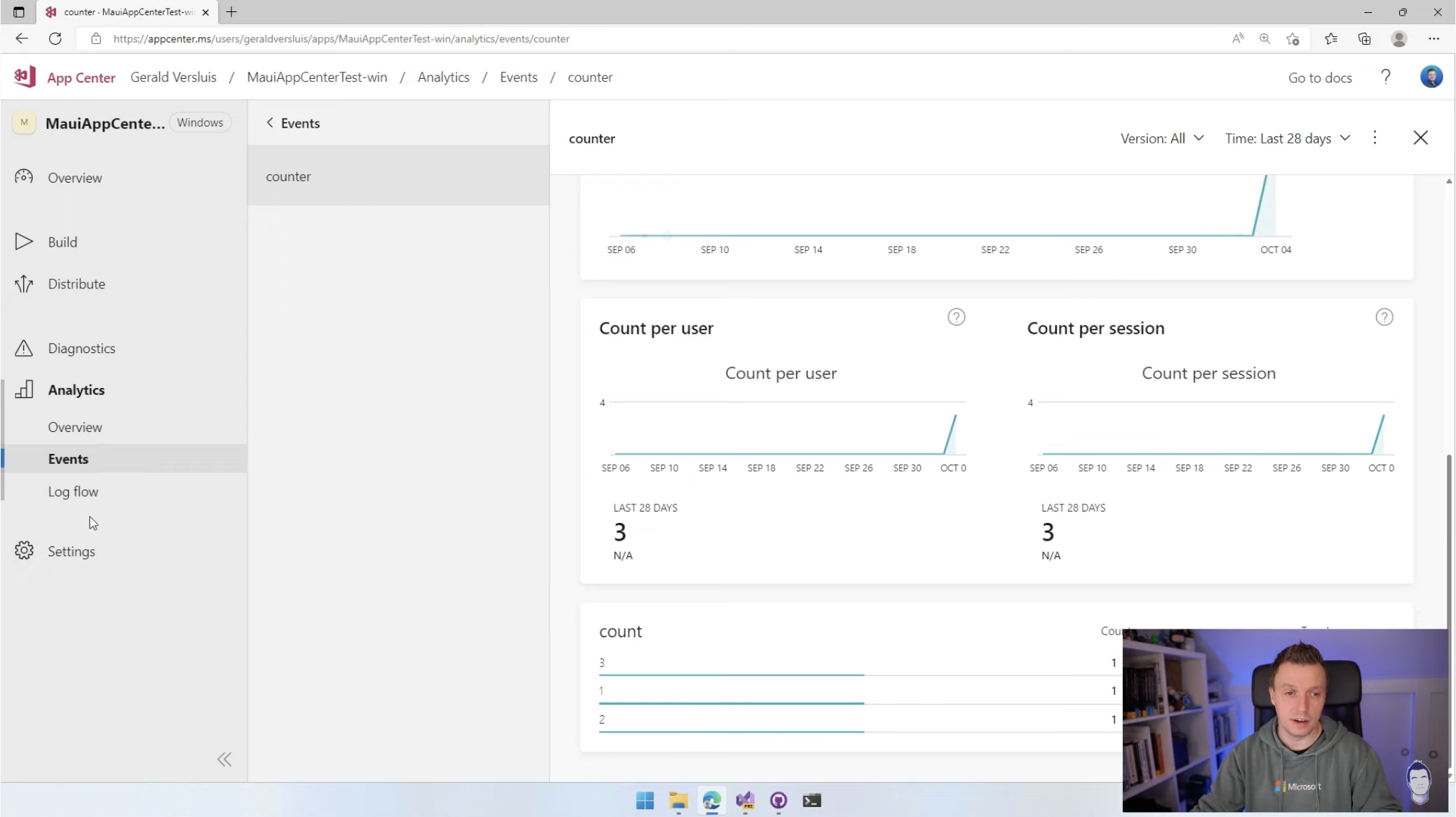 .NET 7 is the next major runtime for .NET MAUI and the recently released .NET MAUI for .NET 7 RC1 packs some exciting bits. While the focus is stability and bug fixes, there are a bunch of new features in .NET MAUI for .NET 7 RC1—while mobile developers get the Map integration, there is plenty of love for desktop developers. .NET MAUI aims to please developers looking to create better desktop experiences and the latest RC1 bits include desktop-friendly features like tooltips, pointer gestures, right-click mapping on tap gestures, and more control over the window size.

Javier Suárez produced a video on a key desktop feature—Context Menus in .NET MAUI for .NET 7 RC1. Javier started out with a sample demonstrating the new desktop context menus in a .NET MAUI app—developers can attach a context menu to any visual element. Content for context menus is driven by MenuFlyout controls, with nested child MenuFlyoutSubItem items support and functionality being completely customizable by developers. Context menus can be data bound and have Command support for developers wanting to do MVVM design pattern—Javier demonstrates all the things around context menus with ease.

While .NET MAUI may have started with mobile-first mindset, desktop support is a first-class citizen and .NET MAUI is powering the next generations of enterprise desktop apps, that just happen to be nicely cross-platform. 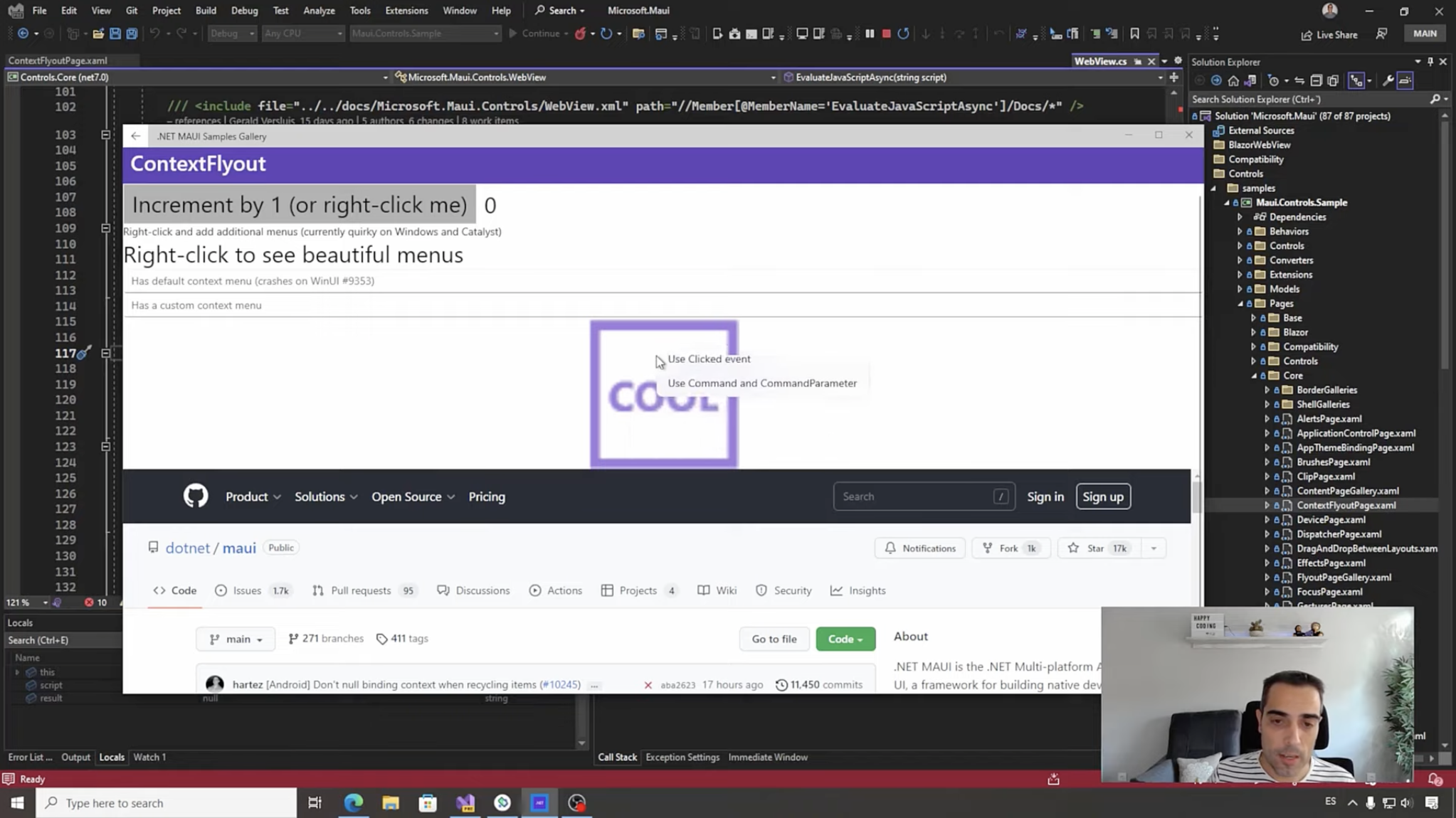 .NET MAUI opens the funnel to invite various ways developers can define app UI and the visual tree—but the predominant way remains XAML. For folks coming in new to the .NET MAUI ecosystem, XAML may be an unknown skill—but there is plenty of help to learn. If developers can spare an hour, Microsoft Learn has a module to learn how to create UI with XAML—part of the learning path on building mobile/desktop apps with .NET MAUI.

The Learn module begins with a gentle introduction to XAML and talks through benefits of declarative visual tree definitions. The course then moves into more real-world topics like Types, Properties, Data Binding, Events and more—developers can follow along as they learn to tinker with XAML. For those willing to explore the power of XAML, the course takes developers through advanced topics like Extensions and Behaviors—all within an hour’s worth of learning a new skill. What’s stopping you? 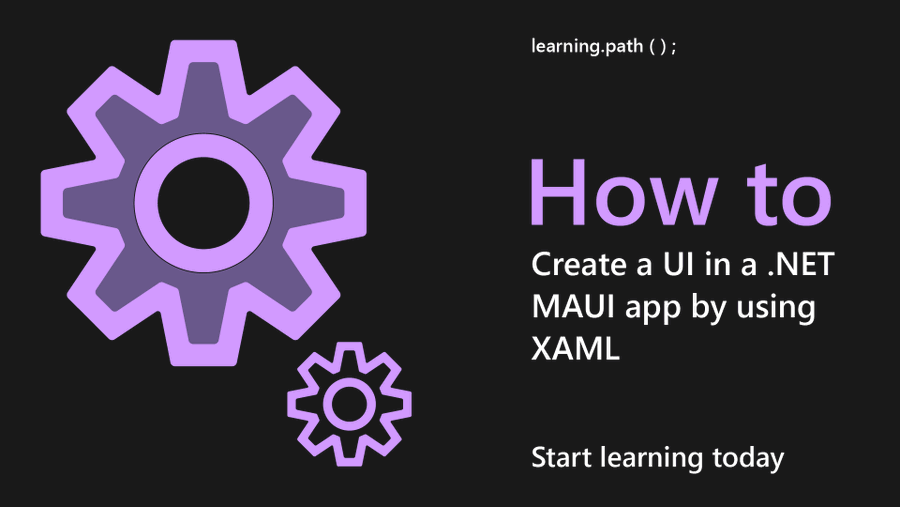