Many days passed since my last post (which is rather interesting and concerns the MS Surface technologies) but now I have the opportunity to justify why: Beta release of RadControls for WinForms Q2 2007 was on the way!

We introduced only one new component – the RadCalendar for WinForms, but please do not underestimate the release: all our components contain very serious improvements like RTL language support, hierarchy support, documentation and so on. Let me draw some aces on the table:

Major Redesign of Our QuickStart Framework: 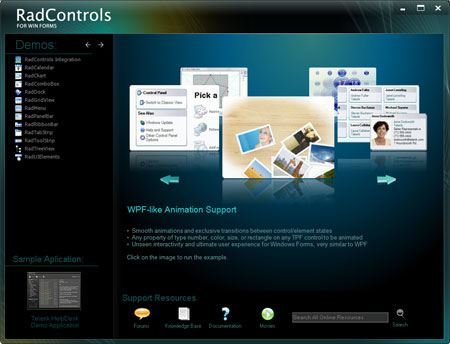 Yes, it is more beautiful and has greater usability than ever! It has been completely redesigned to offer the latest visuals, following the recent Vista craze. And I like it for sure.

At the bottom left end of the you will notice a sneak peak of our future Rotator component. it rotates previews of our sample applications that we will provide with our release. When you click on the preview you will be redirected to the Open Source Projects page where you can download the applications.

While having the good old at the left-hand side, the biggest addition to the application is the Carousel control that exposes all “must see” examples for every product category. While it is not “filled up” for the BETA ), it will be ready for the final release.

The Carousel component is inspired from similar WPF and supports animation and transition effects to display our featured examples. It is built on top of  Telerik Presentation Framework (TPF) and showcases the magnitude that can be achieved with GDI+ and Telerik Windows Forms.

Speaking of “featured examples” one thing you MUST see is our Photo Album example, which emulates Surface computing experience. I must admit that creating the Photo Album would be a developer’s nightmare without using TPF, which makes development much easier and fun! Enjoy the benefits of using our TPF technology! 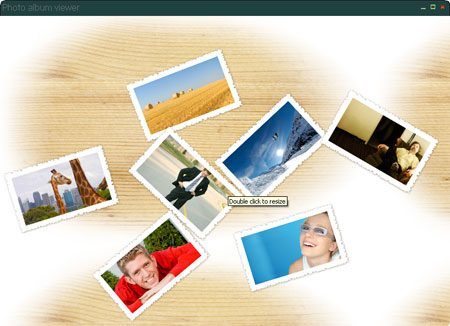 There are a lot more things to say about this BETA like the calendar control, the hierarchy supported now in RadGridView, the RTL support of calendar and , the blazing performance of loading nodes in RadTreeview, but it will be a matter of a whole separate post about our new components and features and the value they provide.

So have fun and give the new RadControls for WinForms BETA a spin. We need your feedback!