In this article we'll measure the performance of an example React app with both the Profiler tab in React DevTools, and the Profiler component.

You’ve just created a brand new React app, but you want to understand its performance characteristics before shipping it to your customers. While you can use the browser’s User Timing API to measure the rendering times of your components, there’s a better alternative created by the React team: the Profiler API, and a Profiler tab in React DevTools.

The Profiler API is the recommended way of measuring the rendering times of our components, because it’s fully compatible with features such as time-slicing and Suspense.

In this article we’ll measure the performance of an example React app with both the Profiler tab in React DevTools, and the Profiler component.

If we are working on our React app in development mode, we can use the Profiler tab in React DevTools to record parts of its execution, and then analyze all the updates that React made. (If we want to use the Profiler tab on a production app, we need to make some changes to our config.)

To profile our app, we just need to switch to the Profiler tab, and press the Record button to start profiling:

We’ll then perform actions on our app, and press the Record button again to stop profiling. The DevTools will show us each of the updates that happened while we were recording, using a fancy flame chart:

If you are not familiar with this way of representing performance data, you may be wondering what all these colored bars mean. Let’s break it down.

Every time any of our components render, React compares the resulting tree of components with the current one. If there are changes, React will take care of applying them to the DOM in a phase called commit.

The colored bars we’re seeing at the top are commits that happened while we were recording. The yellow/orange bars are the ones with higher rendering times, so we should probably pay extra attention to them:

If we click on one of those commits, the flame chart below will be updated, showing the components that changed in that commit as horizontal bars. The longer the bar, the more time it took for that component to render:

Another cool thing we can do here is click on the bar for a certain component. Not only will the flame chart focus on the selected component, but the pane on the right will also show us how many times it has rendered for the lifetime of the app: 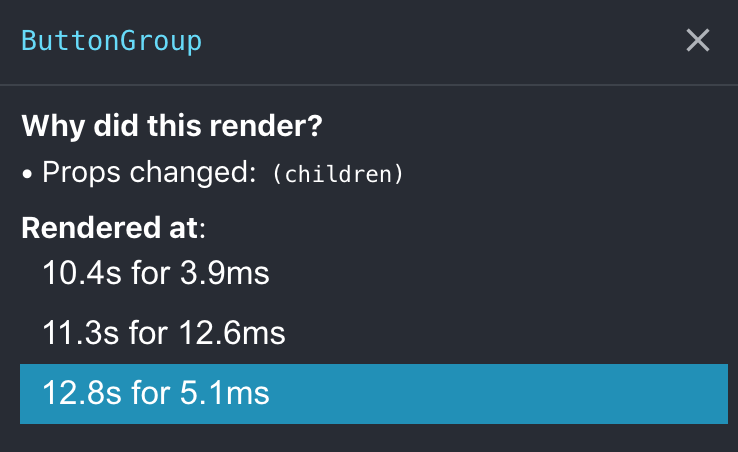 The Profiler tab in React DevTools is a great way of inspecting how our app is performing without needing to change our code. Just by recording key interactions, we’ll be able to know where rendering time is going, and identify bottlenecks that make our app sluggish.

If we want to have programmatic access to the performance measurements of a specific component, we can use the Profiler component. It wraps part or all of our app tree, and gives us metrics on how long it took for that tree to render.

The first thing we have to do to use the Profiler component is to import it:

The Profiler component can then be used to wrap any part of our tree of components:

When CustomStockChart renders, the Profiler's onRender callback will be invoked with a bunch of useful information. In our example, it’ll print something like this to the console:

The meaning of each of these arguments is explained in the documentation for the Profiler API. In the real world, instead of logging them to the console, you would probably be sending them to your backend in order to get useful aggregate charts.

Anyways, be sure to spend time understanding these two new tools in your arsenal, as they’ll prove invaluable when trying to identify performance issues in your React apps!