Getting Started with the Web Report Designer in .NET

In the second post of this series, we review the new Web Report Designer and how to use it in ASP.NET. See the first post here.

Get a Quick Guide to
.NET Reporting Tools

Learn how to apply the top 6 criteria when assessing a reporting tool.
Get our free guide today!

Telerik Reporting is a powerful reporting engine built on .NET with lots of great benefits. One of these benefits is the Report Designers. From developers to report designers and stakeholders, Telerik Reporting is the tooling of choice for creating and designing beautiful reports. As a result, I have created this series to illustrate this.

This series covers a little of the past, a little of the present, and, most importantly, future opportunities. The later posts will be more technical, so you can skip ahead using the links below or read along at your leisure.

Well-designed reports are just like any other piece of media. There is an abstract art to creating them and reading them. Think about it, reports answer questions, communicate objectives and evoke good and bad feelings.

I mean, it is not a Picasso or a Rembrandt. However, the person or people that thought through the complexities of the data and organized it in such a way to communicate good and bad information worked through a similar process as those well-renowned artists.

Designing reports is an integral step in delivering reports to stakeholders. One could argue that the designer capabilities are the most important aspects of a reporting framework. This idea holds true for Telerik Reporting as well.

Report Designers expect a reporting framework to be easy-to-use and understand. They expect that it is powerful enough to present their ideas as intended. From data inputs to end-user activity, a reporting solution needs to be capable of working within the design intent.

The Report Lifecycle in Telerik Reporting is composed of three steps. These are defining the report, processing the report and then rendering the report. The steps are sequential and build each other one after the other. To make changes in either step requires starting the lifecycle again. Let me provide an overview of the steps below.

An important consideration at the rendering stage is that each renderer has its own capabilities. For example, paging happens during the rendering stage because it is the only place we can know if paging is needed. To elaborate, a PDF render requires paged format and CSV or XLSX renders do not.

Ultimately, designing a report is the first step in the process. Each of the Telerik Report Designers fit into the First Stage of the Lifecycle. Understanding this Lifecycle provides a solid foundation for designing Reports in Telerik Reporting.

Because the Web Report Designer is a web application there are some slight differences when using it compared to the Desktop Designers. However, the designer elements and methodologies are very similar. Additionally, the most used components are available but because the Web Designer is in active development some are still missing.

The conceptual elements of Telerik Report Designers tools enable simple and visual design. To achieve this report designers can use the drag-and-drop, contextual feedback, wizards, and What-You-See-Is-What-You-Get concepts.

Drag and Drop is a common concept in design that is used in many designer tools. It enables the designer to select the tool or design element, drag it onto the design surface and edit the tool. This is ubiquitous with other concepts like snap to grid as well.

For contextual feedback, the UI will update upon selection of a specific element in the designer. For example, a TextBox has different properties than a DataSource and the properties window will update to accommodate these differences.

To ease of creating complex reports, the designer tools include wizards. The most complex report items like the Graph, the various Data Sources, and Tables/Crosstabs can be created much more simply using the wizards. Wizards are commonly used for complex tasks.

The above concepts compliment the designer's workflow by displaying what the component exactly how it will look like in the report. This is known as What-You-See-Is-What-You-Get. In Telerik Reporting, it provides a live preview of image-based items like the Graph, Map, Barcode and PictureBox. It is very common with complex designers.

The Web Report Designer elements are nearly identical to the desktop designer except for some being named differently. These include the Design Surface, Report Components, Report Explorer, and the Properties Area.

The central element in any designer is the design surface. This is where the components are placed and the What-You-See-Is-What-You-Get appears. This is highlighted in the below screenshot. 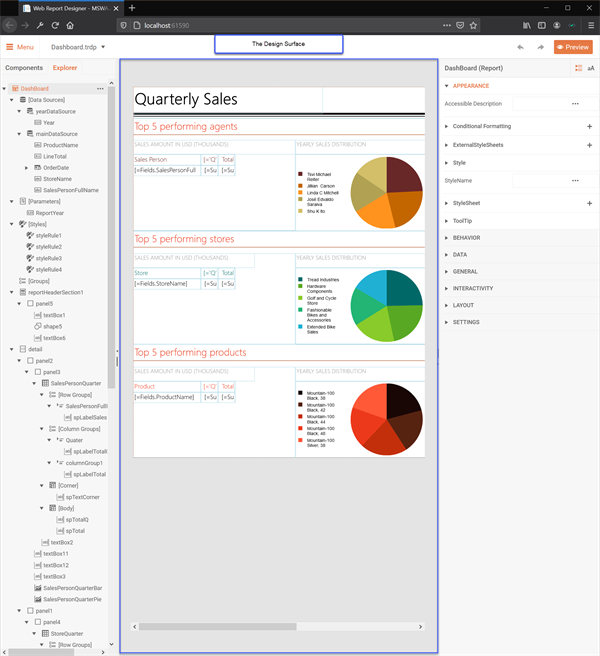 Reporting Components are found in the Components Tab to the left of the design surface as shown in the next illustration. This is where a designer selects an item to add to the report. It can be viewed as a List or a Grid. 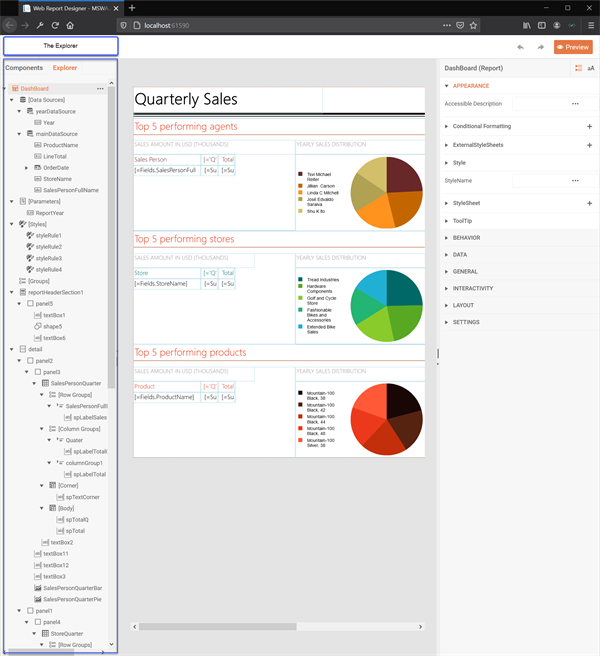 The Properties Area is the element that provides the most contextual feedback. It will update as items are selected in the Report. This is because of the many property variations in the Report Components. The following screenshot illustrates the properties area with a TextBox selected. 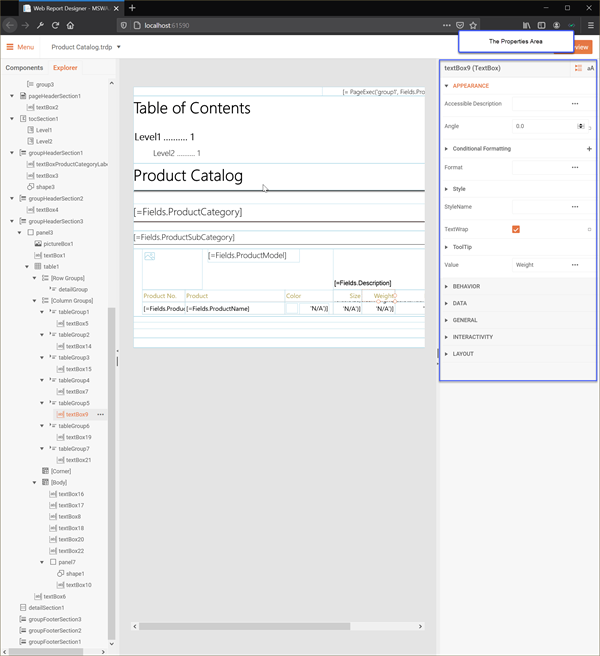 Like most software, there needs to be a way to manage files. The File Menu is used to create and save definition files. Additionally, workspace preferences can be set. This is like the File Menu in the Standalone Report Designer. 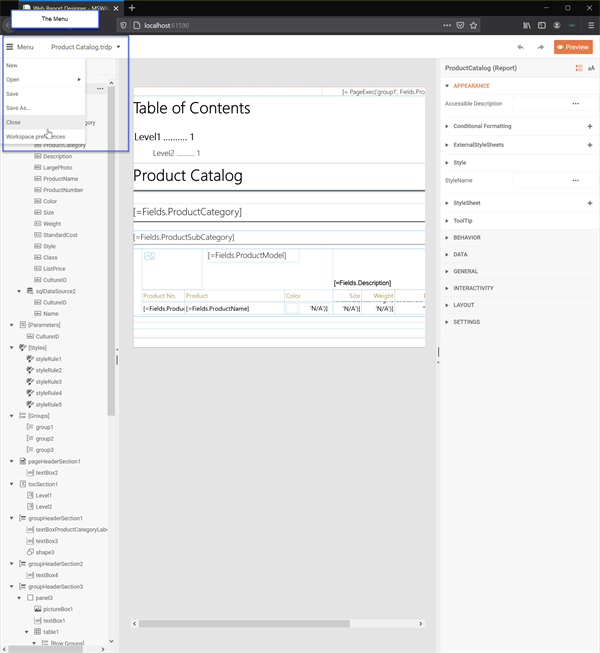 It is widely-known that desktop applications provide a different user-experience than a web application. The same goes for the Web Report Designer. Those familiar with our desktop designers will notice some subtleties between the designers.

The Web Report Designer includes the most widely used components. These include the Report Items, Data Items, Report Components (SubReport), Maps, as well as Graphs and Data Sources. Unfortunately, there are so many only a working sample with demos can sufficiently illustrate this.

Now that the methodologies, UI elements and available features are known, it is important to know how to implement the Web Report Designer into an application. We will review that next.

The Web Report Designer is a pure HTML5/CSS3/JS jQuery widget. It uses a dedicated REST Service as a backend. As of this writing, it works with the ASP.NET Core and WebApi 2 flavors. In this section, we will review the requirements and implementation for both.

To follow along, a free sample is available for this blog post on GitHub. It includes our public demos which are used to illustrate setting up the Web Report Designer in an application.

The Web Designer widget works in a client-server architecture. As usual, the widget is the client, and the REST Service is the server. Those that have used our HTML5-based report viewers will be familiar with this architecture.

In the following sections we will review the client implementations and then the server implementations. Before that I will provide some important prerequisites when I create a sample.

Generally, I create an empty ASP.NET Core or ASP.NET MVC Application with some small changes to the steps in our documentation. Let me go over them below.

The process for setting up the designer in an ASP.NET Core application is described in our How-To article. Below is a basic example of what that would look like.

It is important to note that above ASP.NET Core report designer client could also use a plain HTML/CSS/JS page which is illustrated in the documentation article. However, the previous code snippets can also be used in the ASP.NET MVC implementation.

For full details on using ASP.NET MVC, see How to setup the WebReportDesigner in ASP.NET MVC application which also shows a slightly different approach than the code snippets below.

The major difference between the ASP.NET Core and the ASP.NET MVC implementations are the framework capabilities. Mainly, ASP.NET Core includes Dependency Injection and MVC does not. Other than that, the configuration will be nearly identical.

ASP.NET Core uses a Startup class to configure its applications. The Web Report Designer in ASP.NET Core is also configured here as well. The configuration will include a section for the ReportingService and the WebReportDesignerService as shown in the following code snippet.

ASP.NET Core's Dependency Injection makes the controller implementation simple as shown in the below code snippet.

ASP.NET MVC configuration will need to be in the constructor of the controller. This is also exactly like the MVC Report Viewer implementations as well. Furthermore, it will also include both the ReportService and ReportDesignerService configurations.

Complexities with the Web Report Designer

The Web Report Designer delivers powerful report design capabilities at near feature parity to our desktop designers. However, since this is delivered over the web some features will be more complex. These include handling databases and report file management.

Out-of-the-box the Web Report Designer uses the FileDefinitionStorage implementation which enables managing files using the file system. A bonus is that all the Storage API methods are virtual and can be overridden and modified. These virtual methods enable implementing Custom Report Definition Storage.

I hope that you enjoyed a more detailed review of the Web Report Designer. I intended for this post to be more technical in nature. In the next post, I will include more technical information for the desktop designers and walk through building a report. I imagine there will be some overlap. 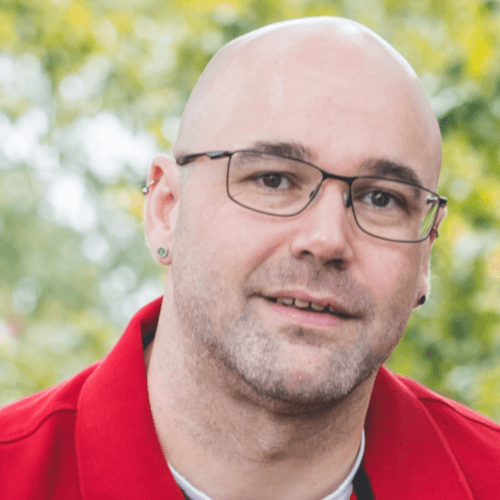 Eric is a Technical Support Engineer at Progress. He covers all Telerik DevCraft products, specializing in .NET tools like UI for Blazor, AJAX, Telerik Reporting and Fiddler.

Telerik Reporting Conquers Gaming: Use Our Product in One of Many Extraordinary Ways