Dependency injection (DI) has been possible in previous versions of MVC. With each new version DI has been easier to implement and, with MVC6, DI is supplied right out of the box. In this article we'll look at how the new DI implementation works, what are its weaknesses and how we can replace it with our favorite DI framework.

The unification of APIs across ASP.NET is a common theme throughout ASP.NET 5, and dependency injection is no different. The new ASP.NET stack including: MVC, SignalR and Web API, etc. rely on a built-in minimalistic DI container. The core features of the DI container have been abstracted out to the IServiceProvider interface and are available throughout the stack. Because the IServiceProvider is the same across all components of the ASP.NET framework a single dependency can be resolved from any part of the application.

Let's walk through setting up DI in a MVC application. To demonstrate the basics, we'll resolve the dependency for the service used to get project data. We don't need to know anything about the service other than that it implements the IProjectService interface, an interface custom to our demo project. IProjectService has one method, GetOrganization(), that method retrieves an organization and its corresponding list of projects.

We'll use the IProjectService to get the organization data and display it in a view. Let's start by setting up the controller where the service will be used. We'll use constructor injection by creating a new constructor method for our controller that accepts an IProjectService. Next, the Index action will call GetOrganization, sending the data to the view to be rendered.

If we try to run the application at this point we'll receive an exception because we haven't yet added a concrete implementation of our IProjectService to the DI container.

The exception message shows that the code fails during a call to ActivatorUtilities.GetService. This is valuable information because it shows that in MVC6 the DI container is already involved in the controller's construction. Now we just need to tell the container how to resolve the dependency.

In order to resolve the dependency, we need a concrete implementation of IProjectService. We'll add a DemoService class and, for simplicity, it will use static dummy data.

Finally, we'll instruct the DI container to instantiate a new DemoService whenever IProjectService is required. To configure the container we'll modify the ConfigureServices method in Startup.cs. Our configuration will be added to the end of this method.

The service is added by using the AddTransient extension method on the services collection, and setting the IProjectService as the type of service and the DemoService as the implementation.

With the service added, DemoService will now be instantiated when the controller is created, and the exception will no longer be thrown. 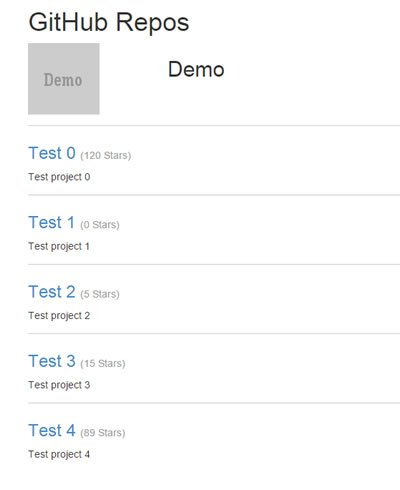 Having a baked in DI layer throughout the ASP.NET stack is helpful, but you should temper your expectations. While it is useful for simple scenarios, it is very limited. The default container only supports constructor injection and it can only resolve types with one, and only one, public constructor. There's no need to worry though, you have complete control over the DI container and it's easy to replace with your favorite DI solution.

Setting up a replacement DI container does not require a lot of code, but the process could be more discoverable. We'll continue with our previous example to show exactly where the extensibility point is.

The method we are using, ConfigureServices, is actually one of two delegates the application will use to register the DI container and its services. The first, and default, delegate is an Action<IServiceCollection>, which was used in the previous example to resolve our DemoService. The second is a Func<IServiceCollection, IServiceProvider>, which is used to replace the default container by returning a custom implementation IServiceProvider.

The application will still build and run just as it did before, except now we've exposed the extensibility point we need.

Next, we need to add a third party DI container. There are a variety of DI containers to choose from, all with their own strengths and weaknesses. For this example we'll be using Autofac. At the time of writing, Autofac has a DNX compatible alpha version we can use.

In the Startup.cs, we'll modify the ConfigureServices method again. This time, we'll add our dependencies to Autofac and resolve the container back to an IServiceProvider replacing the default container.

Now our application is using the Autofac container in place of the default container. We can fully take advantage of Autofac's features and, because ASP.NET was developed against the IServiceProvider, we wont need to change any other code in our project.

Let's make one final change to the example by swapping our DemoService to another implementation that uses GitHub's REST API to populate our project list. The GitHubService implements the same IProjectService as DemoService, however it takes a name parameter in its constructor. Using Autofac we can set the Name value of the constructor in the configuration.

Restarting the application reveals that our new GitHubService was successfully resolved without touching our controller code. 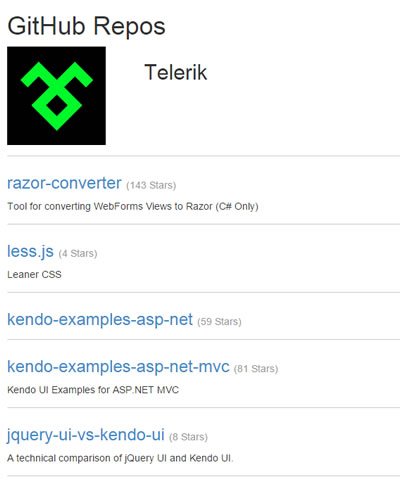 The new ASP.NET provides out-of-the-box DI throughout the stack. The new DI container is basic enough to get the job done, but lacks robust configurations. The container is easy enough to replace if you know were to look, allowing you to use fully-featured, third party tools. The source code for both the framework and the examples for this project can be found out GitHub.