The New Feedback Portals for Kendo UI are Here!

We're excited to debut new feedback portals across all flavors of Kendo UI, making it easier for you to submit and track your feedback. Let us know what you think!

Making sure that users have their voices heard is the top priority on the Kendo UI team. Most of the new components and features that are included in a release stems from the feedback that we have received over the years. This ends up being even more important for some of the new flavors with native components being built for Angular and React.

As a part of a re-evaluation for how we work with feedback and our own internal systems we realized that there were a few drawbacks from the solution that we had implemented in the past for Kendo UI. While the system itself was fine, there were a lot of items in the background (and some use-cases coming from our users) that caused us to look elsewhere for a feedback portal solution.

This is why I wanted to introduce the brand new feedback portals for all flavors of Kendo UI, including our UI for ASP.NET MVC, UI for ASP.NET Core, UI for JSP, and UI for PHP server-side libraries! 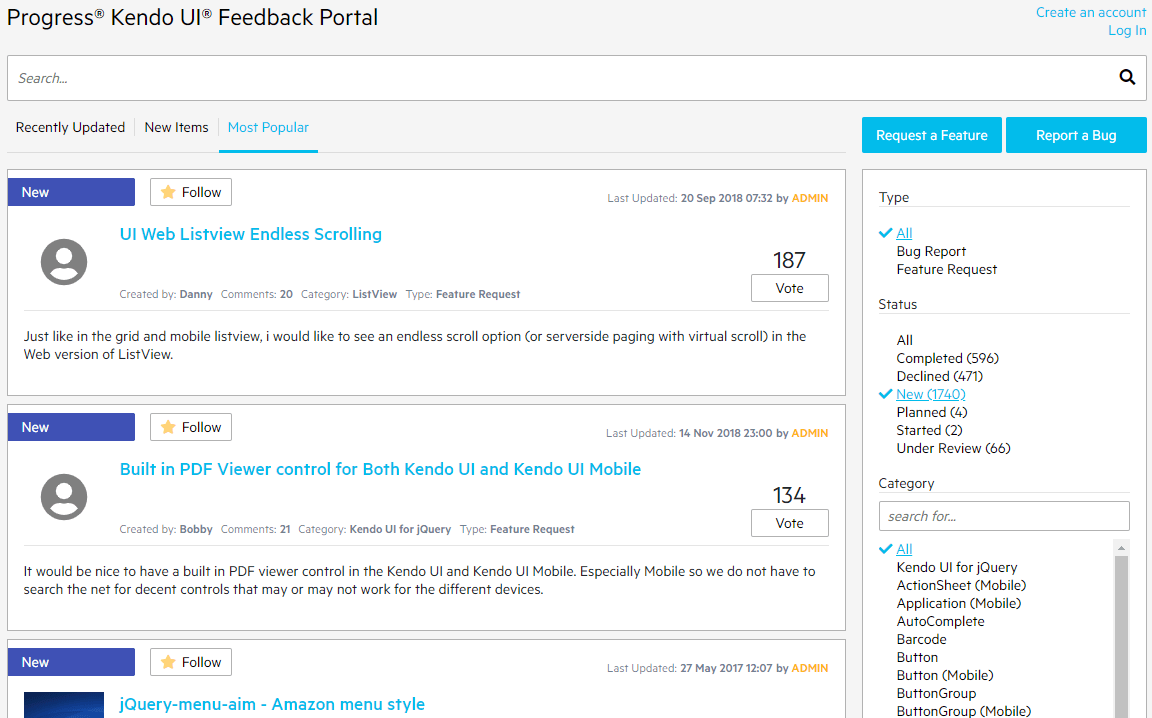 Why a New Portal?

Without getting in to too many nitty gritty details, we realized that there were some limitations with the previous solution that we used. While not necessarily a weakness of the portal itself, there were some workflows that we weren't 100% happy with and wanted to transition over to something new.

We primarily wanted to make sure that everyone's voice was heard, and the previous portal had some quirks around voting, like people running out of votes or some stacking of votes in order to push up an item with some extra votes. Additionally, we wanted some deeper integrations with our own systems in order to better track and organize these items without duplication or awkward workflows. Beyond this we also wanted to align with the rest of the feedback portals that we offer across all UI component libraries, which since 2010 has not been the case. Now we have the same type of feedback portal across all products!

As an added bonus, this solution was built in-house here at Progress which ensures that any feedback that we get on the actual portal itself can be tweaked an updated by us! Continuous improvement everywhere!

The ultimate goal of this feedback portal is to make the communication between the Kendo UI product teams and the developers that use our UI components in their day-to-day that much more efficient. This opens up an even easier path for two-way communication which is always critical when building something that truly prospers when feedback is gathered and used to drive the road map.

How to Use the New Portal

The new portal should be fairly straightforward, but there are a couple of things to look out for.

First and foremost, you need to have a Telerik.com account. Previously we had separate accounts across our support system and the feedback portal, but now we have everything under one single account. Makes it a lot easier for you to track what you've submitted yourself, plus it's one less account for you to keep track of. It also eliminates a lot of the anonymous comments and voting that existed in the old system, ensuring that folks using (or looking to use) Kendo UI are the ones commenting and voting.

This works for both trial and licensed users by the way, so even if you're just trying out any of the Kendo UI products you can submit feedback and let us know what you think!

This will take you through a process very similar to submitting a support ticket. We will try to assist you with potential documentation, forum, or demo examples of what you're trying to do just in case we might have the feature already. If you can't find it through these resources you can just continue to submit your piece of feedback using the prompts that we guide you through.

If you're interested in a piece of feedback that already exist then you can of course vote for it and/or subscribe to the piece of feedback! Subscribing to it will ensure that you get email updates whenever the status of said item is updated, or if we (the Kendo UI teams) add any comments.

We also have separate portals for all of the different flavors of Kendo UI, including the server-side UI components. This makes it a bit easier for you as a user to keep things organized, and reduces some of the noise of what is available within each of the portals.

The interface should be pretty easy to navigate through, but if anything is awkward you can always submit a new feature request on the portal itself!

A Couple of Things to Look Out For

When migrating from the old system over to the new, we did use the list of current users and map them to Telerik.com accounts, which means that if you did not have a Telerik.com account previously and had something submitted you should sign up and subscribe to said items.

As a part of this migration we could not migrate the subscriptions of items over to the new system. This was due to a little bit of a mix between privacy concerns and data available, so if there are particular items that you are interested in please take the time to go through and subscribe to them now.

Another thing we tried to eliminate is the multiple votes that were cast on certain items. We used to have 10 total votes per account that could be spread across votes of 1, 2, or 3 per item. As an attempt for us to eliminate some of this we decided to keep votes down to a single vote per item, but you can vote as often as you'd like across other items! This also means that some of the numbers may have changed, but overall the popularity of these pieces of feedback have remained the same in relation to each other (more or less).

Links to All Portals

Let Us Know What You Think!

We are of course very excited about releasing this out in to the wild, but we also want to know what you think! If you have any feedback around these new portals, positive or negative, you can feel free to reach out either via the comment section below, or through social channels or even support tickets! Point is: feedback is always welcome, even if its on the feedback portal itself!