Sands of MAUI is a humble attempt to collect all the .NET MAUI awesomeness in one place. Here’s what is noteworthy for the week of September 6, 2022:

Maddy started off the show, surrounded by packing boxes from her new home—and covered a variety of content pieces from the developer community. David talked about exciting UI components/libraries for .NET MAUI developers, before diving into Maps—yes, real platform-driven maps for .NET MAUI apps.

Shane pointed out why developers should not always be using OnAppearing() for wiring things up like in Xamarin.Forms—.NET MAUI now exposes plenty more contextual events like Loaded, Unloaded and OnNavigatedTo across page/window lifecycles. 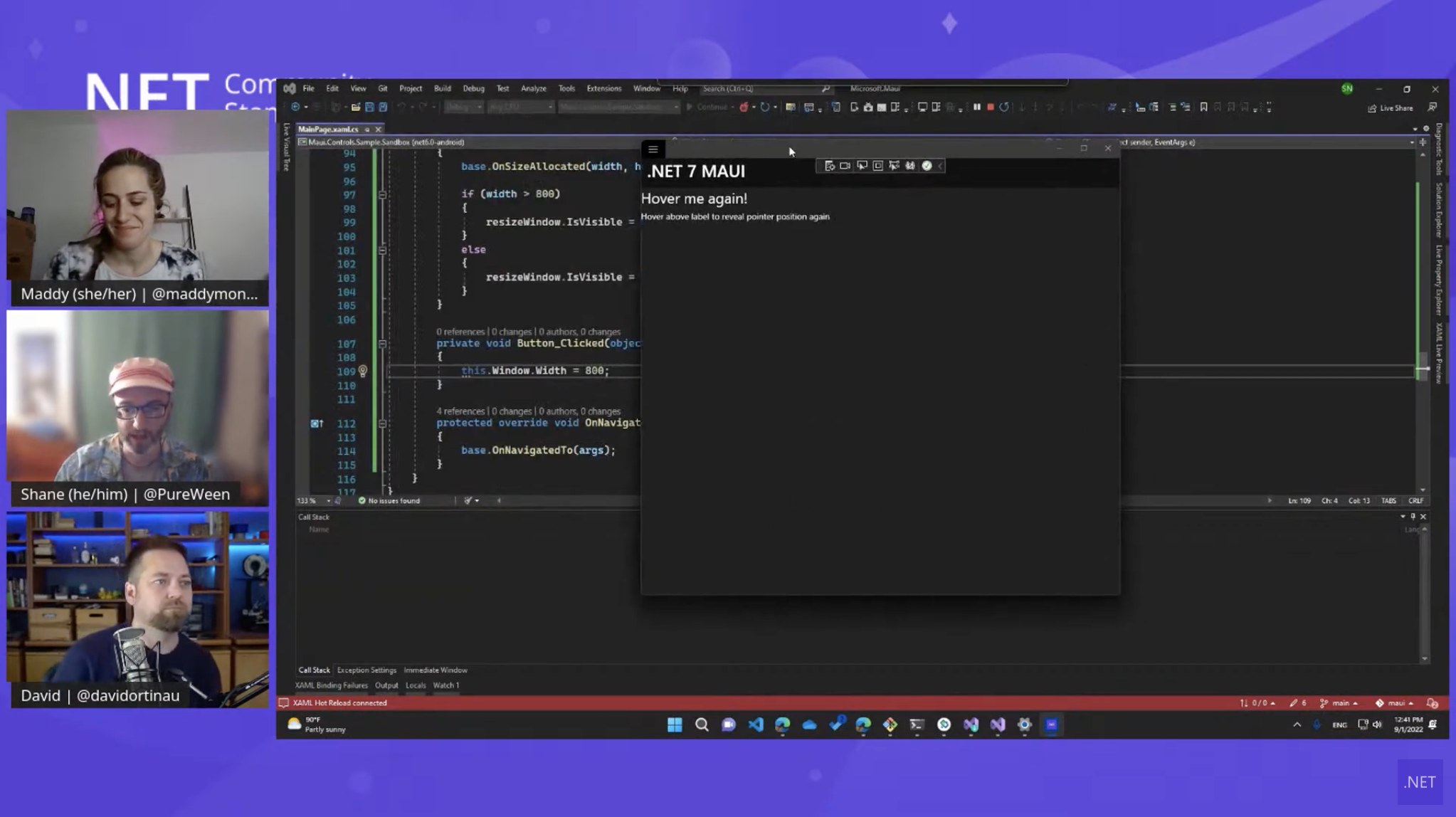 One of the most highly awaited functionality in .NET MAUI is almost reaching prime time—yes, Maps! Mobile and desktop developers often have the need to integrate maps into applications—high fidelity platform-native maps are invaluable to any apps needing geolocation support. Mapping UI has just seen its first merge into .NET MAUI repositories—and Gerald Versluis has already produced a video providing a first look at Maps in .NET MAUI.

Mapping in .NET MAUI needs to done right—Apple Maps on iOS apps and Google Maps on Android. And maps need to support a variety of features like displaying pins, adding polygons, showing traffic or handling multiple layers. The mapping solution for .NET MAUI will come with .NET 7, but early previews are out and Gerald started off showing integration through the NuGet packages.

Developers need to add permissions/API keys in AndroidManifest.xml for Android or Info.plist for iOS, and use an extension method at startup—voila, maps are now ready to dropped into .NET MAUI views. Gerald then pulled up high-fidelity maps on iOS, pinpoint user location, draw polygons and drop pins on the map.

There are variety of events bubbled up by the maps, and Hot Reload works already. While work on .NET MAUI Maps will be ongoing till .NET 7, Gerald did show off a trick where anyone can grab the NuGet packages off of the .NET MAUI build pipeline artifacts—time to light up apps with maps. 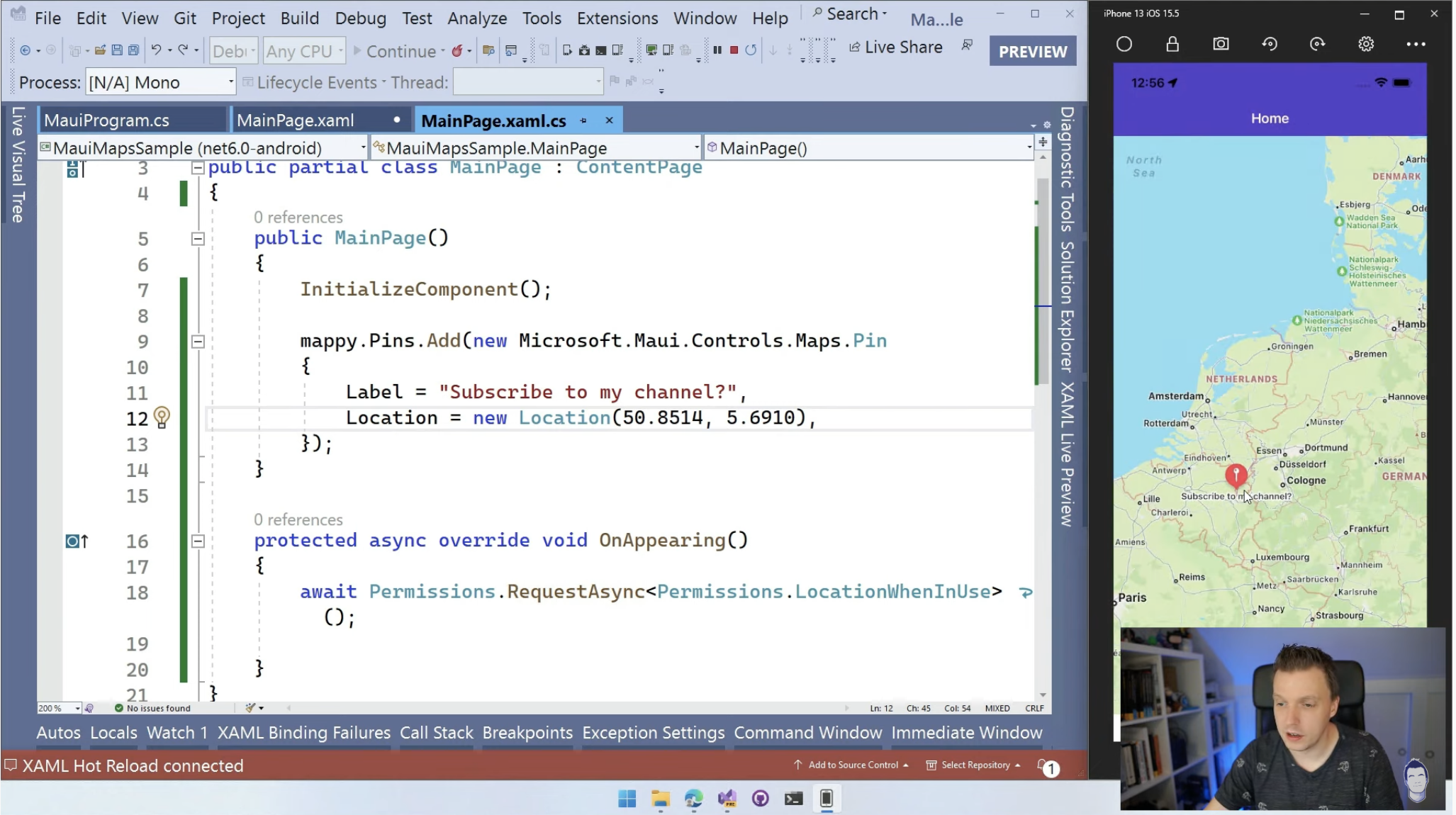 Desktop support in .NET MAUI apps is a first-class citizen—your cross-platform app is meant to run on Windows and MacOS seamlessly. Desktop app users, however, have a different set of UX and navigation expectations. One common paradigm is the ubiquitous Menu Bar and its child elements—providing a well understood design pattern of content organization/navigation. Menu Bars are fully supported in .NET MAUI for Windows/MacOS, and Leomaris Reyes wrote up an article on how developers can work with Menu Bars in .NET MAUI.

Leomaris started out by breaking down the visual hierarchy of a Menu Bar—developers are free to add as many or as little items needed at every level of a Menu Bar. As expected in a classic desktop app, a Menu Bar is made up of child elements in a hierarchy, namely MenuBarItem, MenuFlyoutSubItem and MenuFlyoutItem—each with its own set of properties. User actions on Menu Bar items can be easily acted upon using Commands/Event Handlers and the Menu Bar items themselves can be data bound for dynamic generation. In all, Menu Bars remain an iconic desktop paradigm and .NET MAUI is fully committed to supporting Menu Bars, while keeping APIs flexible for developers.

The .NET MAUI Cloud Skills Challenge is a fun and exciting way to learn .NET MAUI—developers get hands-on experience building mobile/desktop apps with .NET MAUI and earn some awesome stickers. Developer interest has been high, and so far over 400 people have joined the learning challenge. Matt Soucoup wrote up a post extending the .NET MAUI Cloud Skills Challenge—folks now have till September 30 to finish the challenge.

What can developers expect from .NET MAUI Cloud Skills Challenge—seven extensive training modules. Developers get the end-to-end .NET MAUI experience—creating the first app, building UI, app navigation, local data storage, APIs and interacting with web services. Developers can register today, track their progress across the training modules and get some sweet stickers when done. Further, James Montemagno and Matt Soucoup are plotting a seven-part Learn Live series starting September 7, where they’ll cover each of the training modules in depth—tune in developers.

DevReach has been the premier developer conference in Eastern Europe for over a decade now. DevReach is back on for 2022 as a part of Progress360 in post-pandemic mode with both in-person and online experiences—and for the first time, coming stateside to Boston, Mass. Developers can expect three days of immersive content from industry experts on all things .NET, JavaScript, design, accessibility and more.

What’s in it for .NET MAUI developers at DevReach? Glad you asked—how about the most passionate bunch of folks directly involved with .NET MAUI? DevReach speakers include David Ortinau, Maddy Montaquila, Rachel Kang, Sweekriti Satpathy and many more awesome folks from the greater .NET ecosystem. September is beautiful on Boston waterfront and DevReach promises amazing content—come hang with us.

Catch Up With Telerik UI for .NET MAUI in 5 Minutes and 15 Pictures