Recently, we hosted a webinar that highlighted the latest features in the R3 2018 release of Kendo UI. This blog post provides a summary of the webinar and answers a few of the questions that were asked.

The R3 2018 release of Kendo UI is packed with exciting new features and improvements. Please download the latest changes if you haven’t done so already. You’ll love what we’ve built! In case you missed it, here’s a summary of the top highlights that we covered during the webinar: 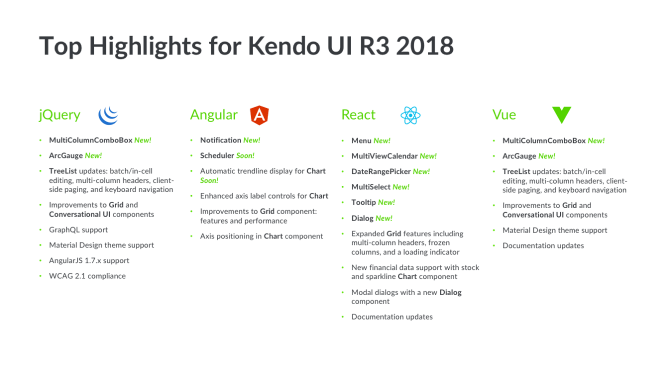 As always, you can read an overview of the latest changes in the article, What’s New for Kendo UI.

The webinar was hosted by Alyssa Nicoll, Carl Bergenhem, and me. Don’t worry if you didn’t get a chance to watch it live. We’ve posted it to our YouTube channel. In fact, you can watch it now!

During the webinar, we asked attendees to ask questions and offered the Bose QuietComfort 35 II as a prize for the best one. The winner is Beau Tschirhart. Congratulations and thanks for your great questions!

We answered a number of questions during the webinar as well as on Twitter through the hashtag, #HeyKendoUI. Here’s a sampling of the questions we received along with their answers:

We’re using the (older) RadGrid controls. Is there anything that Kendo UI can’t do compared to these components that would prevent us from updating?
The RadGrid for ASP.NET AJAX is pretty mature, so it depends on which Grid from Kendo UI you’re reviewing. Most of the pre-existing functionality is available in Kendo UI. However, there could be a feature (here or there) that isn’t available yet. If you want to chat about this potential migration, please feel free to reach out to Carl Bergenhem (PM for Kendo UI) directly: carl.bergenhem@progress.com.

Can we plug the new Kendo UI stuff in beside our (old) Rad stuff without breaking anything?
There won’t be any namespace conflicts or anything like that. You could add them in without any errors being thrown. 😀

Do the performance improvements target IE11?
Yup! All browsers can take advantage of it. 👍

Why I am not getting the updated Angular contents in the site?
Are you talking about on your personal site or on our docs page?

It would be helpful if the docs included the version number the feature or function was released in.
Great idea! Please submit your feedback: kendoui-feedback.telerik.com. Thanks!

Can filters (contains, eq, neq…) be uniquely set for every column in the MultiColumnComboBox?
Currently, this is set across the entire component, but you define which fields should be included. So, if you set a contains filter, you could limit it to 2/5 columns.

When will the MultiColumnComboBox be available for React?
We are trying to build out the library as quickly as possible! If you’d like to see this component in React before some others definitely let us know on our feedback portal: Kendo UI for React Feedback.

Is it possible to wrap the MultiColumnComboBox as a React component?
Yes, it could take some work, but we could share some of the source code for our other React wrappers (they do exist!) that can be helpful when setting this up.

What are the licensing terms for the components? Do you need to purchase a licence once you deploy your app?
You can find this information on the Kendo UI website.

Is the MultiColumnComboBox specific to desktop web? Or, does it also support the mobile web?
It’s “supported-ish” if I can be honest. 😀 It’s challenging to figure out how to render a Grid component in a DropDownList in a small viewport. It can be interacted with on a mobile device, but there would need to be some updates from our side to make it ready for responsive web apps.

What about Kendo UI and AngularJS? any updates?
We officially support AngularJS 1.7.x! These are based on the jQuery components so everything we mentioned in jQuery should be available in AngularJS 1.7.x

Can we use these React components for SharePoint Online projects?
We have a website dedicated to providing information about building apps for SharePoint with Kendo UI: Office 365 and SharePoint. Please keep in mind that it targets jQuery but the same principles can apply to React.

How does one migrate Kendo UI for jQuery to Kendo UI for Angular?
That’s a very loaded question. Answer can vary a lot! 😀 I recommend approaching this challenge on a component-by-component basis. For example, create a view in Angular then add one of our components and try to match the feature set. It will require some work, but this is the best way to go. Plus, this approach lets you architect your app and work with our components in a manner that suits Angular.

Is there any known differences in the scrolling performance of the Grid between jQuery, Angular, React, and Vue?
It depends a little bit on the framework, but the overall performance should be the same. We’d be inclined to give the edge to Angular and React due to the frameworks themselves being better for partial updates.

Have there been any improvements to exporting large sets of data from the Grid component to Excel?
Yes, but there are still some limitations depending on the size of the dataset being exported. It might be worth offloading this to the server (since client-side exporting requires all data to be loaded on the client) using something like our Document Processing Library.

Is it possible to convert the Kendo UI JavaScript source code into ES modules?
This is possible with Angular and React. However, it’s a bit tricky to convert on the jQuery side. We’re still looking to see what we can do here though and will let you know if we are able to make this happen.

I’d like to enhance every Kendo UI components’ Sass source code to output single RTL or LTR CSS compiled file, rather than to output both of them (RTL and LTR) in the same component’s css compiled file.
I’ll take this note back to the engineering team to consider. Good idea!

Does Kendo UI for Vue use jQuery?
Currently, yes. We wanted to launch this as something for Vue users to get in their hands today, but we want to move over to native in the future. Can’t say when the switch will happen, but we want to serve the Vue community just as well as we serve the communities for jQuery, Angular, and React! We did this for React and now we have the set of native components.

Are you watching the progress on the Ivy renderer coming out soon for Angular?
Yes, we totally are! Luckily, there’s a lot of information being shared by the Angular team to help us prep. In fact, we were one of the first vendors to blog about it: First Look: Angular Ivy.

Why is Vue getting more steam on features than Angular?
Two reasons why this seems to be the case: 1) it’s based on the jQuery components which makes us get a 2-for-1 kind of package there and 2) the Scheduler is a pretty big component so it takes time to get the underlying engine written!

The Notification component is alright, but it feels limited that the only anchor is the viewport.
We’ll definitely continue to add features, so if we could add in something that makes it more usable let us know either via a support ticket or on the feedback portal: Kendo UI for Angular Feedback.

Can you use Kendo UI to debug React issues?
I’m not sure how that would work. However, Kendo UI for React works perfectly fine with the React tooling in Chrome DevTools, for example.

When we export around 50K records to Excel, we get an error in Chrome. Why is that? Is there another way to export such as larger volume of data in Chrome?
Large amounts of data can be difficult to accommodate on the client-side. It might be better to offload this work to the server-side. The tricky part with exporting this amount of data is that you have to load all of these items on the client and then create the Excel file. I would recommend checking out our Document Processing Library to see if that could help.

As always, a big-time THANK YOU to everyone who joined us for the webinar, and for all the great feedback. We hope all you’ll love the new features and improvements we’ve made to Kendo UI in the R3 2018 release. In the meantime, please feel free to leave your thoughts at our Feedback Portal or in the comments below.