Use Your C# Skills to Build Native iOS, Android and Windows Phone Apps with Telerik UI for Xamarin

With iOS claiming the majority of the high-end device market and Android winning almost everywhere else as well as Windows Phone continuing to gain developer mindshare steadily at 28% (source Vision Mobile: Developer Economics Q3 2014), it's clear there isn’t a single winner of the mobile platform war. What this means for mobile developers is that they usually need to build the same apps, with the same set of feature for at least 2 or even 3 mobile platforms.

However, learning the language and IDE specifics of each platform is a luxury a few among us can enjoy. As developers in a high velocity business we want to achieve the best results in a cost and time effective way. The launch of the Xamarin technology addressed this issue for the C# developers. With the recent launch of Xamarin.Forms building native iOS, Android and Windows Phones apps from a single, shared C# codebase became a reality. And because we are always looking to make developers more productive we released two weeks ago the first Telerik Chart for Xamarin.Forms. Now, Telerik UI for Xamarin plugs into the regular DevCraft release cycle adding more components to the suite. 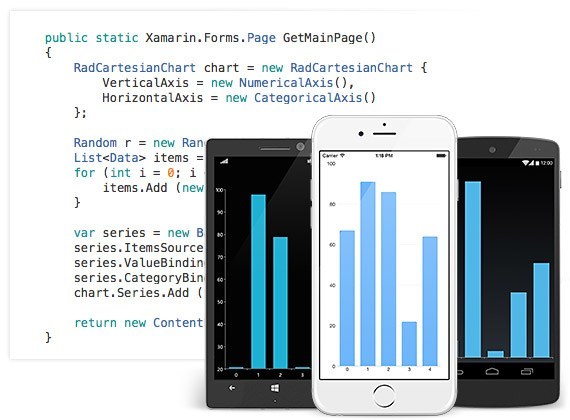 This version of Telerik UI for Xamarin contains:
Native in the Core

It’s important to note that both the Telerik Xamarin.iOS/Android wrappers and the Telerik Xamarin.Forms controls contain native code in the core, thanks to the UI for iOS, Android and Windows Phone suites, thus achieving the native look and feel for the respective mobile platform, with no-compromise customization and flexibility.

UI for Xamarin comes with comprehensive and easy to follow documentation. Since the feature set and API of the Xamarin.Forms Chart and the iOS/Android Xamarin wrappers could differ, and the iOS/Android Xamarin wrappers features and API mirror those of the native UI for iOS and Android suites, the documentation is structured the following way: The API and feature set of the Xamarin.Forms Chart is different from the Xamarin Chart for iOS and Android, hence the documentation is structured in the following way:

Telerik has established a standard for first-class support on the developer software market and UI for Xamarin will be no different. You get access to all support channels even during your trial period:
The Professional Developer License provides 24h response time to your enquires for an year, while the Trial License provides 72h response time for 30 days.

Considering how dynamic the development of a mobile app is, we deliver three major releases per year, and smaller updates on a monthly basis so you always get the freshest features.

The Trial version is fully functional meaning it provides all of the features that you can find in the Licensed version. The only difference is that the Trial version displays a trial message.