On September 30, 2014, Microsoft revealed the next version of Windows and puzzled the world by skipping a version number and labeling it Windows 10. People are still speculating on why, but the most logical explanation so far is that of a Microsoft developer who claims that backwards compatibility with legacy software is the main reason to go with 10.

For us at Telerik, the journey into the new Universal Windows Apps paradigm began few months prior when Microsoft announced the new Windows Runtime and their plans to converge Windows Phone 8.1 with Windows 8.1. Right after that we introduced UI for Windows Universal - a set of UI controls for building native Windows 8.1 and Windows Phone 8.1 applications.

Our roadmap has always been driven by our customer feedback so for the last few months we've been talking to a large number of our developers and the feedback they provided us with helped us greatly with maturing the product in such a short time.

The Q3 2014 release of DevCraft plays an important role as it marks the first official release of UI for Windows Universal. The bundle contains 9 universal controls and 9 that target Windows 8.1 exclusively. And here’s the best part - it comes as a free license upgrade to all our existing Windows 8 customers who have an active subscription.

Click here to download UI for Windows Universal now or continue reading to see what has been included in this release.

Chart (Universal) - The Chart for Universal Windows Apps is a versatile charting component that offers unmatched performance regarding loading time, drawing capabilities and real-time updates. Its intuitive object model and public API allow for complex charts to be easily created either in XAML or in code-behind. The control is completely data aware and may work in bound or unbound mode. Chart types are organized in hierarchies, depending on the coordinate system, used to plot data points. For financial scenarios the Chart supports Candle and OHLC (Open High Low Close) series. Plotting multiple data sets is possible through the Multi-Axis support so that you can display several data series based on multiple parameters in a single chart instead of displaying the data in 3 separate charts. The Telerik Chart is backed by super-fast loading, pixel-perfectness and excellent drawing capabilities that enable developers to display large amounts of data in real-time and offer the end user fast and fluid interactivity through Pan (Scroll) and Zoom (Pinch) gestures. Annotations and empty values support are also among the rich feature set of the Telerik Chart. Read more. 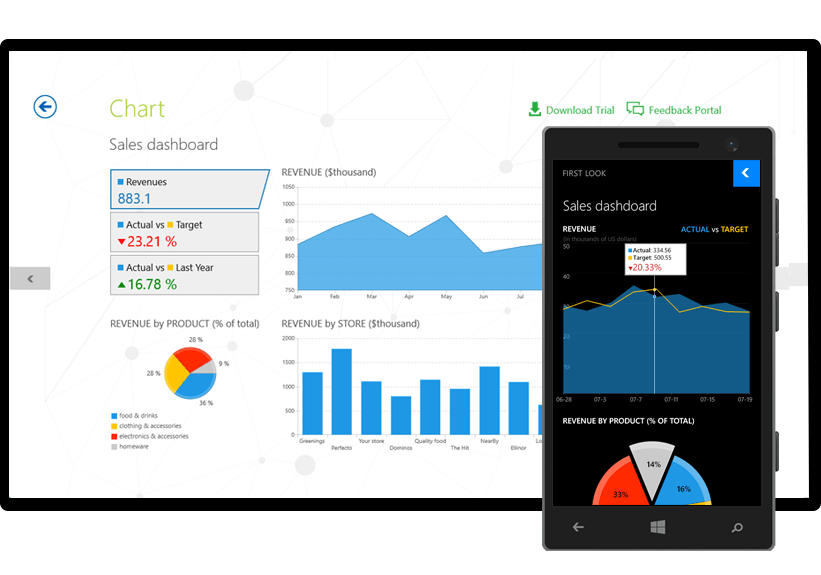 DataBoundListBox (Universal) - The ListBox control is in the core of almost any mobile application. With its blazing-fast performance the DataBoundListBox can be used to navigate through thousands of items without ever slowing down the application. The DataBoundListBox control supports vertical and wrap layout in addition to the concept of Header and Footer. These are specialized visual items that are displayed at the beginning and at the end of the scrollable list and bring additional information to the end-user. Per-item animations can be applied for when items are added or removed. The DataBoundListBox supports pull-to-refresh - an indispensable feature for data driven app. Virtualization of large amounts of data comes out of the box but can be further fine-tuned through the Automatic, OnDemandManual and OnDemandAutomatic data virtualization modes. Read more. 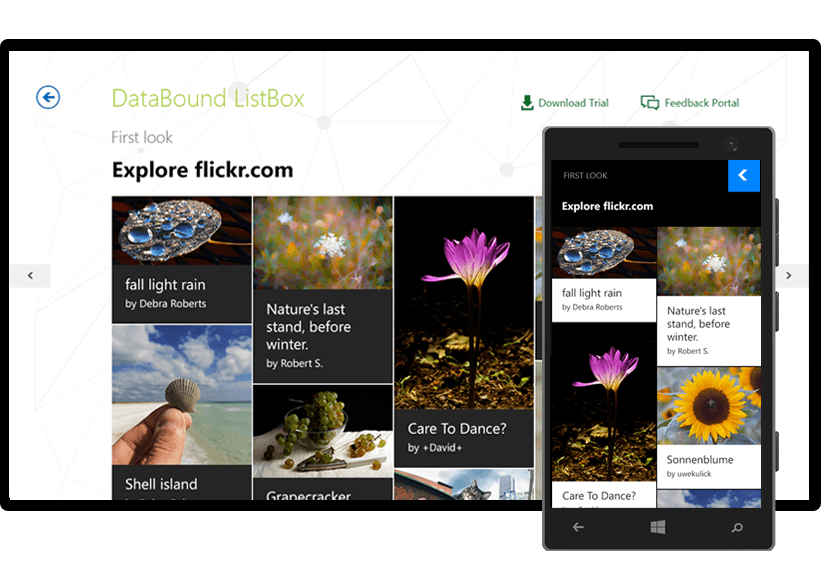 Calendar (Universal) - The Calendar for Universal Windows Apps is an advanced date input control that allows single or multiple date and range selection as well as displaying dates in different views. The control can be extended with appointments and is completely styleable through data templates and data template selectors. By default the calendar is using the culture from the device, but you can configure it with any other culture. Through fast and intuitive navigation the control offers support for single and multiple date selection that can be applied on all dates, including special days and custom events. Read more. 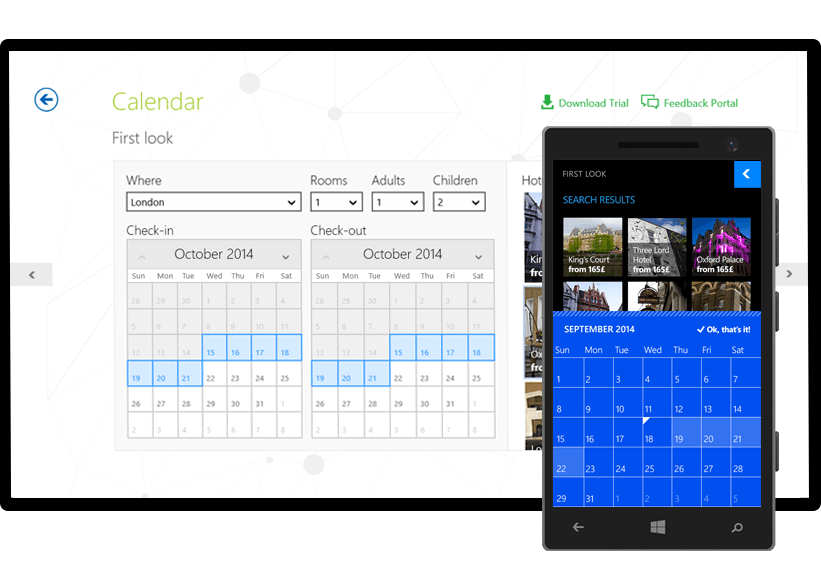 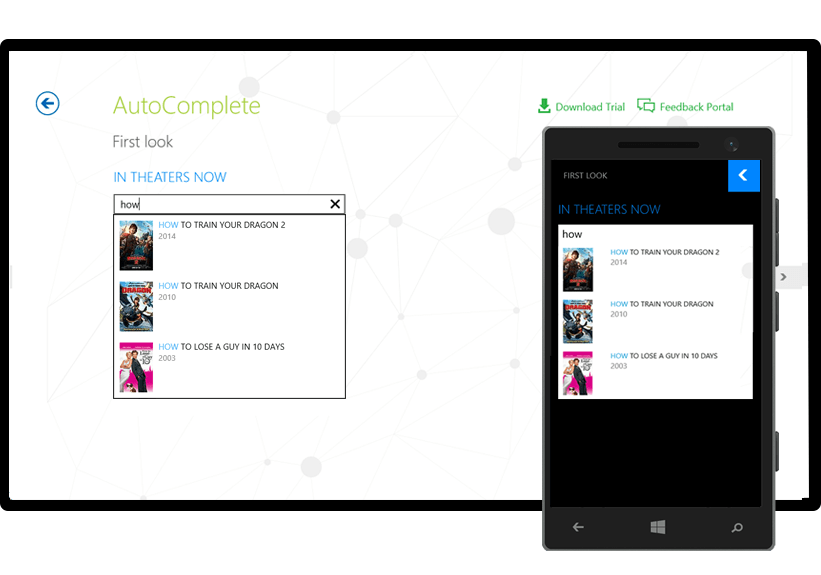 DatePicker (Universal) - Combining the best from both worlds we designed the DatePicker control entirely consistent with the Universal Windows guidelines. The control enables intuitive way to select day, month and year. The innovative user experience allows for infinite looping of all the three date components. With the Telerik DatePicker you can choose whether to inherit the current culture the device is using or to set a different, fixed, culture. The support for different cultures and the full control over the visualization of the selected date unlocks great opportunities for each application. Read more.

TimePicker (Universal) - The TimePicker allows users to select time much faster and easier by exposing elements for selecting hour, minute and time. The design of the control allows users to navigate through the elements with infinite looping. Read more. 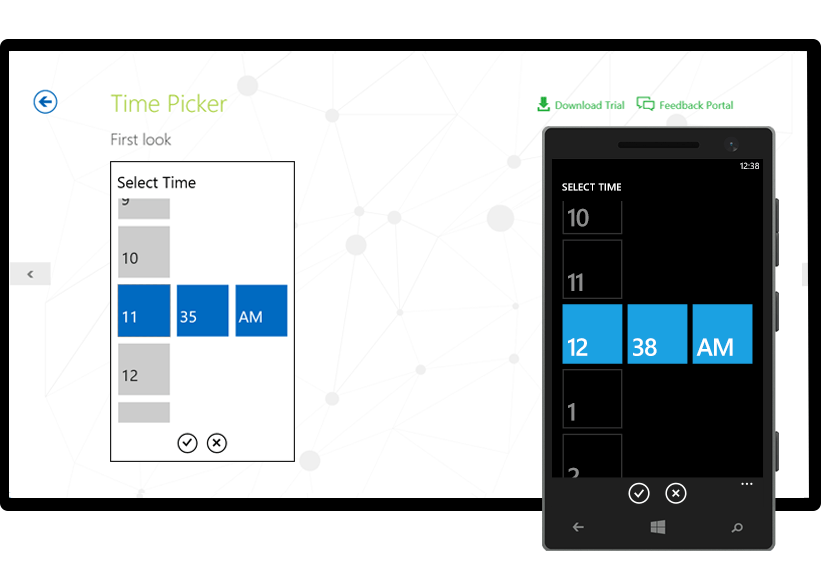 BusyIndicator (Universal) - The BusyIndicator for Universal Windows Apps allows you to display an animation indicating that your application is busy waiting for an asynchronous operation to finish. The control comes with a bunch of predefined animations that can be easily set but also allows for using your own animations. Read more. 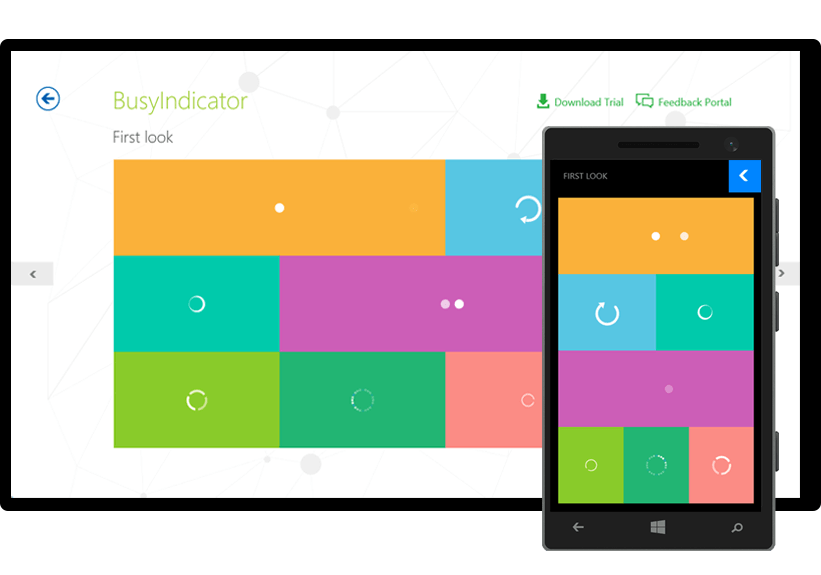 HubTile (Universal) - The HubTile enables developers to quickly implement Windows home screen experience their apps. Hub tiles, also called live tiles, are rectangular UI elements that dynamically update themselves to show the latest and up to date information from different services or app functionality. HubTile supports the full range of Windows style tiles – rotating, sliding and mosaic. You can display live changing data by modifying the front and back of the tiles. Read more. 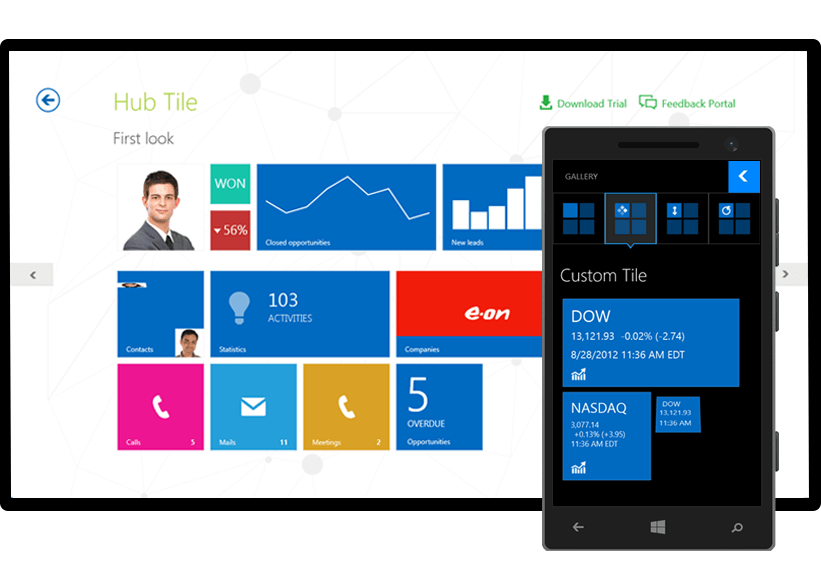 Rating (Universal) - The Rating control provides the end-user with the ability to evaluate a feature of your app through a range of rating items associated with a given value. The selection happens, when one of the rating items is tapped or by applying a pan gesture over the rating items. For scenarios where the rating value is not exact the Telerik Rating control allows you to visualize only a fraction of the item through its RatingDisplayPrecision property. Read more. 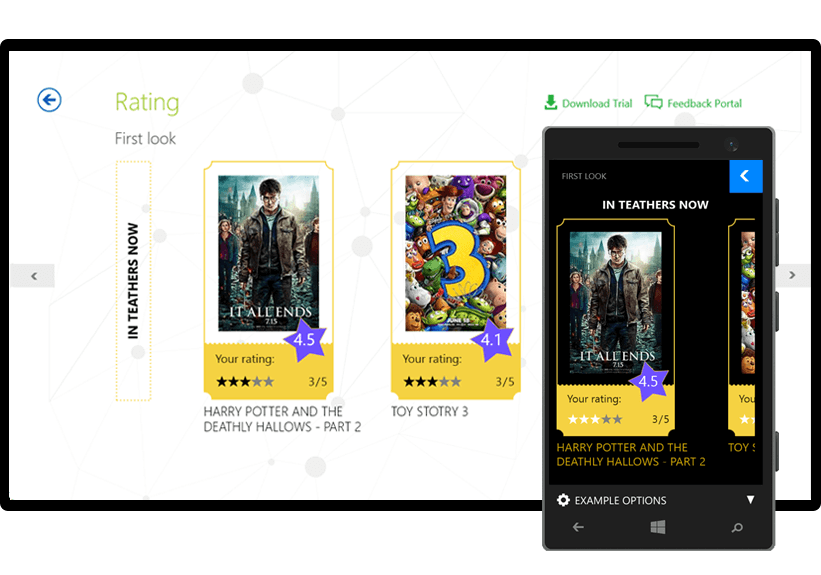 The rest of the controls have the same feature set as their UI for Windows 8 XAML counterparts.

Data Grid (Windows 8.1 only) - Every aspect of the Grid for Windows 8 XAML has been built from the ground-up to deliver maximum performance and native look and feel. The advanced UI virtualization brings top performance and makes the grid fast, fluid and responsive, capable to process hundreds of thousands of records, even on low-end devices. Some of the supported features are:

Data Storage (Windows 8.1 only)
- The Telerik Data Storage facilitates the communication with the SQL database, which can be a serious overhead for a non C++ developer, who is not familiar with the native Windows development paradigms. Read more.

Gauge (Windows 8.1 only) - The Telerik Gauge control offers a variety of gauges for all your application's needs – whether you need to display distance, speed, duration or any other dynamic data. Read more.

NumericBox (Windows 8.1 only) - With the NumericBox control you can edit various value-formats such as numeric, percentage and currency. That’s especially useful in apps that allow users to use or set data like price or currency. Read more.

Pagination (Windows 8.1 only) - The Pagination control enables fast and intuitive navigation between application pages no matter what the content is. Read more.

Slider (Windows 8.1 only) - The Slider allows for selecting both single and a range of values. Read more.

BulletGraph (Windows 8.1 only) - The BulletGraph helps you compare projected and featured values and get an instant access to the overall progress of a certain task. Read more.

The bundle comes with an app that demonstrates various usages of the controls.The application follows the universal apps guidelines and is available for all compatible Windows and Windows Phone devices. Source code is available as well. 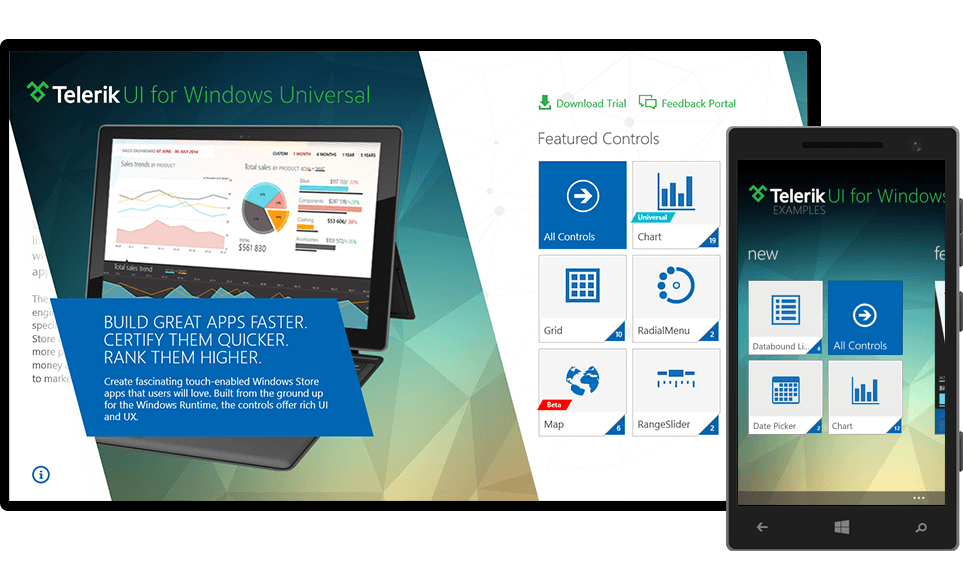 Roadmap and Announcements
Universal Apps are the recommended approach to Windows Store apps. Q3 2014 marks the first of many UI for Windows Universal releases to come. Our first goal is to hear what you like and dislike about this release. If you find something is missing and you’d like to see it included in the future releases, let us know on the product’s feedback portal. In the meantime, we will continue making all the Windows 8.1 specific controls universal.

Some of you might be wondering about “UI for Windows Phone”. This is a valid point after the fact that Windows Phone 8.1 no longer uses the traditional XAML(Silverlight) development stack but relies on the same codebase as Windows 8.1.

During 2015 we will focus on bringing all of our Windows Phone 8.0 controls to the new Windows Runtime making UI for Windows Universal the most comprehensive suite on the market.

With the above in mind, there are couple of changes that need to be mentioned.

C# wrappers for cross-platform developers
Providing a consistent cross-platform story is high on our list of priorities so with Evolve 2014, the annual Xamarin conference,  we announced Xamarin wrappers for our iOS and Android controls as well as a Xamarin.Forms version of our Charting library.

Read how to reuse your existing c# skills to build native iOS, Android and Windows Store apps with Telerik UI for Xamarin.


Mobile Design that Scales: Building for Existing and Future Devices