Augmented reality and virtual reality are gaining steam in the market. So why haven't more developers hopped on board?

Over the past few years, major enterprises and small businesses alike have set their eyes on the future of augmented reality and virtual reality. They are looking at everything from what potential value it could provide to their customers to how they (as a business) can benefit from these new technologies, either financially or organizationally.

Of course, we here at Progress have been considering the possibilities of AR/VR too!

For the past six months, we’ve been doing R&D with the AR/VR technologies of today to see what we can do in this space. Historically, we’ve always tried to be ahead of the curve when it comes to new tech and this case is no different. The potential of the market turned out to be huge, as it is forecasted to reach some $215 billion by 2021 according to Statista and, as a company working in the IT sector for years, we believe we can add a lot of our existing expertise into this space. You can read more about our findings thus far in my previous blog.

We decided to set up a small team of experienced developers and product people and started building our first deliverable—a fully functional demo application built with Unity3D, which is targeting the Microsoft HoloLens device. We were pleased with the results and managed to successfully complete our initial milestone, which was to have the demo ready for the Microsoft Build 2018 conference. This enabled us to put it in the hands of developers and business owners to get their feedback and see what their reactions would be. 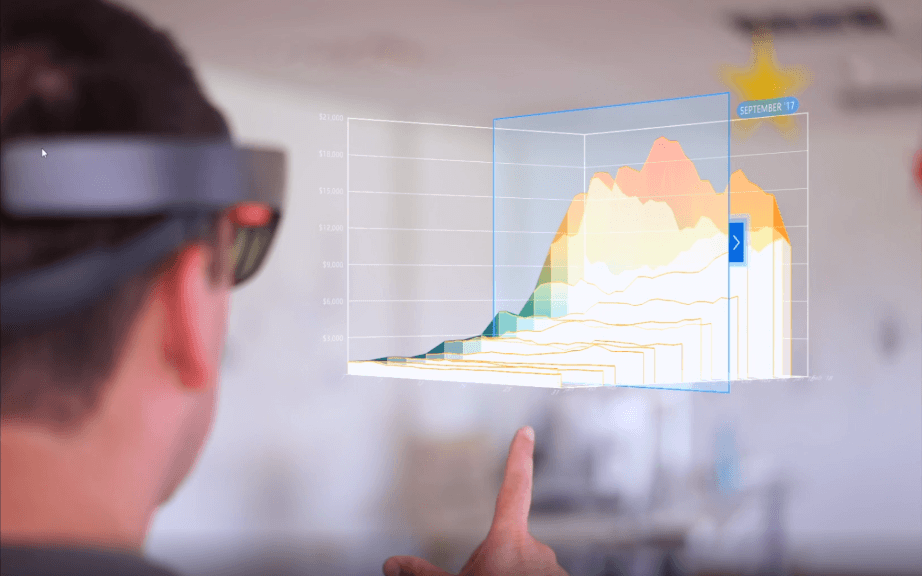 Screenshot of the demo, took using a Spectator View setup

Our goal with the launch of the sample application was to showcase an example of AR in today’s world and hear how people feel about doing AR/VR development, and what potential implications they see for it in their business.

I also attended the ProgressNEXT 2018 conference, where I had the chance to talk to many clients, partners and colleagues about AR/VR and further validate what we learned at Build 2018.

The bottom line of my observations is that people are excited by AR/VR but very few of them actually do or are willing to do anything in this space. However, most of them believe that this technology will inevitably become mainstream at some point in the near future, which I might add was not surprising to us at all. According to the Chasm Theory, we are still in the “Innovators” phase of the adoption curve, meaning that still only a small portion of people (the innovators, ~2.5%) are actively looking into it.

So, that being the case, what’s preventing developers from diving into AR/VR? Following multiple discussions with innovators and technologists, we discovered the top three reasons why many developers are not actively pursuing AR and VR development.

1. I Have No Business Requirement to Make Such Apps


Indeed, this is a very simple and yet solid reason for not engaging in AR/VR today. The business and market is simply not there yet. The technology is emerging and most of the problems today are solved with conventional technologies. Early investments in emerging technology imply higher risk and most of the companies would be reluctant to risk more than necessary. This leads us to the second reason.

2. I See No Value in Using AR/VR to Solve My Problems

Many people simply don’t see the value that AR/VR brings to the table in terms of solving business problems or improving user experiences. And that’s fair. Most, if not all, of problems today can be solved with existing mature technologies, which is “good enough” for most of the businesses. The “Innovators” group is only around 2.5% of the population, right? As the technology expands and evolves, we expect that more people will hop on the train and have a better understanding of how they can leverage it to their advantage.

3. The HoloLens Device Is Pretty Expensive

Interestingly enough, many people thought that the only way to do AR for business is through the Microsoft HoloLens device. This assumption probably stemmed from the fact that we were showcasing our demo application through HoloLens. But yes, a $3,000 investment per single device requires a strong validation about the added value of the technology. However, the AR/VR space extends much further than a single device and you can “attack” multiple devices at the same time even today. We’ve seen lots of new products being launched targeting this market, from MagicLeap and Meta 2 to Google Glass Enterprise Edition,  and it’s only a matter of time before they start moving into general adoption.

The three issues listed above are valid, reasonable and solid ones. Still, it is our belief that we can completely understand a technology and its strengths only if we do some practical experiments and dive deep into its internals. As Morpheus once said in my favorite movie:

“Unfortunately, no one can be told what the Matrix is. You have to see it for yourself.”

Personally, I was also a skeptic at the very beginning when we started our internal conversations. I thought that AR/VR is all about gaming and entertainment, and that our company should not go into this space—but I was wrong. So, what would I advise you to do?

It’s really hard to truly understand the space unless you go ahead and get your hands dirty first. Regardless of whether you’ve been coding for half your life or recently started on your first job as a dev, you know that results only come with actual work. That being said, if you are a C# developer (or at least have knowledge of the language), a good starting point for you could be our demo application—we have provided a download package with the complete source code.

The HoloLens device is expensive but you can use Unity3D built-in emulator or the HoloLens emulator that comes with the development tools. Besides, if you step on Unity3D for AR/VR development, you can export to virtually any device that exists today. HoloLens is not the only option—in fact, it is the most expensive one and is specifically positioned to target enterprise verticals.

Once you have a better understanding of the technology, you can spot some opportunities for solving existing problems more efficiently through AR/VR. I was legitimately surprised to discover how many use cases exist (even today) that can be solved more effectively through AR/VR than conventional technologies.

I am very curious to hear your thoughts on this subject as well as your expectations of the potential of this market, so feel free to post in the comments below or drop me a line via Twitter and we can kick off a discussion.

Thanks, and good luck!

This blog was written by Georgi Atanasov with help from Panayot Cankov. A version of this blog was originally posted on the Telerik AR/VR Medium blog.

What Can Web Designers Do To Help Reduce Ecommerce Returns?