The State of JavaScript Survey 2018 - the Angular Scoop

As you sit down to Thanksgiving or Friendsgiving 🦃 dinner this week (if you’re into that sort of thing), you might be interested to know the results of the annual State of JavaScript Survey for 2018. We know this week should mostly be about spending time with loved ones and taking time away from code, so we’ll keep this update short and sweet. We'll cover a lot of ground but focus primarily on Angular. 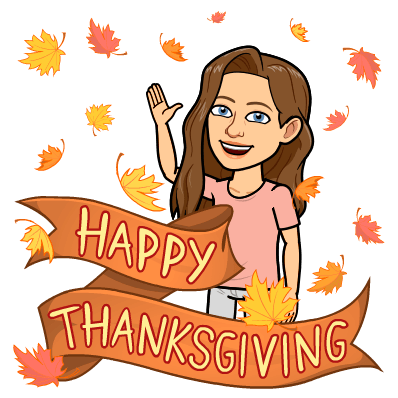 Popularity of Frameworks in 2018 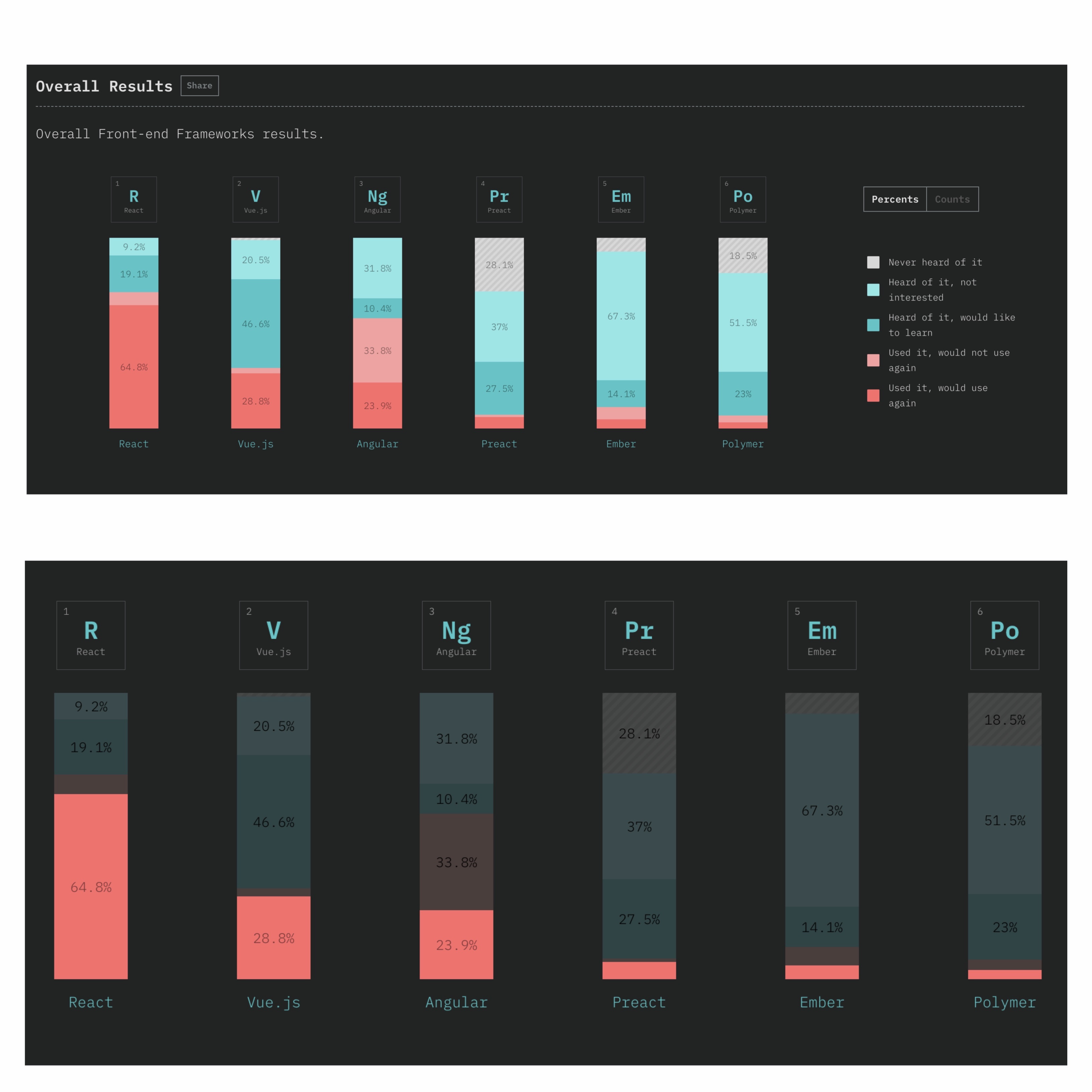 The overall results for popularity show React, Vue.js, and Angular in the lead, followed by Preact, Ember, and Polymer. If we focus just on “Used it and would use it again” category, we can see the percentages break down which puts these three frameworks firmly in the lead. I was surprised that Preact made the list of top four, so I checked out exactly what frameworks were in the survey and found this lovely list: 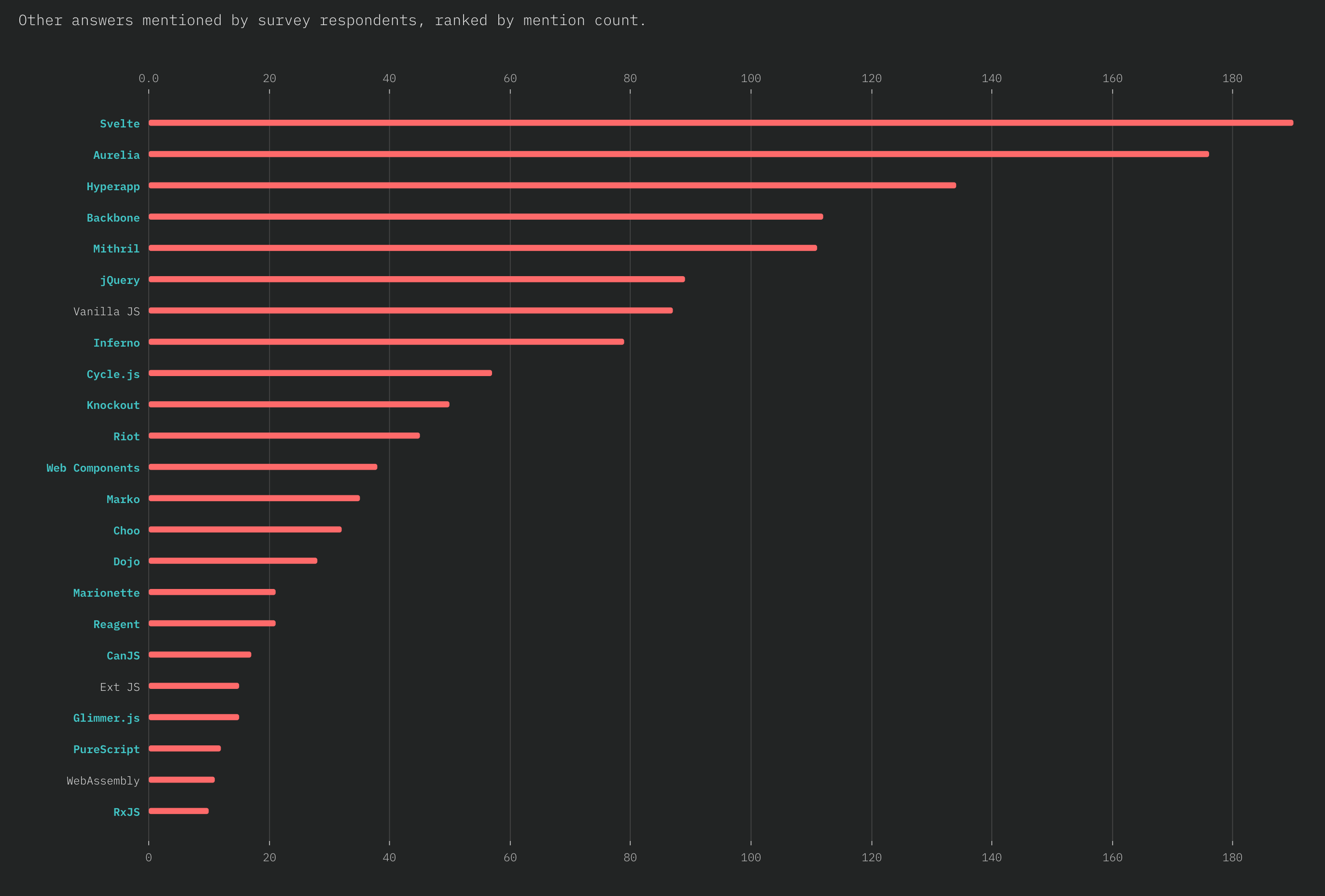 Some of the other top frameworks that didn’t make top 6, included Svelte, Aurelia, Hyperapp, and Backbone. All received under 200 mentions.

Now might be an excellent time to remind everyone:

These results are only as good as the audience they surveyed and may not accurately represent the dev community as a whole.

So while it can be fun to look at the results and hypothesize the why behind them, every result should be taken with a grain of salt. 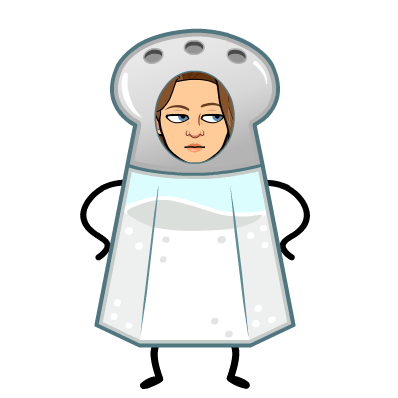 Salary for Devs of Frontend Frameworks in 2018

I think it’s remarkable, if you check out the salary for these same frameworks, the chart is almost exactly inverse from the popularity chart — Ember, Polymer, and Preact leading for highest Salaries overall and on average. 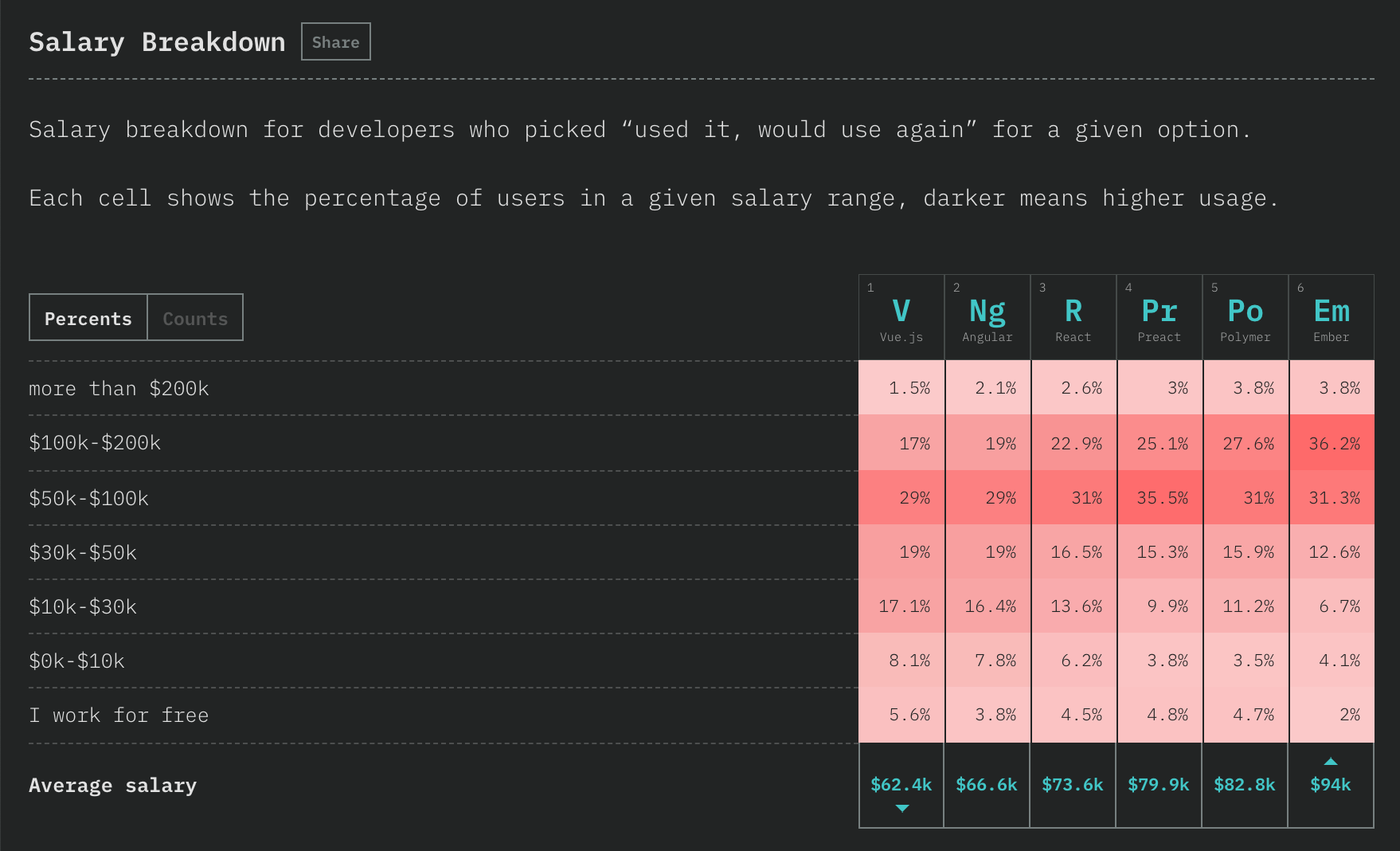 Why are less popular frameworks higher paying? I suspect it has something to do with supply and demand. If not many devs like programming in a certain framework, then demand (and therefore salary) should be higher for them.

Also, side note, WHO ARE THESE PEOPLE?

I’m surprised there are so many people working for free, even if it’s only about a 1,000 people in total. I hope with all my heart these are people working on open source projects or non-profit type work. What we do as developers is valuable and I hope even the newest of devs know this.

Company Size for Frameworks in 2018 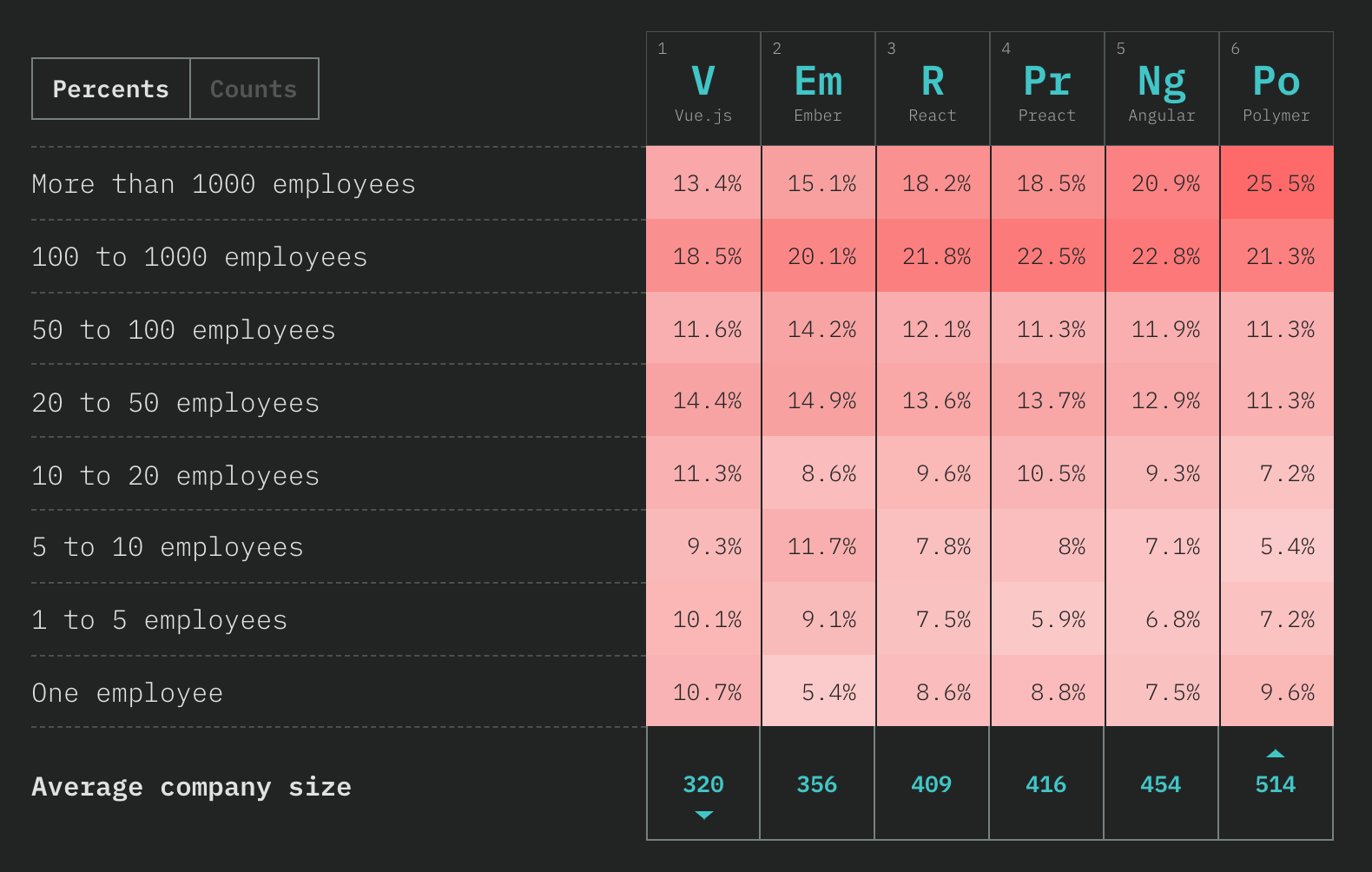 Another unsurprising result is the two leading frameworks for largest company size — Polymer and Angular. This doesn’t surprise me because both of them are created, maintained, and tested by a ginormous company, Google. So it only makes sense that when other large companies/teams look to what Framework to use, they would choose one that is created/tested by an equally large company.

Most Liked/Disliked Aspects of Angular 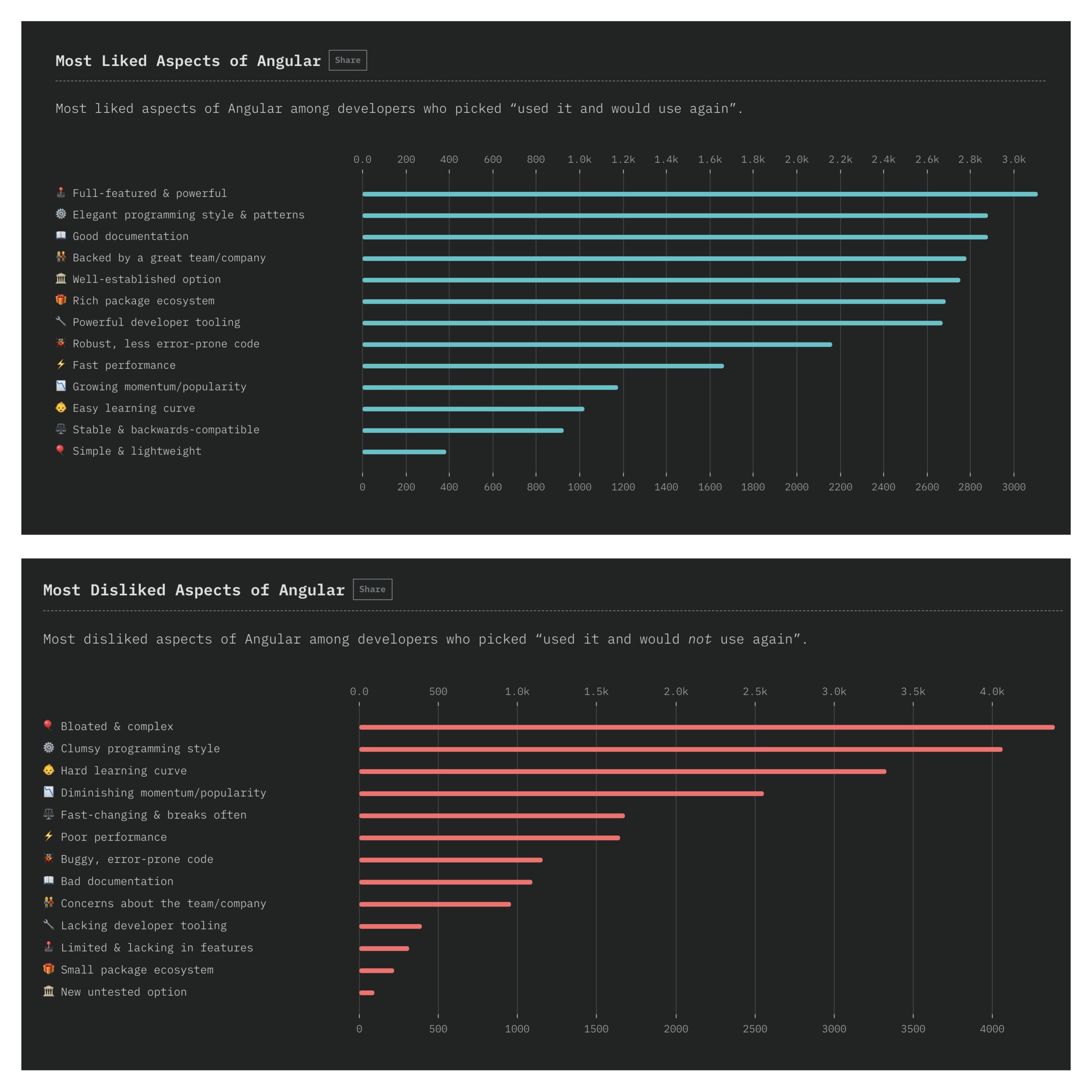 The conclusions drawn for Angular weren’t as sunny as one might hope. 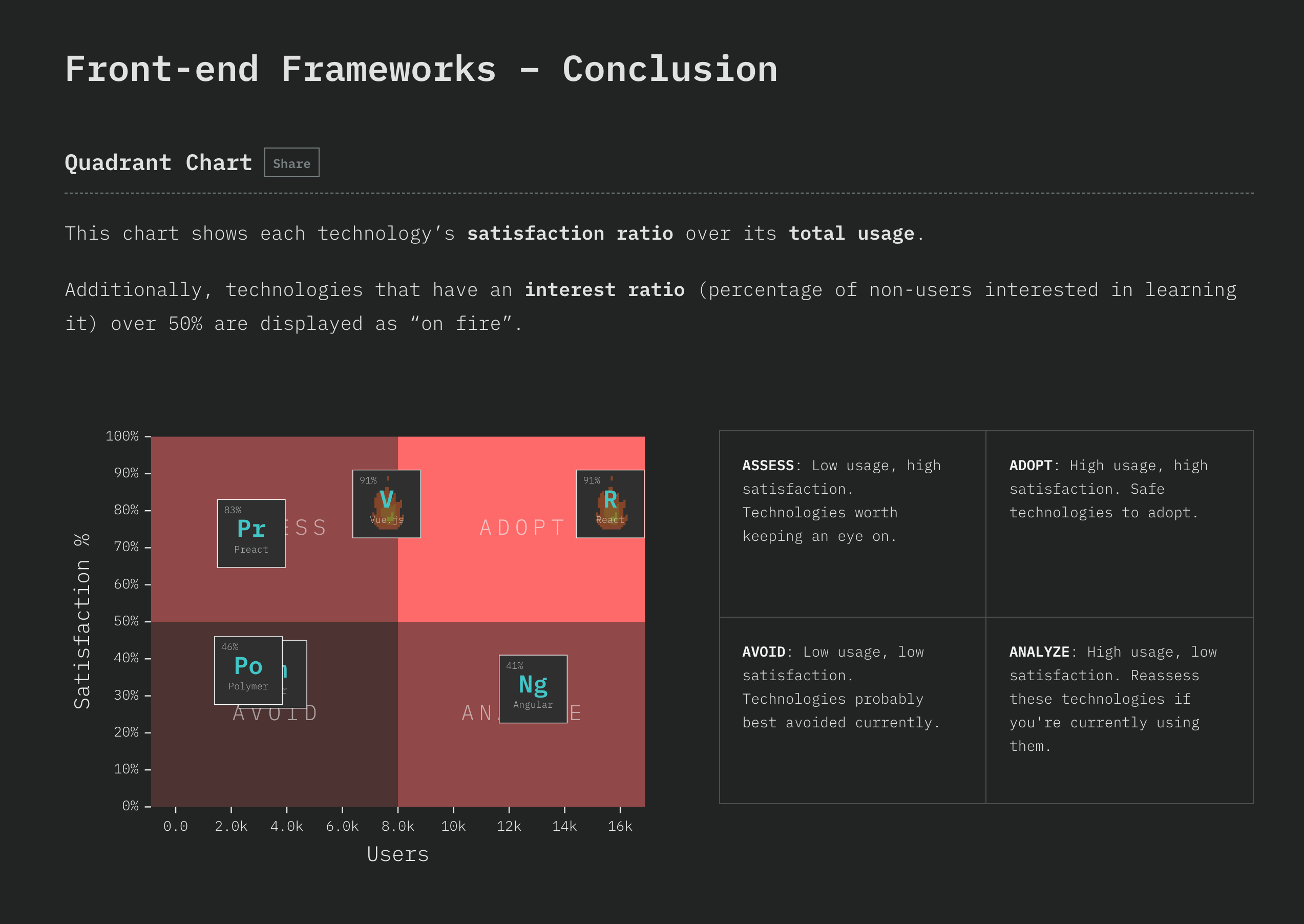 The other story of those past couple years is the fall of Angular. While it still ranks very high in terms of raw usage, it has a fairly disappointing 41% satisfaction ratio. So while it probably isn't going anywhere thanks to its large user base, it's hard to see how it will ever regain its place atop the front-end throne. - State of JS 2018

This prediction seems a bit too bleak for a couple of reasons. It’s true that Angular won’t be going anywhere because of its huge user base, however, I believe because of the steady pace Angular is trodding and the future plans they have laid out, we could be on track for a throne toppling in the upcoming years.

I also think it is unfortunate that the survey has looped AngularJS and Angular together for this year and all upcoming years in the survey.

AngularJS is a totally different framework from Angular and I believe its users will have drastically different concerns and happiness levels. Because of this, I really don’t know how accurately we can take the Angular findings from this survey. 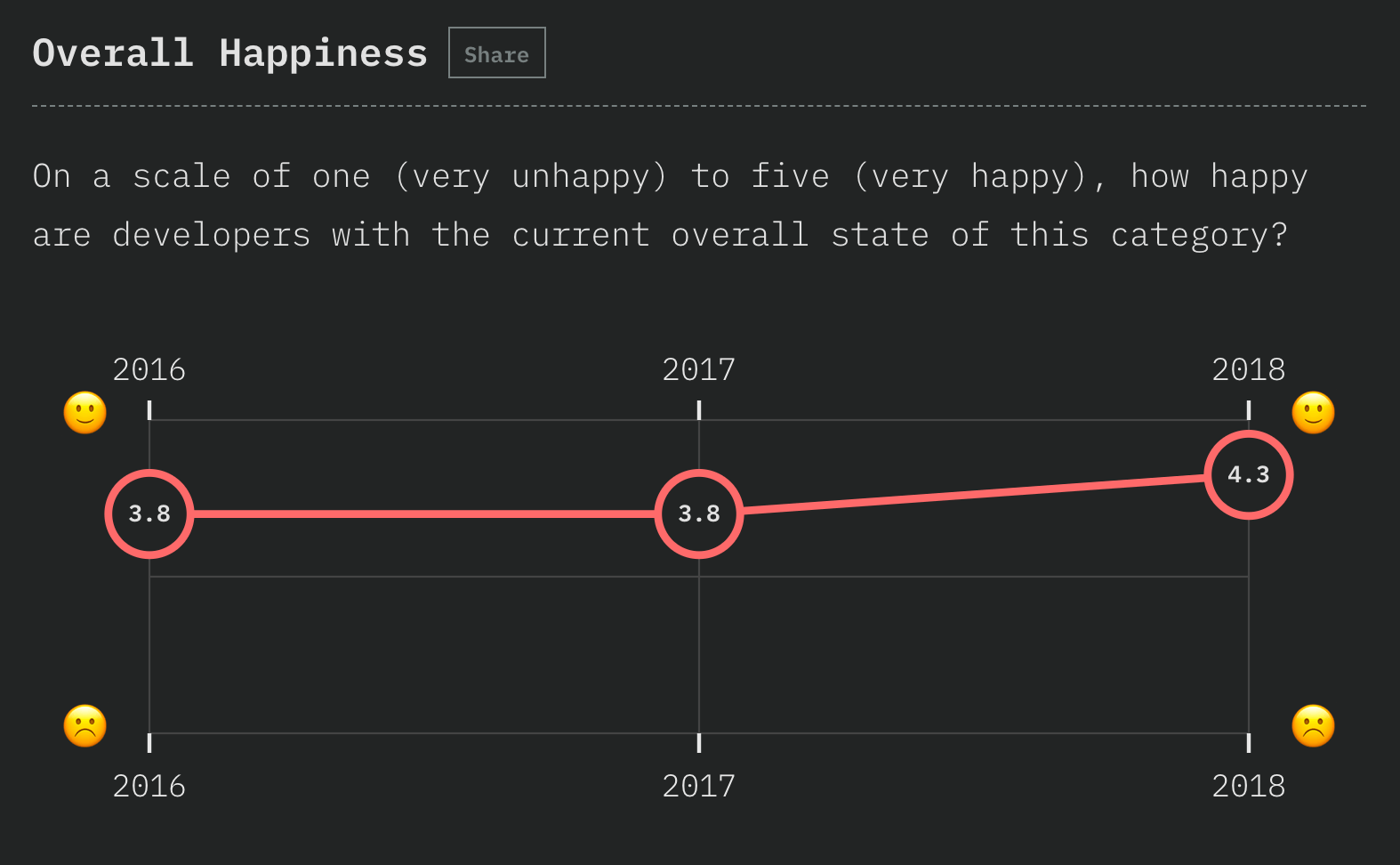 It seems, we as developers, are happier than we have been in the past two years, with the state of JS Frameworks. It could be that things are leveling out for us as a JS community. If you are one of the people who are still unhappy, though, the problem could be your job and not the framework you are working with.

I’ll pass on some million dollar advice I received from a friend in the industry, Sharon Dio. If you are unhappy in your job, take two weeks to analyze why. Write down everything you can think of during those two weeks that you enjoy or despise, no matter how trivial these items may seem. (For instance. checking company emails, styling UI, or even where my desk is at in the office.) Once you’ve made your lists, then the hunt begins. Start looking for companies that are doing the things on your enjoyment list. Even if they aren’t hiring at the time, send them an email with your resume and explain why you are seeking them out and how their values align with your own.

I hope this advice helps, even if it means you move away from Angular (my true love). If it means there are happier, more productive devs in our community, I’ll take it as a win. I hope you all have a wonderful week, whether or not you are celebrating Turkey Day and happy coding!

Permission was requested and granted by the site creators to publish screenshots of this survey.

Angular Basics: How To Get the Value of a Selected Dropdown Menu Item

7 Things To Know Before Your Angular Interview