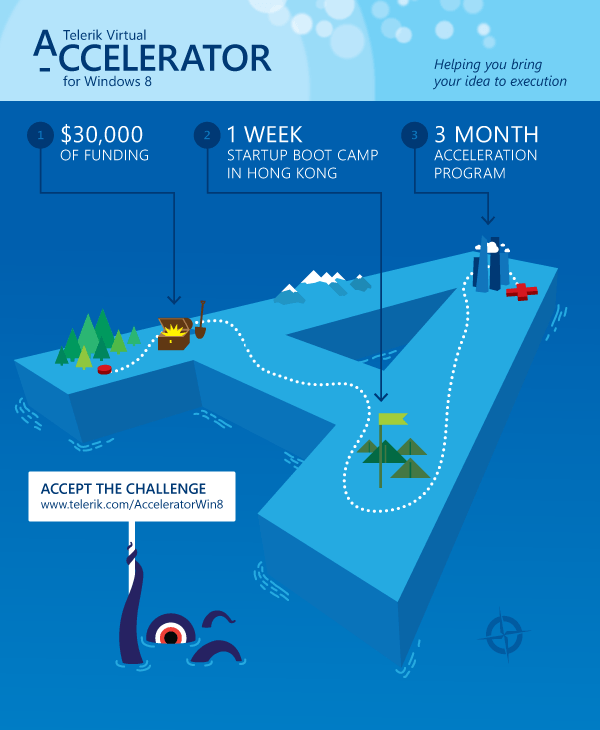 One team (SoFly) is about to fly to Hong Kong to meet their mentors for the next 3 months and to receive $30,000 funding for their mobile app project.

At the end of January 2013, Telerik announced its Windows 8 Accelerator. The program aims to connect with mobile startups that share Telerik’s commitment to Windows 8. After an intense application process, the judges selected SoFly - a second screen application intended for use during media content consumption such as watching TV shows or movies.

“When a team applies to an accelerator program they need a perfect storm of: a rock star team, a great idea in a hot space, early stage entrance, the team’s ability to be coached and ultimately the ability to execute. Team SoFly hit all of those criteria and we think that the young and energetic team has chosen a rich and dynamic space. TV and media are changing right before our eyes and SoFly can be a part of that evolution! Paul and I look forward to working with and mentoring the team when they arrive in Hong Kong,” said Stephen Forte, Telerik’s CSO and the co-founder of AcceleratorHK.

In addition to funding, the Telerik Windows 8 Accelerator investee participates in a mentoring program that will put the company through a rigorous startup process, based on best practices. This includes the process of customer development.

“Having run a few startup boot camps and accelerator programs, I am always surprised at the quality of the applicants. We had a great pool of candidates and it was really hard to choose between them. To be honest, I would have been very comfortable working with any of the short listed teams,” said Paul Orlando, co-founder and program director of AcceleratorHK. "The other 4 shortlisted apps that got our attention are: Taskifyapp, JotStory, Sling board apps and The Joy project. I’m quite confident that we’ll see these organizations again in the near future.”

And the list of strong ideas doesn’t stop here.  Three other apps – Smart Restaurant, Apyo and Notair stirred the community and won the community award with more that 1K votes each.

Ina Toncheva (@pakostina) is a Product Marketing Manager at Telerik. She is a digital and mobile marketing explorer and works at Telerik with a focus on the native mobile UI family.