Following customer demand we updated our chart for the Q1 2013 Service Pack release with several crucial features. These are:

Sharing an axis between two or more series requires a little trick because we can’t put a chart axis in the resources. If we do and then refer to it with {StaticResource resourceKey} Silverlight will crash because the axis will be inserted into the element tree twice. What the user has to do is to wrap the axis in an object or put it in a collection and then access the axis through the wrapper. For example here’s a custom collection that we can initialize in XAML.

Now we can use the collection and insert the axis like this:

Finally it’s all a matter of binding one of the axis properties of our series to the collection’s index at which the shared axis is located: 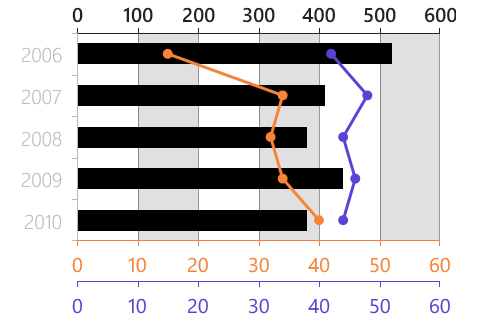 Each of the axes in the Cartesian chart can now be aligned to the left, right, top or bottom sides depending on whether the particular axis is vertical or horizontal. Each cartesian axis has VerticalLocation and HorizontalLocation properties which control the alignment. For example here is a horizontal axis aligned to the top: 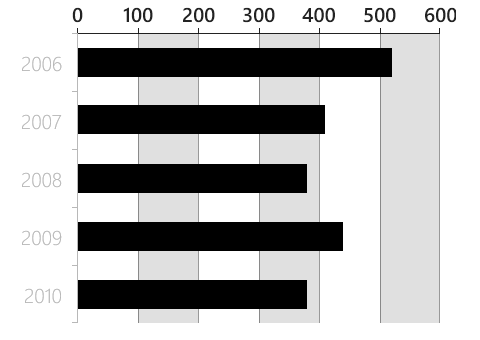 Another requested feature is a way to display annotations on the chart. With previous releases it was rather difficult because if you put some sort of decoration on top of the chart it will become irrelevant. As soon as the chart is zoomed or panned or if its axes changed, among other things, such an artificial decoration loses track of the chart state.

The first type of annotation is the GridLineAnnotation. It allows developers to draw a horizontal or vertical line across the chart (or around if it’s polar/radial). It can be used to denote a threshold for example. 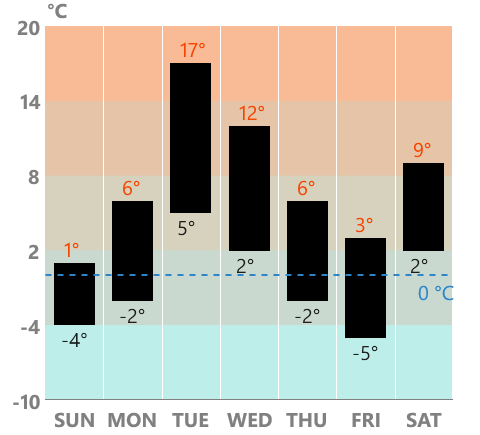 The second type is the PlotBandAnnotation. It is similar to the grid line in that it stretches over the whole chart along a given axis but instead covers an area from a min value to a max value specified by the From and To properties. 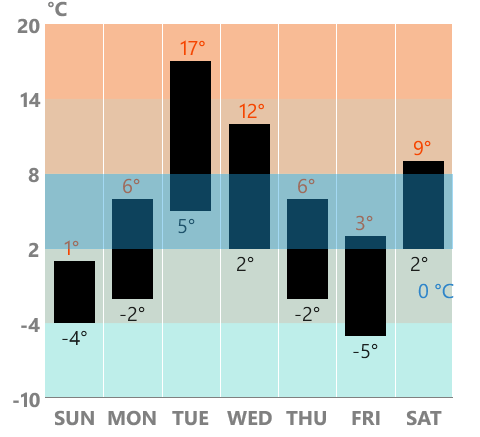 Finally, the last supported annotation type is the CustomAnnotation. It allows displaying any kind of indication on the chart area in the way that ContentControl allows any type of content. The custom annotation has Content and ContentTemplate properties and also HorizontalValue and VerticalValue (Polar/Radial value for the polar chart).

The last thing worth mentioning is empty values support. Developers don't need to do anything special to take advantage of this. If the data objects, that the series are bound to, have null as values of their properties the chart will just draw itself accordingly by inserting gaps in the UI.

Our Examples app has been updated with new examples to highlight these features so be sure to check them out (and their source too).

If you have any questions or suggestions, we’d be glad to hear from you.