Traditional development has many quirks; GitHub Codespaces provides a better development experience and a better choice for improved productivity and workflow.

In 2020 GitHub Codespaces was released—a revolutionary platform that refines the perception of application development to a whole new level. Initially released in beta, it’s now available as a pay-as-you-go service for GitHub teams and enterprises.

In this post, we will be looking at the flaws of the traditional development environment and then GitHub Codespaces and the good stuff it has in store for developers. Without any further ado, let’s get started.

The access-from-anywhere feature provided by the web-based source code management and version control systems (GitHub) means that developers can easily collaborate on a given codebase, make modifications and improvements based on the project requirements from their local machine, and pull changes remotely to ensure that the codebase is appropriately synchronized.

That also means that the developer’s machine has to put up with the continuously changing updates from the project and is just expected to work well with whatever comes. This sometimes works, but not in all cases.

As the codebase gets larger, the project configuration changes, dependencies changes, newer versions of tools are introduced, etc. That puts so much stress on the developer’s machine. Local development becomes very frail, and developers tend to spend more time doing unnecessary things like fixing issues that came with pulling new updates and going through ReadMe files, struggling to set up their environment.

The bamboozling experience for a new teammate or contributor to create a working setup instead of just focusing on writing code is a severe setback to productivity and makes the local development environment setup a nightmare.

What Is GitHub Codespaces?

GitHub Codespaces is a service that provides developers with on-demand access to a secure development environment running a given codebase (Git repository) on a remote server. It also allows the developer to debug, maintain and make changes via a full-featured (with syntax highlighting, themes, extensions, version control, etc.) browser-based or locally installed Visual Studio Code IDE from their local machine.

GitHub Codespaces uses virtualization tools under the hood, such as containers and virtual machines. Codespaces can be thought of as having a backend part and a frontend part—the usual client-server architecture, nothing fancy. The backend part is where all the application code is usually run in a Docker container (you don’t need to install Docker to use Codespaces) with the required runtime and tools, and the frontend part is the IDE, which interfaces with the running application.

Basically, all the advantages of Codespaces revolve around removing the developer’s machine imperfections and the barriers to shipping quality code, while providing a great development experience.

Setting Up a Codespace for Your Project

Setting up a codespace involves the following steps.

Before a codespace is made available to the developer, the following events occur—though this does not include every little detail but just a clue of the core processes involved at each stage.

Note: If you don’t see the “Open with Codespaces” option, that’s because it’s a feature provided as a paid service on GitHub. 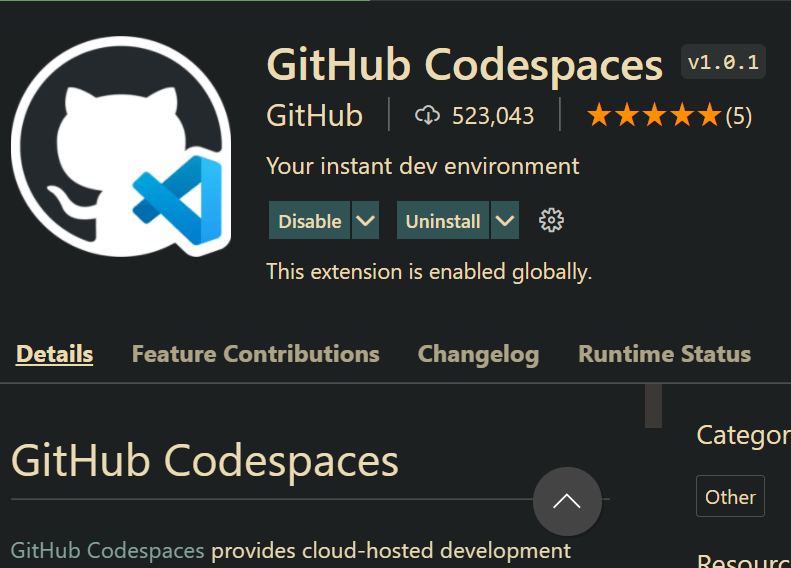 GitHub Codespaces allows developers to configure their development environment to suit their workflow and unique preferences regardless of the device they choose.

A Dockerfile may also be included in this folder and linked to the devcontainer.json file to describe the image to be used to generate the development container. (Other use cases can be found here.) This folder can be created manually or using the “remote containers” extension.

Note: Ensure that the .devcontainer folder is added and committed to version control to ensure the configurations that live in it are persisted. Also, when modified, rebuild the development container again to apply new changes.

Like the project-based configurations, these are developer-specific and meant to be applied globally to whatever codespace a developer works on, but not to others using the codespace. They can be thought of as the developer’s personal preferences suited to their style and workflow during development.

These settings are applied via the following:

Remote development is a game-changer to the previous ways of writing code. With GitHub Codespaces at the forefront, possibilities are limitless to what lies ahead for a richer development experience. Hopefully, with this guide, we have a good headstart with using Codespaces in our future projects.

Git Started With Github in Mist