Improved Android Calendar and Chart with the Q3 2014 Service Pack

With the Q3 2014 release, we introduced quite a lot of new functionality to our Android tools. Since then, we gathered some great feedback from developers that helped us better shape the product for the regular Service Pack.

The Q3 2014 Service Pack 1 comes with many Calendar and Chart optimizations.

You will find this post useful, especially if you’re using or planning to use our Calendar component in your app. The calendar has gone through a major optimization process due to the new features in transitioning between screens and the animations system.

New Features and Optimizations: We revisited the structure of the calendar in depth. We decreased the creation of new elements to a minimum and replaced with caching and reusing of already present objects to minimize memory demand and avoid the garbage collection from occurring too often.

Scroll Modes: The Calendar now supports a range of different scroll modes and additional features for customizing them, including animation speed, snapping, flicking, panning and more.

Customization of Elements: Customizing the Calendar has been made easier through a wide spectrum of properties and settings for customizing of the calendar elements. These include but are not limited to: 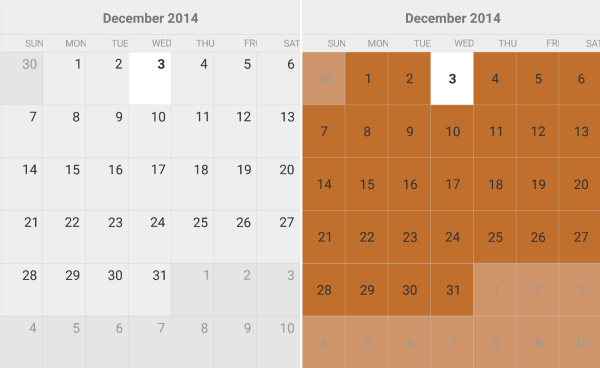 All this can be achieved by calling the calendar adapter.

We revisited all calculations and optimized them for better touch and feel in gestures and animations. We added date caching to the date change events and presented date virtualization to ensure top speed while covering an infinite collection of dates in both past and future points of time. We addressed and replaced all invalidations with internal caching to reduce redundant calculations. We also improved animations and transitions for all display modes.

New Light and Dark Themes: We have enhanced the Calendar with Holo Light and Holo Dark themes. 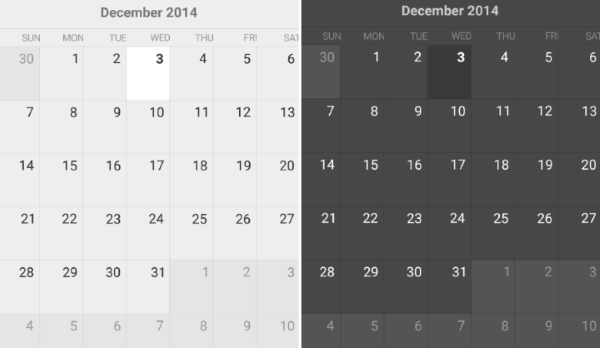 Calendar Structure and Mechanics: One of the more noticeable changes is that the Calendar is no longer a ViewGroup. Previously, the Calendar was holding tables full of cells, where every cell was a View instance. This approach proved to be working at first, however, the new transitions demanded a more lightweight architecture. This led to stripping the calendar down to being a single View, holding information about the current dates.

If you’re manipulating Calendar cells in your code, you need to cast them to CalendarElement, as opposed to View.

We will support the assistant for a short period of time and its properties will still have effect on the behavior of the calendar gestures handling, but they will have a lower priority than the ones of the GestureManager.
API Changes

We also improved the Telerik Chart for Android during the period after the Q3 release. We improved the performance of the DateTimeContinuousAxis. The CartesianChartGrid now has setters for vertical axis and horizontal axis, which allows it to be used in a chart with multiple axes.

We also made some fixes that were causing points to disappear while panning and zooming. The issue where the Chart was blinking when refreshed frequently is also gone.