How Do You Fiddle?

Fiddler is the beloved network proxy for countless developers. We look under the covers to explore various flavors of Fiddler and how it continues to serve developer needs.

Developers should never be in doubt as to what happens in the network stack. This, however, is easier said than done today, with a plethora of app platforms/devices to build for. Developers need a consistent visual interface for productivity and demand visibility of network traffic while building wide variety of apps. There is only one way to achieve this—look under the covers.

Enter Telerik Fiddler, the free web debugging proxy for any browser, system or platform. Fiddler has been extremely popular in the developer community and has evolved a lot over the years. Let's take a close look at what Fiddler stands for today and how it can alleviate network stack pain for most developers.

The need to inspect network traffic is nothing new and over the years, lots of tooling has been built for developers. The wonderfulness of Chrome DevTools is available to any developer using Google Chrome or Microsoft Edge browsers on any OS. If working with web-based APIs, Google's Postman tool provides a great way to build, test, authenticate, mock and validate API endpoints.

However, nothing beats the flexibility of complete network visibility—no matter what type of app developers are building. And for that, one has to go under the covers and use a network proxy. In the words of Gandalf the Grey: "You shall not pass" unless you go through me! That's the purpose of a network proxy and that's what gives developers full visibility. 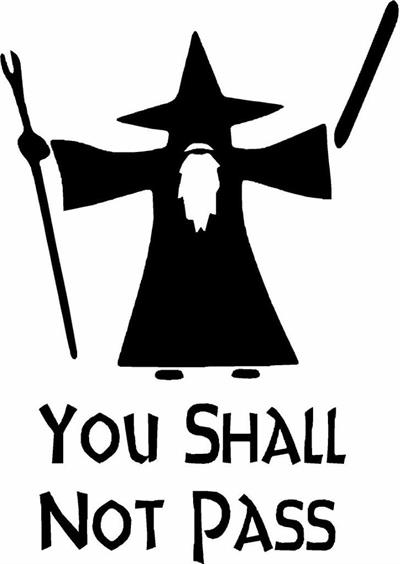 Fiddler had humble beginnings with Eric Lawrence and is now maintained by exceptional engineers at Progress Software. Over the years, Fiddler has garnered a huge and loyal developer community, and is used today by hundreds of thousands of developers. A lot of folks are nostalgic about Fiddler—a tool they have used from early days to a mature career in software development.

While several API/network sniffing tools are now around, nothing quite beats the full visibility offered by Fiddler. Simply put, Fiddler let's you fiddle with network stack—some key benefits include:

Fiddler's stance is simple - the free web debugging proxy for any browser, system or platform. That is a lofty promise though. To do so, Fiddler offers the flexibility to be different things for different needs. This in fact, defines the ethos of modern day Fiddler—steady evolution to serve a variety of network proxy needs.

So you've never tried Fiddler and now excited to get started? Great—but pause for just a bit to make sure you are using Fiddler exactly per your needs. There are some flavors to choose from ...

Fiddler on Windows is the original—AKA the beast. What started out as a simple desktop application to act as a network proxy, evolved over years to be the most feature-rich Fiddler anywhere.

Fiddler on Windows got a much-adored new logo several years back and continues to rock. If you are on Windows OS, you can continue using the default Fiddler Classic app, but with an open mind towards trying out something new for future.

So, you may ask, why should all of Fiddler goodness be restricted to developers on Windows OS? Touché. In fact, the demand for Fiddler outside of Windows continued to be most requested feature for quite some time. Thanks to crowdsourcing, the message was heard loud and clear. Yes, it took engineering efforts and investments, but Fiddler is finally ready to shed its old skin and step out onto whole new world.

A new version of Fiddler is now available to download for Mac, Linux & Windows. Yes, you heard that right—we'll wait if you're hearing this for the first time and need to pinch yourself to believe it. Fiddler Everywhere is still in Beta—you should try it today and provide feedback to help shape the new Fiddler. Fiddler Everywhere is clearly the future and will see the most innovations.

The challenge, however, is to make the new Fiddler as good as the original Fiddler on Windows. This is not a small ask and demands the recreation of a decade's worth of prioritized features—efforts are underway to carefully build back all the things you have loved about Fiddler, just available everywhere.

Even in the early days though, Fiddler on Mac or Linux is beautiful—native and imbibing the spirit of the platform OS. Curious how Fiddler works everywhere? Hint, it is a cross-platform app—we'll let you tinker around and report how you think it is built :) 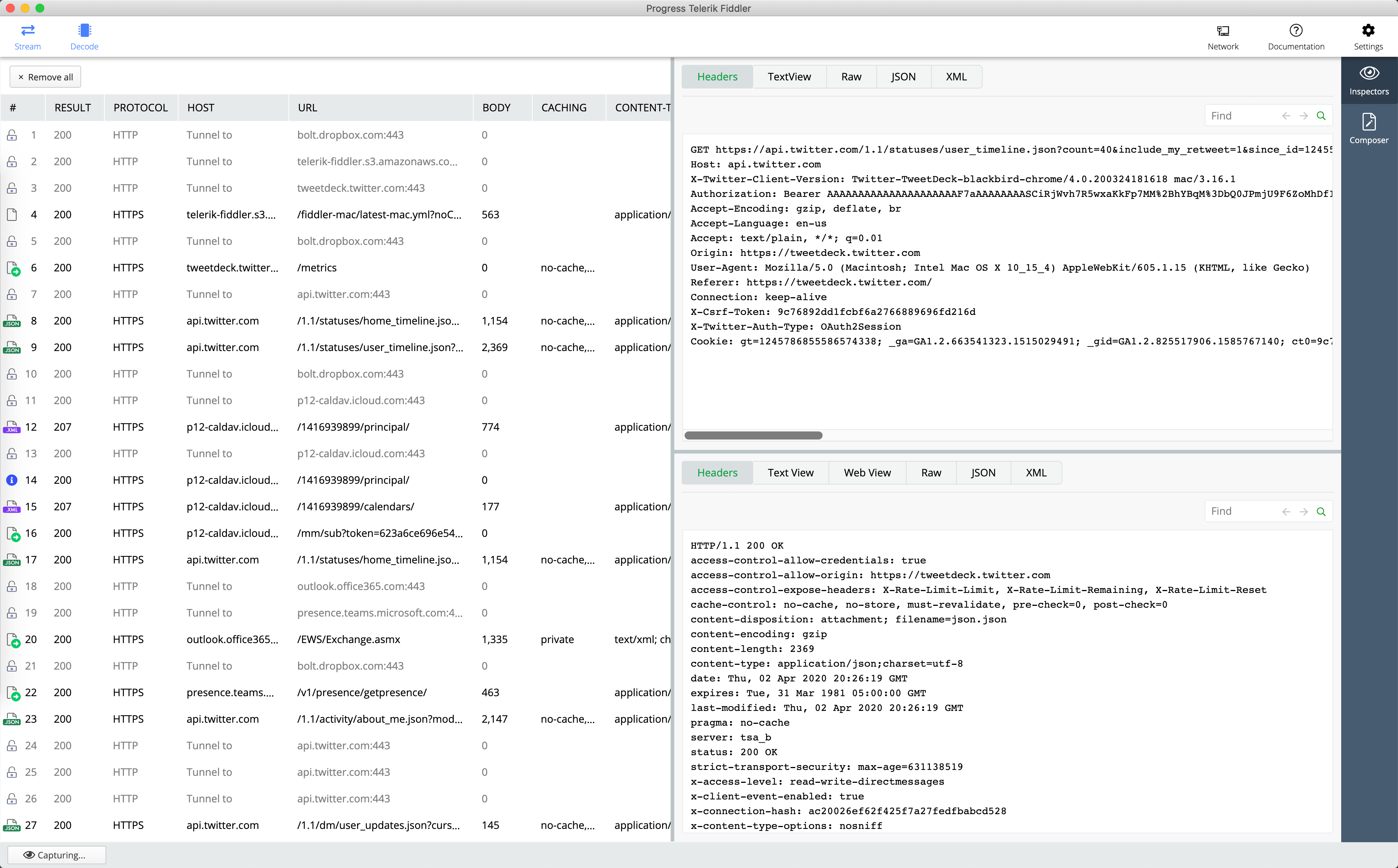 PS: You are on Windows and wondering if you should hop onto using the new Fiddler? You could. Classic Fiddler will be maintained as usual, but you can try out Fiddler Everywhere and provide feedback to shape the future. While a single code base for all of Fiddler is desirable, nothing would be rushed until there is prioritized feature parity everywhere.

Nerdy readers may also wonder: how are Fiddler features working consistently in every OS? The answer is abstraction - seperating Fiddler's features from its UI. Most of Fiddler's core functionality has now been extracted out into a single .NET library and it is .NET Standard compliant. Welcome to FiddlerCore—the engine that powers Fiddler. The best part: you can now embed FiddlerCore in your .NET Framework or .NET Core apps and benefit from all of Fiddler's power just baked inside your app. Envision the use cases—dashboards, client support, monitoring and testing.

Here are some benefits FiddlerCore brings to the table, and it is ready for use right now.

Have you ever had bug reports from users that you simply cannot create on your end? Yup, constant black magic in software world, since you simply may not know all the variables while the user is running your app. Guess what would help—web traffic logs. Telerik FiddlerCap is here to help.

FiddlerCap is a lightweight standalone web recorder app for Windows. Simply run this yourself or have the user run it for you. The simple UI allows for clearing cookies/caches before recording traffic and exporting the capture as a file. Load up the capture and you have a precise view of all the parameters that lead to the bug or crash as the user ran your app. 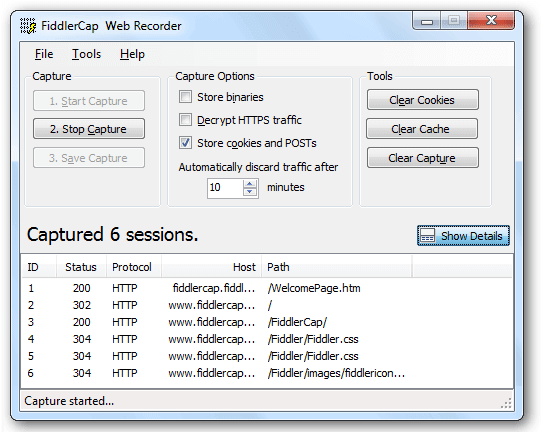 For years, Fiddler has been the beloved network proxy tool for countless developers. This is love and a responsibility not taken lightly by the engineers maintaining Fiddler. Fiddler continues to evolve and stick to the ethos of serving all developers across any platform. While Fiddler on Windows continues to be the one to live up to, Fiddler Everywhere brings out the dream of being cross-platform, yet feel completely native on Mac OS, Linux and Windows. Fiddler Core is another exciting development, providing developers a way to embed the full power of the Fiddler engine in their apps.

The future of Fiddler is bright and you get to shape it with your feedback. Go ahead developers—you got this network visibility thing in your bag. Time to build some amazing apps!