The Case For Kendo UI

A safe and diplomatic strategy used by developer advocates, such as myself, is to promote a product by only speaking of its merits while sidestepping a direct comparison with its competitors. This is a legitimate and even honorable strategy. After all, all software is someone's labor of love and there is no such thing as a zero sum game in any industry. However, there comes a point when, in order to advocate the quality of something, one has to compare it to something else. Without a comparative analysis, determining a definitive quality among competing solutions is nearly impossible. And pragmatically speaking, it's plain human nature to ask the question, "which is the best?"  Developers rightly ask this question in the context of UI widget toolkits, and an answer should be proposed while maintaining diplomacy, but also seeking a true comparison.

My conclusion is that, Kendo UI is the highest quality, commercially available jQuery-based UI widget toolkit for front-end developers. In this article I will present a formal argument defending this conclusion.

The presentation of a formal argument is not exactly what most readers are accustomed to. I would imagine that some readers will think I've gone to an unnecessary extreme. My goal is to remain as factually objective as possible. I believe the formalities associated with having to form a proper argument will help me remain objective.

Let's jump to the core of the argument by laying out some specific facts about Kendo UI and then establish the premises for my conclusion. I have also provided definitions for the terms used throughout this article and presuppositions I am using to make comparisons. These are available in the appendix to this article in case you are looking for additional context and clarity.

I will begin my argument by declaring a set of Kendo UI facts that give authority to my premises.  These facts are purposefully terse and to the point, focusing on the common criteria used by front-end developers when evaluating a UI widget toolkit for development.  I have gone to great lengths to make sure these facts lack any potentially subjective slopes which could negate my forthcoming argument and, thus, my conclusion.

The following Kendo UI facts are divided into 3 categories:

1.2 - Kendo UI widgets are exposed as jQuery plugins A jQuery plugin is a non-standard method added to the jQuery's prototype object (e.g. jQuery.fn.method) with the intention of using the method on an HTML element or collection of HTML elements (e.g. $('div').method()).

1.3 - The bulk of Kendo UI is free and open source (Apache 2.0 License), but it contains a small, rich subset of commercial UI widgets Most of Kendo UI is free (under the name Kendo UI Core), and can be found on Github under the permissive Apache 2.0 license. Telerik also offers a set of commercially licensed (under the name Kendo UI Professional) DataViz widgets (i.e. charts, gauges, barcode, QR code, stock chart, and treemap widgets) and the following Web widgets:

1.5 - Kendo UI widgets can optionally be instantiated via jQuery method calls or data attributes (aka Declarative Instantiation) Kendo UI widgets can be created by invoking a method (i.e. jQuery plugin mehtod) on a jQuery object (e.g. $('div').kendoCalendar();) or by using Declarative Initialization (i.e. initializing widgets and configuring those widgets with data-role attributes).

Below I show an example of using Declarative Initialization to create a NumericTextBox widget: 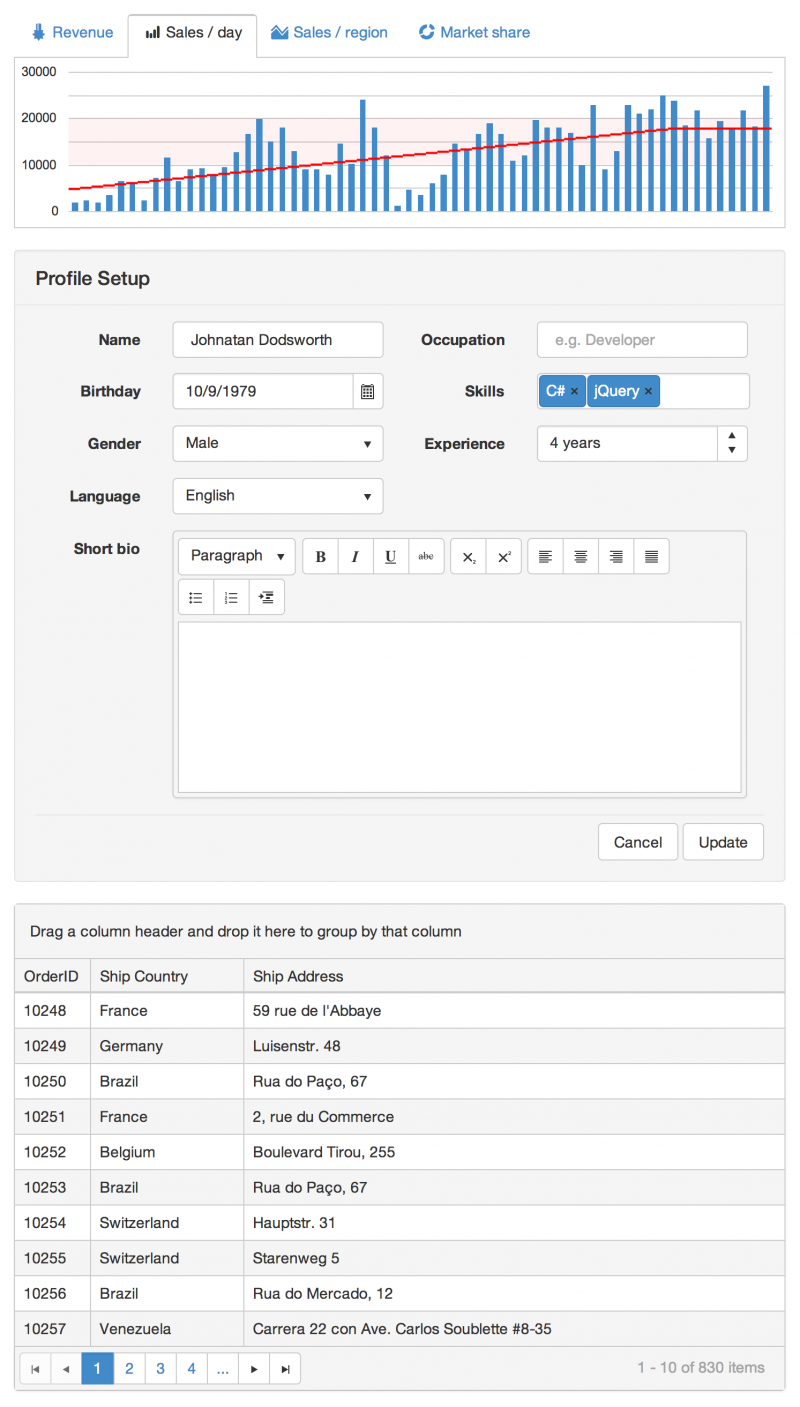 1.7 - Kendo UI contains a class of data visualization widgets (aka DataViz) DataViz widgets are SVG-driven and automatically fallback to HTML Canvas or VML rendering when SVG is not supported. 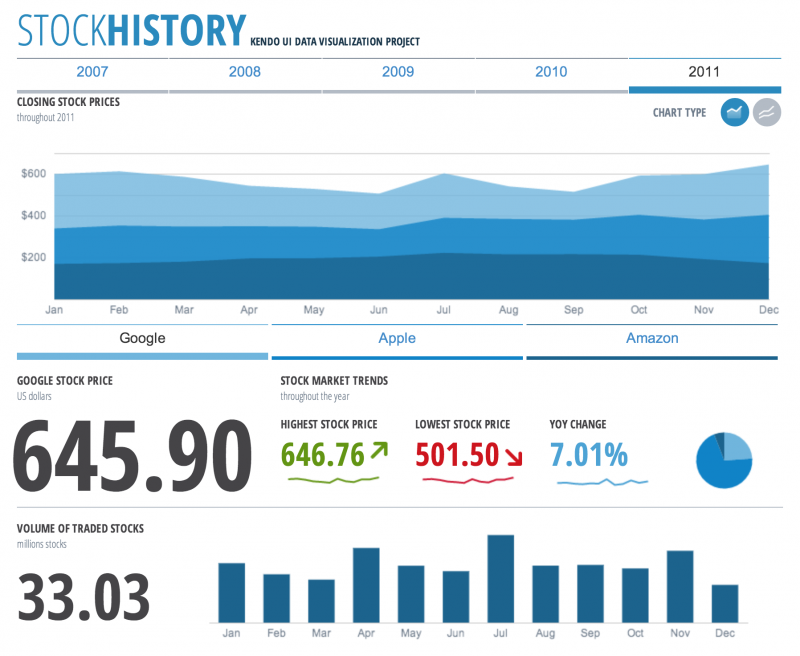 1.8 - Kendo UI contains a class of mobile-centric widgets for phones and tablets Mobile widgets are supported on Android 2.3+, iOS 6.0+, BlackBerry 10.0+, Windows Phone 8.0+, and Chrome for Android. 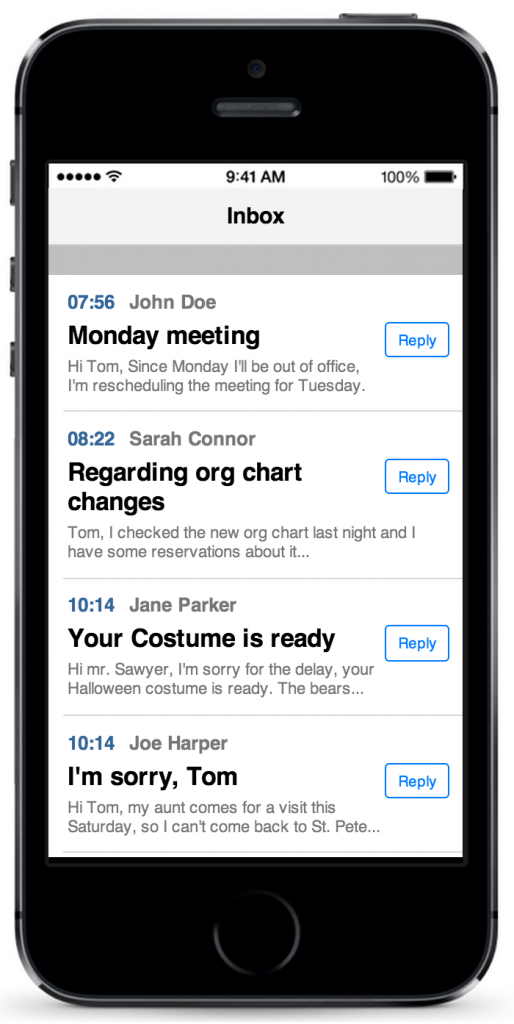 1.9 - Telerik provides a getting started documentation for each widget The Kendo UI "Getting Started" documents are separate from the API reference.

1.10 - Multiple demos for each widget Each widget is accompanied with multiple code demos which are immediately editable in an official online code editor (aka Kendo UI Dojo) tailored for Kendo UI widgets.

1.11 - Official Chrome developer extension An official extension to the Chrome browser is provided to aid in debugging and configuring Kendo UI widgets. 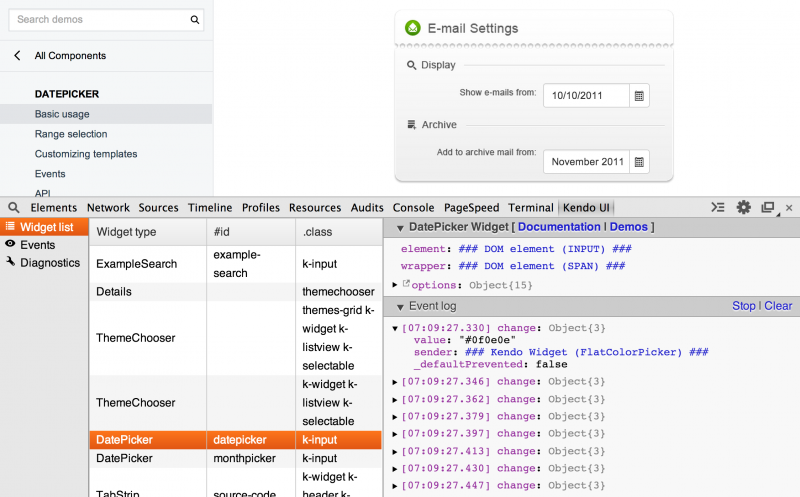 1.12 - An official CDN is available for Kendo UI static assets (images, fonts, CSS, JavaScript) Both minified and bundled files, as well as all the source files, are available on the CDN.

1.13 - Cultural packs for doing globalization on the Calendar, DatePicker, TimePicker, DateTimePicker, and NumericTextBox Widgets Kendo UI provides culture specific overrides (aka Globalization) for widgets that make use of number formats, week and month names, and date and time formats.

1.14 - Localized widgets By default, all widget messages are in English. This can be overwritten by including a language specific kendo.messages.<language>.js file along with your Kendo UI code. Kendo UI offers 20 official language packages or you can create a custom language specific file with the necessary translations.

1.16 -  Kendo UI officially integrates with AngularJS Kendo UI has official directives for AngularJS that initialize an element as a Kendo UI widget using imperative initialization, allowing you to take full advantage of Kendo UI within the context of an AngularJS application.

2.2 - Full WAI-ARIA support Following the W3C's "Widget Design Patterns" in the WAI-ARIA specification, Kendo UI will automatically add WAI-ARIA support when the appropriate role value and additional attributes are needed.  For example, examine below the changes made to a number input when it's converted to a Kendo UI NumericTextBox widget.

Initial number input before a Kendo NumericTextBox is initiated:

2.7 - High-contrast CSS theme for users with low vision or other visual disabilities 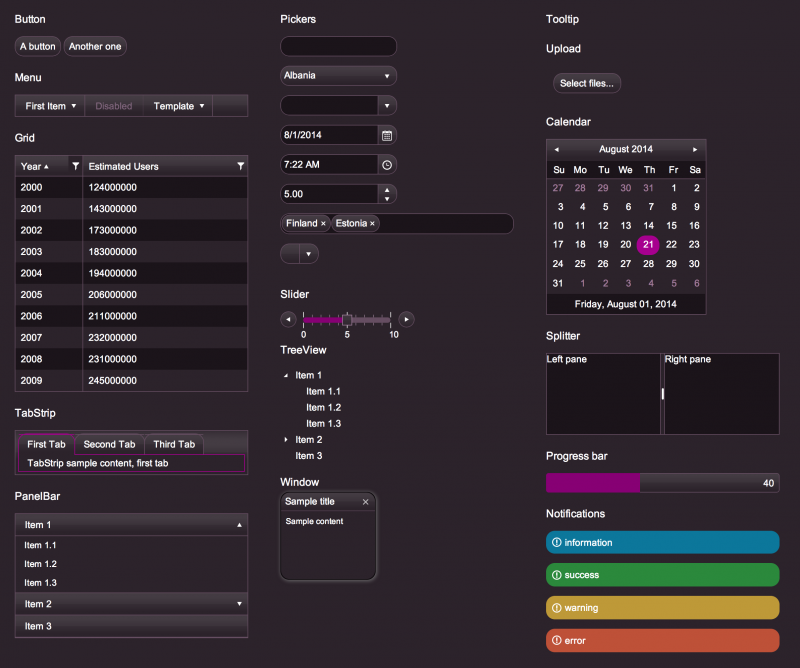 2.8 - All Kendo UI widgets are developed to function on touch interfaces The Web widgets and DataViz widgets have built-in support for touch events.  They remain functional on a tablet or phone.

3.1 - Mobile widgets are officially supported on laptop and desktop web browsers Mobile-centric widgets are not for mobile and tablet devices alone; they can be used alongside the Web class of widgets in IE10+, Firefox Latest, Chrome Latest, Opera 15+, Safari 5+ web browsers on Windows XP+/Server 2003+ and OS X latest.

3.3. - Mobile widgets will automatically adapt to a device's operating system by default (aka Adaptive Rendering)

In order to make claims of quality, I had to do a comparative analysis of Kendo UI's direct commercial competitors. The table below takes many of the Kendo UI factors just mentioned, and reveals how the competition stacks up against Kendo UI. If the table is overwhelming, consider skipping it for now.  What is important is that most of the claims found in my premises are pulled from analyzing this table of data.

Premise 1:  As a commercial solution, Kendo UI provides the most comprehensive set of options for including Kendo in a web page.  You can include Kendo UI in one of the following four ways:

This makes Kendo UI the most versatile commercial solution for developers of varying skill, creating varying types of projects, from simple web pages to complex applications.  Additionally, options 1-3 above can be done locally or by using an official CDN.

Premise 2: Kendo UI is one of two commercially sold toolkits offering a subset of completely free widgets (core widgets) for commercial use (unlimited developers, unlimited sites, for hobbyist or companies), backed with the same updates, maintenance, browser documentation, demos, and quality as the commercially-sold widgets.  All of these are licensed under the permissive Apache v2 license and can be installed using Bower or forked/downloaded from Github.

Premise 3: Kendo UI offers the most complete set of UI widgets and tools that go anywhere and do anything on any platform, handheld device, or computer (i.e. Web, DataViz, Mobile, and Framework-like tools).

Premise 4: Kendo UI is one of the few commercial libraries that provides an open source channel to download, build, and contribute to a portion of the toolkit (via Github kendo-ui-core).

Premise 5: Kendo UI offers the widest range of support materials beyond the typical API document associated with a widget. Consider:

Premise 6: Kendo UI is the only toolkit offering developers a Chrome DevTools extension for debugging and programming widgets.

Premise 9: Kendo UI is one of only two solutions in the space that provides data visualization widgets which render in SVG where possible, and Canvas or VML when needed.

It's the totality of the aforementioned premises that has lead me to my conclusion.

My conclusion is that Kendo UI is the highest quality commercial jQuery-based UI widget toolkit for front-end developers. The quality of an argument is judged by its premises and the objective nature of the facts that support each premise. If the premises are true and indisputable, then the conclusion that follows is more than likely true. Do my premises inconclusively lead to this conclusion?  Well, no, not absolutely. The argument technically does not result in an indisputable conclusion. Therefore, a judgment call is necessary. You be the jury.  I've presented the argument.

Fact: a thing that is indisputably true.

Argument: logic built upon rational premises that lead to a conclusion.

Premise: a previous statement from which another is inferred or follows as a conclusion.

Objective: not biased by personal feelings in considering and representing an argument.

Subjective: an argument that is influenced by, personal feelings and tastes.

Qualities: the standard of something as measured against other things of a similar kind.

Factors: a circumstance, fact or influence that contributes to a result or outcome.

Official: from the source, while independent is from third parties.

Presupposition: something tacitly assumed beforehand at the beginning of a line of argument.

Below are the details of the criteria used to make the competetive comparison.