The latest release of Telerik Platform is here. All the time-saving tools and services you've been using to create hybrid apps, now also optimized for native app development.

As the fastest growing Telerik product in history, you've come to expect a lot from the Telerik Platform. When our journey started a few years ago, we released a cloud-based toolset that focused on the up-and-coming hybrid app development model. Back then our mantra was, "Use your web skills to create hybrid mobile apps." And guess what, that's still our message, because you can now use your web skills to create native mobile apps as well!

Today we're pleased to announce the latest release from the Telerik Platform. This major update focuses on the growing need to create engaging mobile experiences by leveraging native device functionality without compromising app performance. Imagine all of the time-saving Telerik Platform tools and services you've been using to create hybrid apps, but now also optimized for native app development.

Before we start, you should know that we have a free webinar coming up on April 27th! In this presentation we'll be providing a lot more in-depth content about this Telerik Platform release, along with more information about NativeScript (not to mention, some huge raffle prizes for attendees!).

You may already know that we've been developing an open source framework called NativeScript which lets you create truly native mobile apps using JavaScript and CSS. While we've had support for NativeScript in the Telerik Platform for some time now, the experience wasn't quite as mature as the hybrid one. And up until now, NativeScript developers were limited to using the NativeScript CLI to build and emulate apps.

This all changes today, as we bring NativeScript development up to speed and also introduce numerous code-free tooling and service options to boost your native mobile app development process.

Enough of the fluff, let's get into the details!

Want to impress your co-workers by leveling up on your native app development skills? By using Telerik Platform you'll be doing just that.

Writing code is where you probably expect to find the most improvements from our tools, and we won't disappoint. When developing NativeScript apps, you can take advantage of the new auto-completion features in all of our clients:

You can also drop TypeScript definition files into your project and automagically take advantage of auto-completion for a variety of JavaScript libraries and frameworks! 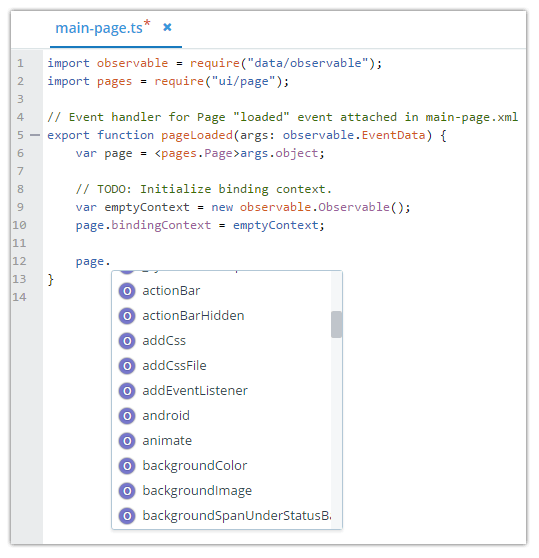 We are also introducing support for NativeScript 1.7. You can read all about the improvements, but suffice it to say there is some pretty amazing stuff there (including a preview of Windows support and an alpha release of the Angular 2 integration!).

What about debugging? Native app debugging used to be a bit of an arduous process, but today with NativeScript and the Telerik Platform, you can set breakpoints and debug your apps on any connected iOS or Android device: 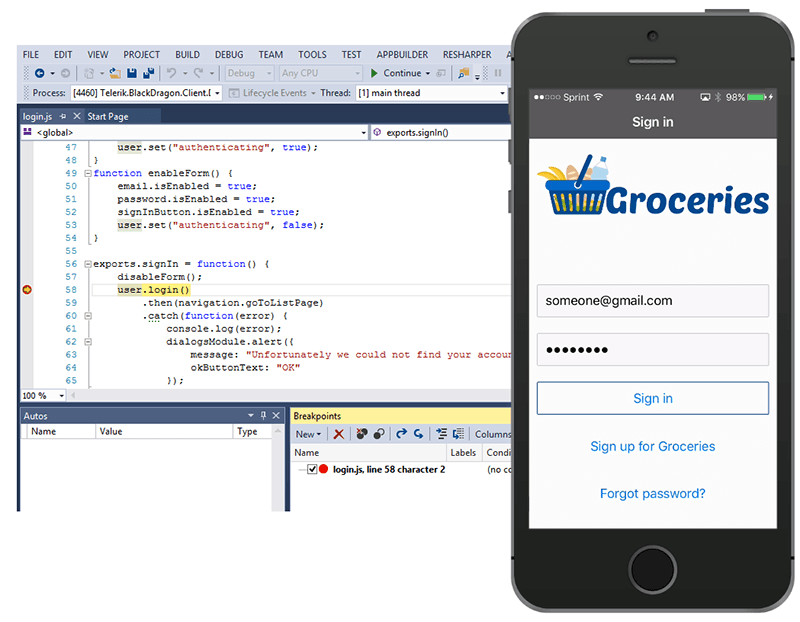 Ask any .NET developer out there today and most of them will know Telerik for our wide array of UI controls. That's why we feel strongly that leading with a strong UI offering is critical for the success of NativeScript. We recently released a new product we call Telerik UI for NativeScript, which contains four time-saving controls (with more on the way): 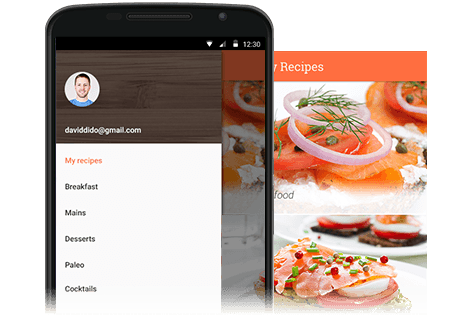 One of our most popular features is the Telerik Platform Companion App. Available for iOS, Android and Windows Phone, the Companion App lets you test your app on any device without having to deal with the mess of provisioning, certificate management, and app deployment.

When it came to NativeScript development, we used to have a separate NativeScript Companion App. Today we have ONE Telerik Platform Companion App and two separate "player" apps for Cordova and NativeScript apps. We set it up this way to provide the most flexibility and new features to improve your experience, such as the ability to: 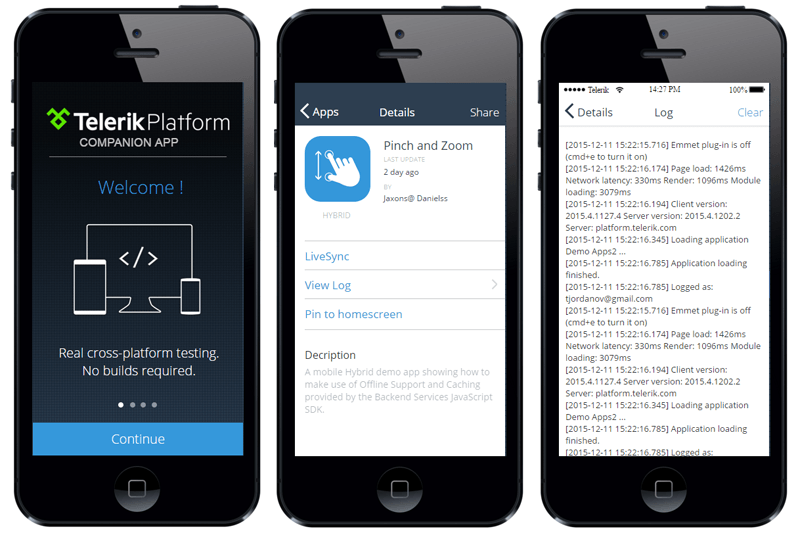 Download the new Companion Apps today for iOS and Android. 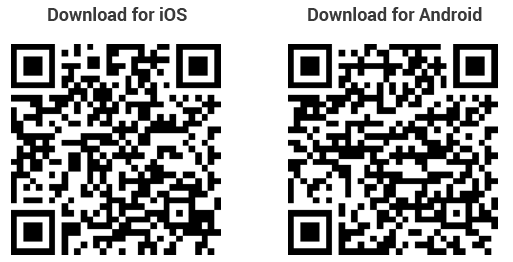 Last time around we announced the public beta of our new cross-platform Universal Desktop Client (available today for Mac and Windows). We've made some big steps on our way to the 1.0 release, most notably:

Look for some major updates from our Universal Desktop Client in the near future, such as:

The "Views" module of Telerik Platform (formerly known as Screen Builder) is often the first stop when creating a new app. Using this code-free visual development tool lets you pick and choose (and customize) a variety of pre-wired view templates. Views is getting a big boost this time around because not only is it compatible with NativeScript (yes, that means you can scaffold the majority of your native app before you start coding!) but we're also introducing a variety of new and improved features: 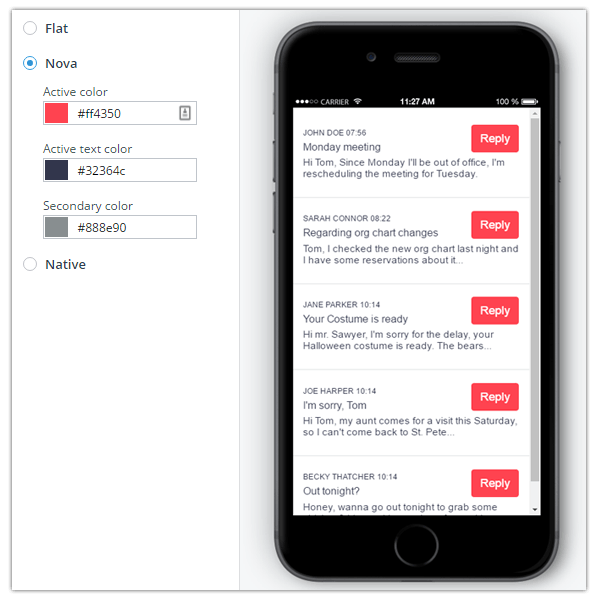 And No, We Haven't Forgotten About Cordova!

While this release obviously focused on bringing NativeScript up to speed, we have an unwavering commitment to Cordova and hybrid app development. Updates such as our revamped Companion Apps apply equally to both hybrid and native app models—we've also provided the latest (stable) Cordova v5 bits. Looking forward, we will fully support both hybrid and native development in the Telerik Platform.

And remember, the future of the Telerik Platform depends on you and your feedback! Sound off on our feedback portal if there is something you feel like we are missing or something we could do better.

Thanks so much and don't forget about the upcoming Telerik Platform webinar where we will dive much deeper (and give out some amazing prizes!).