Fiddler Jam is now capable of recording video from your browser tab. The enhanced video recording feature ensures every detail is captured to reproduce end-user bugs rapidly. While the video recording and capturing screenshots features are enabled by default, an end-user can easily toggle these settings on or off right from the extension.

The shared video log, sent via the link, includes a numerated list of the captured HTTP/HTTPS sessions, screenshots, browser events, and console logs. Every detail is captured and is easily presented for advanced analysis, empowering support teams to gets tickets out of the queue and move them to “done” sooner. 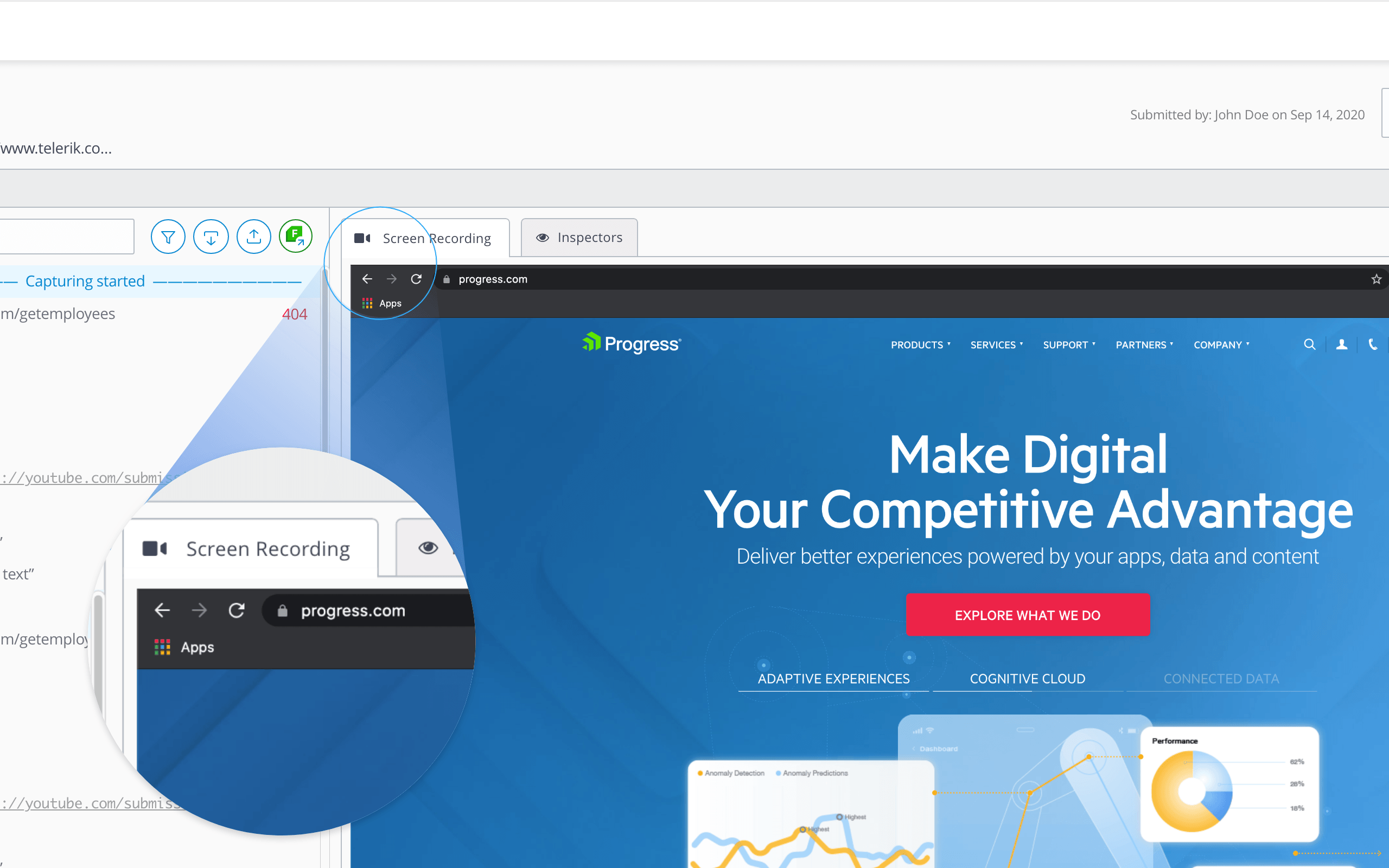 We are further strengthening Fiddler Jam with an advanced security feature—the Masking Sensitive Data option. Up until now, the Fiddler Jam extension automatically masked all data sent to or received from the server, which removed non-sensitive data unnecessarily.

However, this advanced feature is now hyper-focused and searches for any keywords that could contain sensitive information. Sensitive data examples are data whose value might be associated with keys, credentials or credit cards, as well as HTTPS headers that are related to authorization. This way, non-sensitive data stays in the log to aid the collaborative troubleshooting efforts. 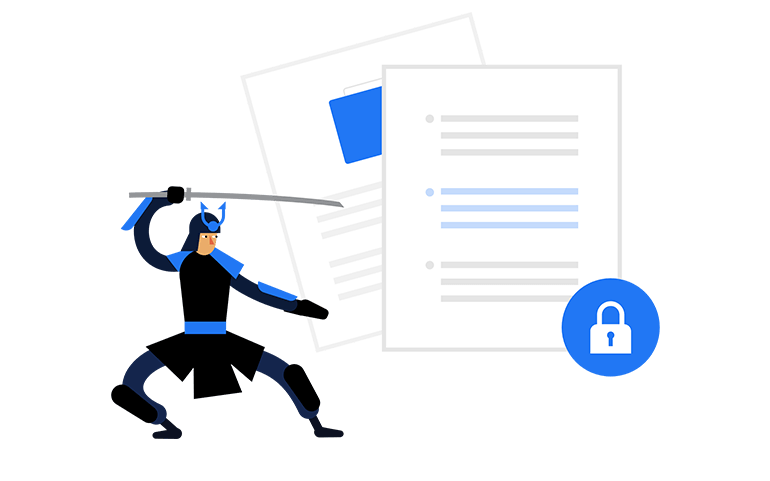 Within the Fiddler Jam Portal, you can now see information about how the end-user interacted with the extension to capture a session. You have visibility into what settings were turned off and on, which ensures the Fiddler Jam extension was used as you instructed the end-user beforehand, without having to make assumptions. 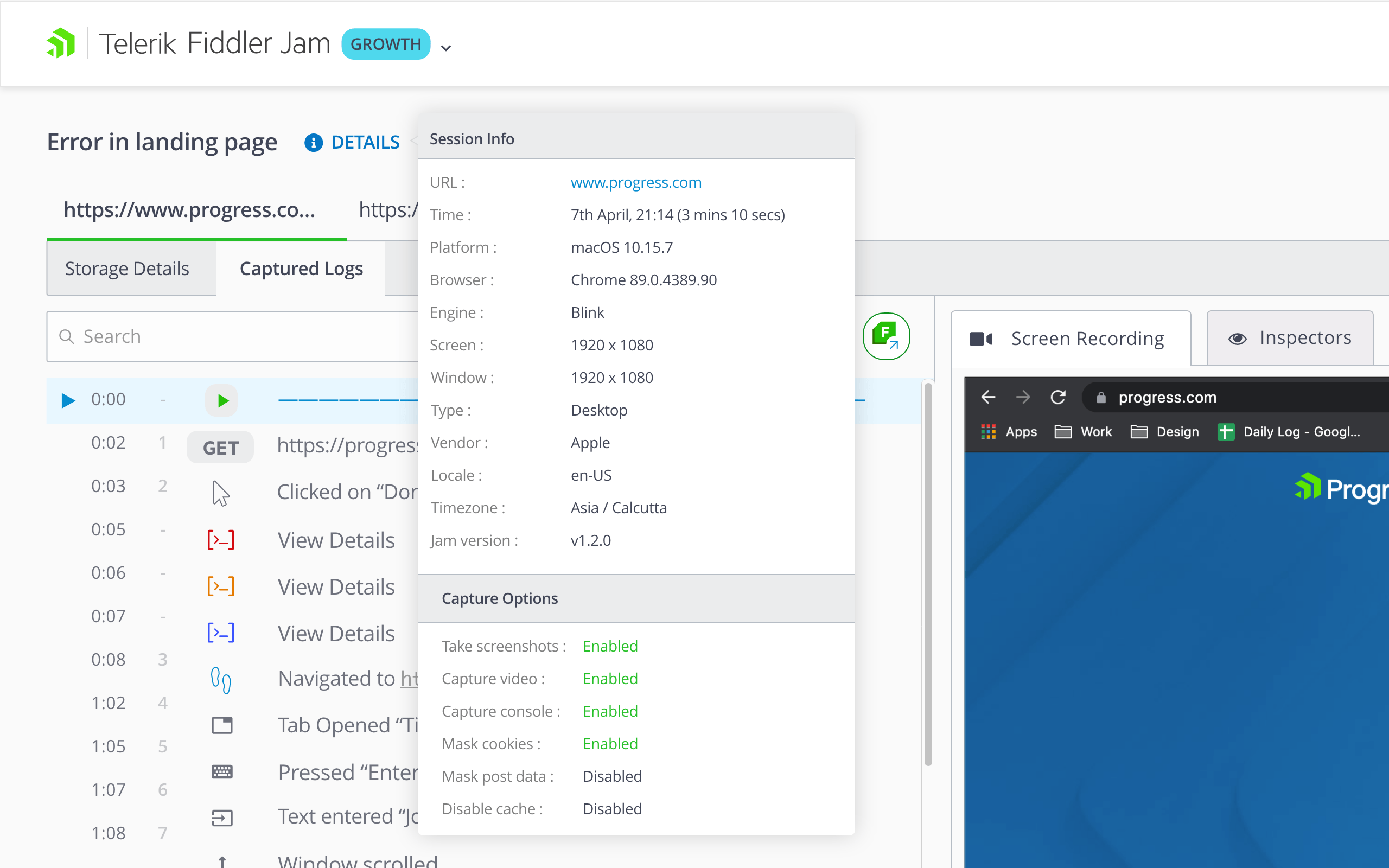 Within this release, the Fiddler Jam extension captures data stored through    both local and session storage when the browser tab session is being recorded by the end-user. When the Capture storage info toggle is on, the team inspecting the recorded log will have additional information pertaining to the data stored on the client-side of the end-user. The broadened details offer crucial insight for identifying and fixing bugs faster. 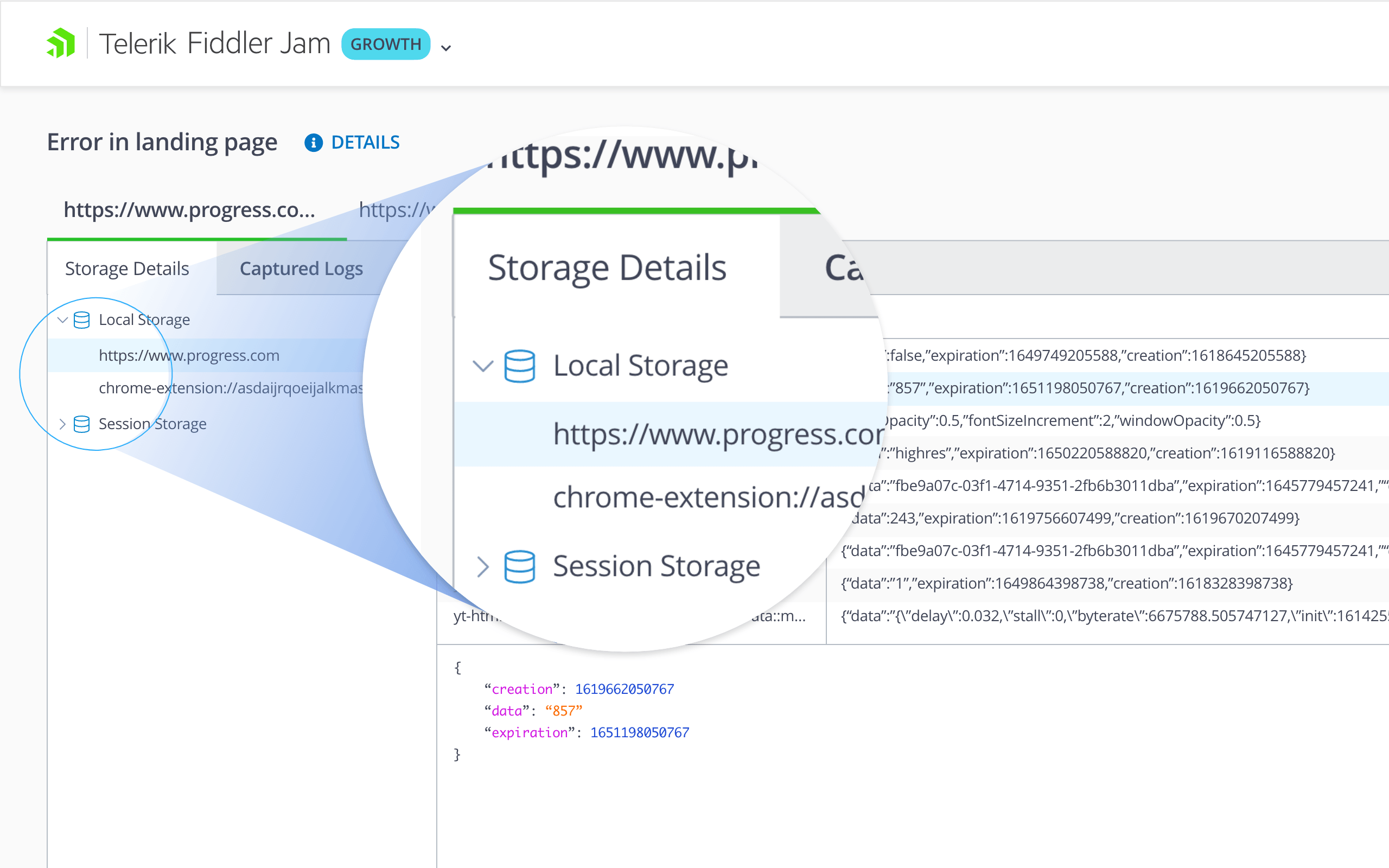 We further enhanced Fiddler Jam with the option to capture user events during a session recording. You can now track actions such as click, double click and Tab opened or closed. This new feature also shows you where the end-user navigated to, pressed "Enter" or hit the "Tab" key and if they scrolled the page up or down. Fiddler Jam also detects if the end-user typed any information in a text field, without displaying the actual content for security reasons. You can see these events in the Captured Logs grid list and get additional technical information for each one, as well as date and time of execution in the Inspectors tab on the right. 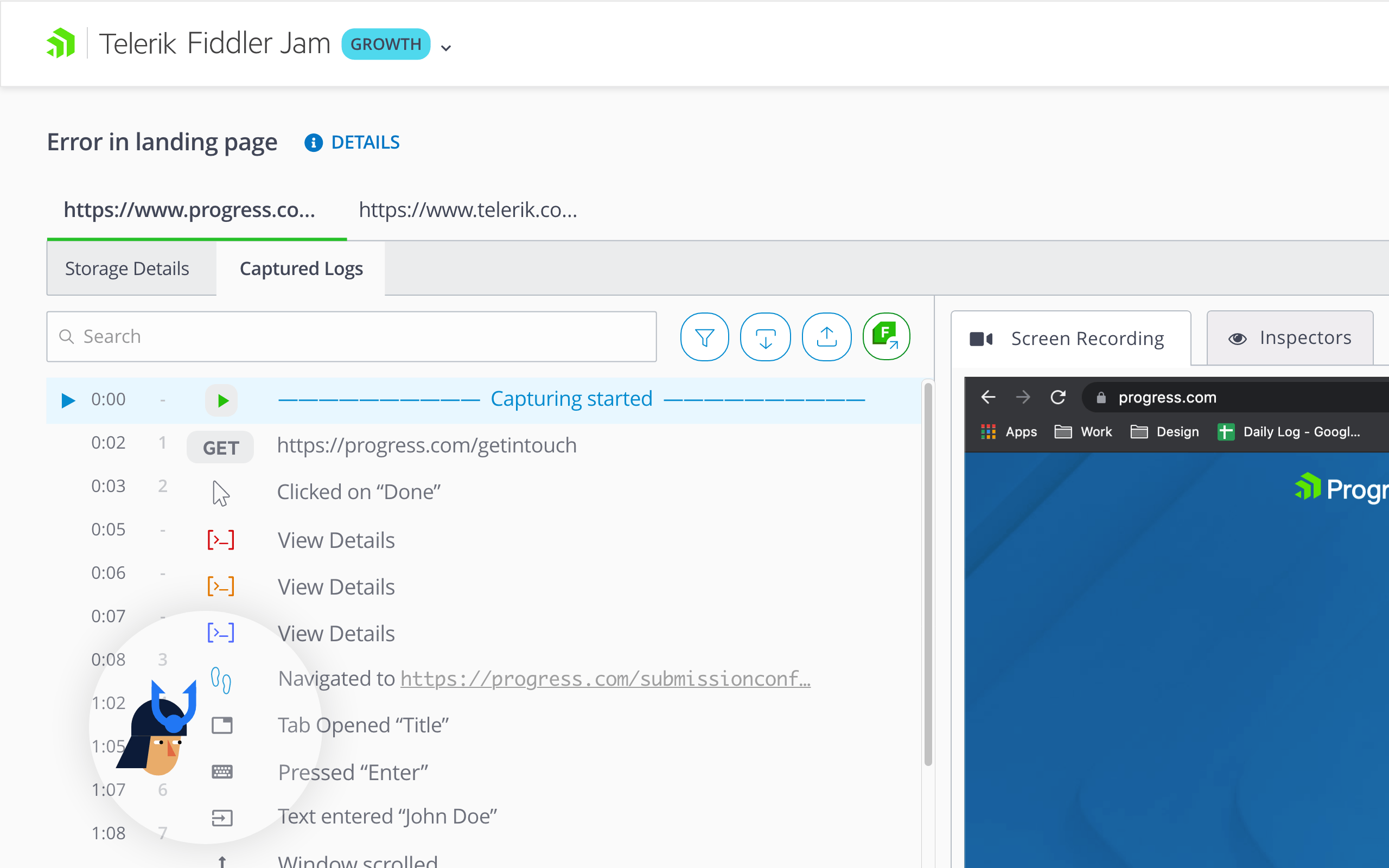 In addition to all the new features in the new Fiddler Jam release, we are also increasing the allowed session recording size limit. With this enhancement, end-users can capture sessions as large as 100 MB with the Jam extension. By increasing the session size capacity, the tool ensures that all information relevant to the issue being reported is captured and included in the recorded Fiddler Jam session. 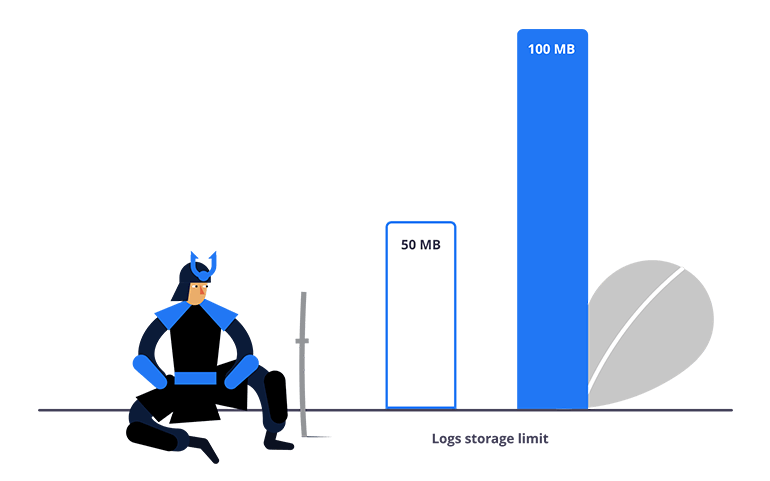 The Fiddler Jam Portal comes with a redesigned layout that can now incorporate multiple tabs for review. If the recorded Fiddler Jam session has more than one tab captured, each recorded tab will be displayed separately with its respective logs.

Along with the logs, there is a record of user actions and screenshots for each tab. The tabs also include insights such as which was the Opener Tab and in what order the user landed on each of the tabs while capturing. The new layout provides a better user experience and allows for a clean and more focused session review and troubleshooting. 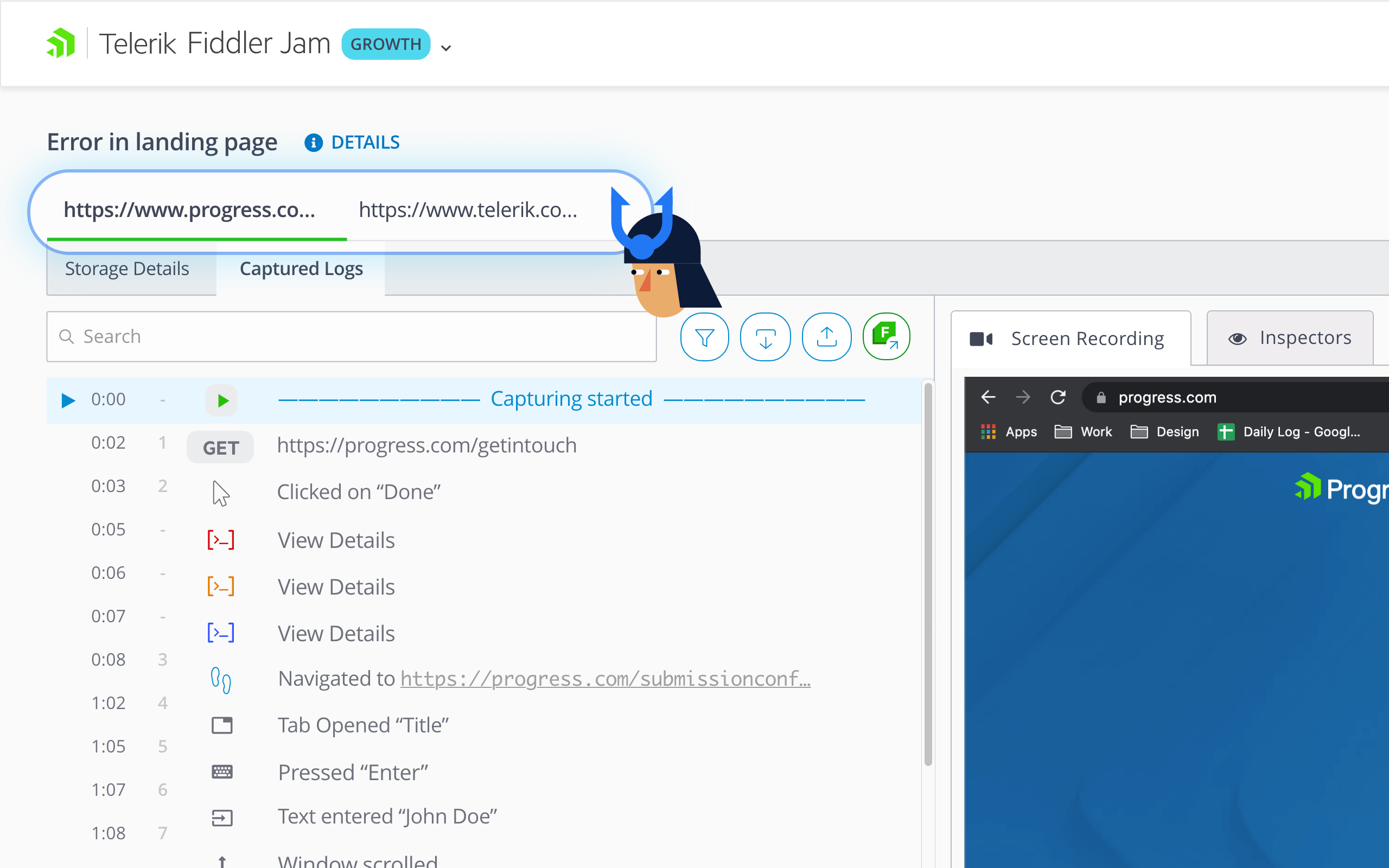