It is 2017, and it is almost criminal to say that your app doesn't work on a given mobile platform. This means, most mobile developers are building cross-platform apps. Xamarin has helped democratize cross-platform mobile development for .NET developers. You get world-class IDEs and tooling to build your Xamarin apps on any platform.

But deploying apps to devices remains tricky - developers often have to deal with native platform SDKs, varying OS versions and device provisioning. It's a pain to get your cross-platform app running on your device!

At Microsoft BUILD this year they announced Xamarin Live Player, which aims to ease some of this pain of deploying apps to devices. Is it the panacea for seamless app deployments across all mobile devices?

Xamarin Live Player promises seamless deployment of Xamarin apps to iOS and Android devices. The goal is to enable faster developer workflows - develop, deploy, test, change, re-deploy and debug - all on your personal iOS/Android device without any hassles or provisioning. You can get started today at xamarin.com/live. There is also a dedicated Xamarin Show episode that can help you get going with Xamarin Live Player.

This promise is not new for cross-platform apps though, just rather complex to pull off given the sheer variety of mobile devices. It is interesting to note that developers using web technologies to build cross-platform mobile apps - both hybrid or native - have had such device deployment tools for a while - the notable ones being Telerik AppBuilder LiveSync and Ionic LiveReload.

One may argue however, that hardcore .NET developers wanting to build mobile apps in C# have never had such luxuries. This is where Xamarin Live Player steps in - bringing continuous deployment and debugging to most iOS/Android devices for Xamarin apps.

Want to get started? The first call to action is to get the Xamarin Live Player apps, available conveniently in the Apple iOS and Google Play stores.

Go ahead, and download the app on your respective phone (as seen on my iPhone above). Note that two of the most prolific Xamarin developers, James Montemagno and Frank Krueger, have had their hands in the Xamarin Live Player app, so you will not be disappointed. Also as a shoutout, James and Frank do this awesome developer podcast called Merge Conflict - give it a listen on your next long drive.

How does it work?

On first launch, Xamarin Live Player will tell you it needs to be paired with a Visual Studio instance running on a computer on the same WiFi network. 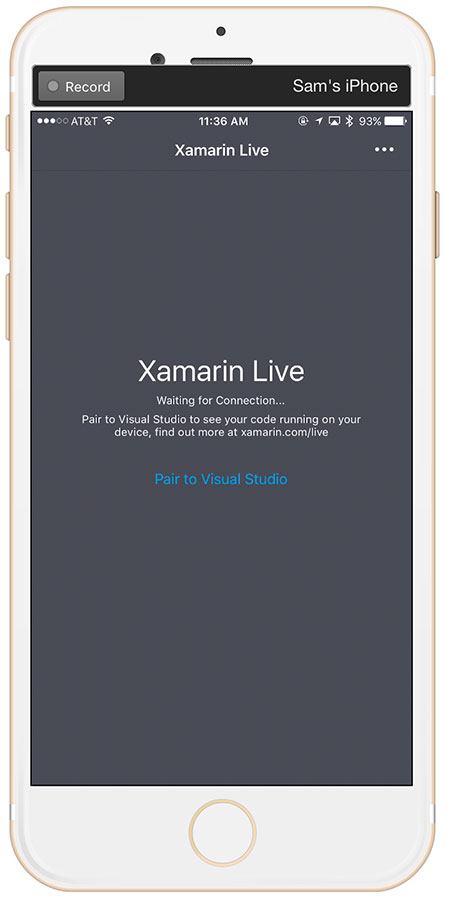 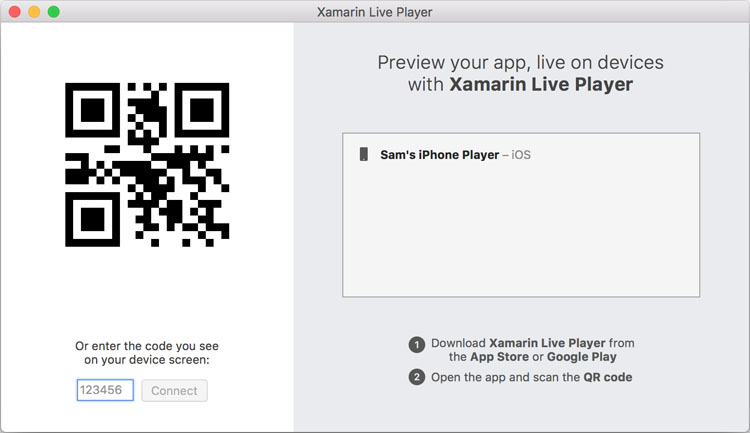 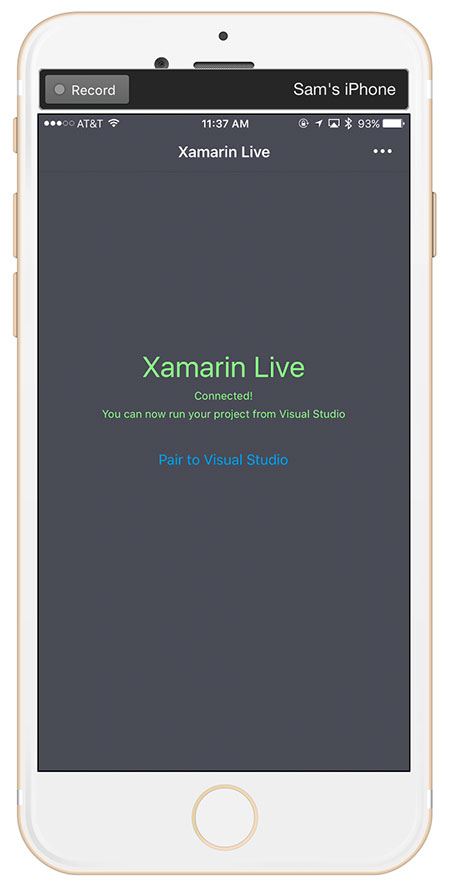 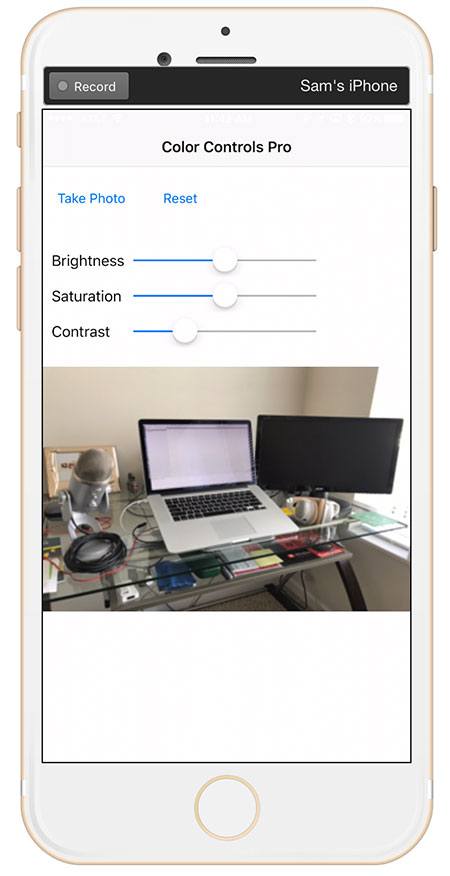 Deploying apps to device after a full build? That's just the basics - what you want is a even more seamless development/debugging experience. What you need is live edits - make continual changes to your code and see it reflected right away in the app running on your device. Xamarin Live Player obliges with a special continuous run mode - the Live Run View.

The idea is that the continuous run mode is per page - you enter it when you want to fiddle around with code on a given Xamarin UI page. The apps's navigation is hidden away and you get to focus on one page at a time. Go ahead and change some XAML markup or even code behind - save your changes and The Xamarin Live Player app seamlessly picks up the code changes that you have made to a given page and the app refresh shows your changes running. Do this continuously and you can see how it becomes an incredibly handy tool to perfect one UI page at a time - update and run your code live.

Is this all sounding a little too good to be true? Well, for the most part, Xamarin Live Player delivers on the promises - but keep in mind, this is still V1 for the product. If you're having a hard time making Xamarin Live Player work for your app, device and IDE, stay calm and read on to make sure you're not running up against known caveats.

Xamarin Live Player has some requirements on the mobile OS front and has a list of supported devices, albeit all modern phones included. For iOS, you'll need iOS 9 or later installed on iPhones or iPads - please check app store listing for compatibility. For Android, you'll need 4.2 and up - again check app listing for support.

There are some app package size limitations with the Xamarin Live Player app. 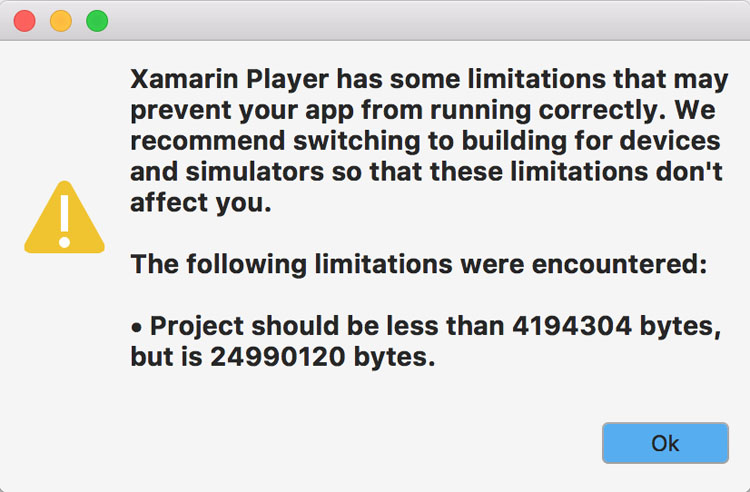 While Xamarin Live Player makes it easy for you to deploy your Xamarin apps to iOS/Android devices, some app customizations are just not possible to test - remember, your app is running inside a shell. These customizations include app icons, splash screens, app extensions and custom widgets. There is also limited support for iOS Storyboards and code reflections.

You still need a Mac

So developing iOS apps through Xamarin has always necessitated the presence of a Mac on the network or in the cloud - the app package for the store has to be built through XCode running on a Mac licensed to the corresponding developer. Xamarin Live Player does a good job of taking the Mac out of the picture for regular development/testing/debugging cycles - you can deploy directly to your iOS devices from Visual Studio. But once your app is ready, you would still need the Mac to build the final app package. Also, apps running inside the Xamarin Live Player are functioning under a wrapper shim - you would eventually want to test true app performance on iOS by doing real deployment through a provisioned device and licensed XCode.

This may trip you up in case you haven't read the docs carefully. Xamarin Live Player, as of now, does not support custom UI renderers for Xamarin.Forms or Xamarin.iOS/Android. If you have had to dip into native platform UI from your app through a custom renderer, this will likely be a stumbling block.

Are We There Yet?

You may ask: Is the Xamarin Live Player ready for primetime yet? Well, the answer is yes and no. One can clearly see the promise of Xamarin Live Player - seamless Xamarin app deployment to iOS/Android devices for continuous core development, debugging and testing cycles. But being in the first wave of product iteration, Xamarin Live Player clearly has some shortcomings. If they are dealbreakers for you, continue what you are doing now for Xamarin app testing and wait for a better future. We developers need not be so cynical - tomorrow still looks to be glorious.

Doing cool mobile app development with Xamarin? Your app will invariably benefit from polished performant UI controls - take a look at Telerik UI for Xamarin and get a free trial to play around. Truly native, truly cross-platform rich UI controls for all your Xamarin apps - your dream app needs good UI.